Balancing protein intake, not cutting calories, may be key to long life 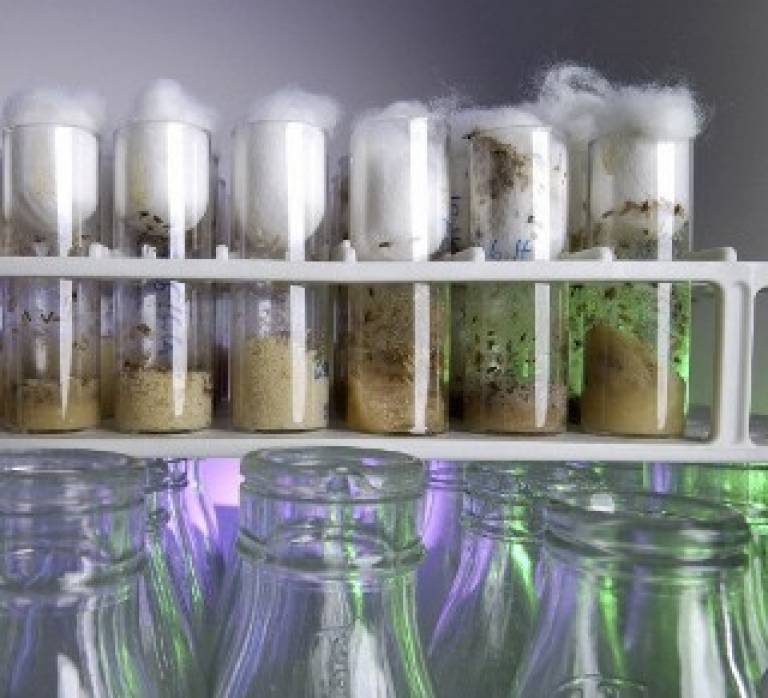 Getting the correct balance of proteins in our diet may be more important for healthy ageing than reducing calories, new research at UCL suggests.

The new study may help explain why 'dietary restriction' (also known as calorie restriction) - reducing food intake whilst maintaining sufficient quantities of vitamins, minerals and other nutrients - appears to have health benefits. In many organisms, such as the fruit fly (drosophila), mice, rats and the Rhesus monkey, these benefits include living longer. Evidence suggests that dietary restriction can have health benefits for humans, too, though it is unclear whether it can increase longevity.

Dietary restriction can have a potentially negative side effect, however: diminished fertility. For example, the female fruit fly reproduces less frequently on a low calorie diet and its litter size is reduced, though its reproductive span lasts longer. This is believed to be an evolutionary trait: in times of famine, essential nutrients are diverted away from reproduction and towards survival.

To understand whether the health benefits of dietary restriction stem from a reduction in specific nutrients or in calorie intake in general, researchers at the UCL Institute of Healthy Ageing measured the effects of manipulating the diet of female fruit flies. The results of the study, funded by the Wellcome Trust and Research into Ageing, are published today in the journal Nature.

In fact, when the researchers studied the effect further, they found that levels of a particular amino acid known as methionine were crucial to maximising lifespan without decreasing fertility. Adding methionine to a low calorie diet boosted fertility without reducing lifespan; likewise, reducing methionine content in a high calorie diet prolonged lifespan. Previous studies have also shown that reducing the intake of methionine in rodents can help extend lifespan.

"By carefully manipulating the balance of amino acids in the diet, we have been able to maximise both lifespan and fertility," explained Dr Matthew Piper, UCL Institute of Healthy Ageing. "This indicates that it is possible to extend lifespan without wholesale dietary restriction and without the unfortunate consequence of lowering reproductive capacity."

Amino acids are the building blocks of life as they form the basis of proteins. Methionine is one of the most important amino acids at it is essential to the formation of all proteins. While proteins are formed naturally in the body, we also consume proteins from many different food types, including meat and dairy products, soy-derived food such as tofu, and pulses. The relative abundance of methionine differs depending on the food type in question; it occurs in naturally high levels in foods such as sesame seeds, Brazil nuts, wheat germ, fish and meats.

"In the past, we have tended to think that the amount of protein is what is important to our diet," said Dr Piper. "We've shown here that in flies - and this is likely to be the case for other organisms - the balance of amino acids in the diet can affect health later in life. If this is the case for humans, then the type of protein will be more important.

"It's not as simple as saying 'eat fewer nuts' or 'eat more nuts' to live longer - it's about getting the protein balance right, a factor that might be particularly important for high protein diets, such as the Atkins diet or body builders' protein supplements."

Because the effects of dietary restriction on lifespan appears to be evolutionarily conserved - occurring in organisms from yeast to monkeys - scientists believe that the mechanisms may also be conserved. This opens up the possibility of using these organisms as models to study how dietary restriction works.

Although the human genome has around four times the number of genes as the fruit fly genome, there is a close relationship between many of these genes. Since it is easy to create mutants and carry out experiments on fruit flies, the functions of many fly genes have been established and newly discovered human genes can often be matched against their fly counterparts. Therefore, even though the fruit fly does not on the surface resemble humans, many findings about its basic biology can be interpreted for human biology.

The UCL Institute of Healthy Ageing is an interdisciplinary centre of excellence for research on the biology of ageing and ageing-related diseases.

The biological process of ageing contributes to increased risk of a wide range of diseases, from neurodegenerative diseases (e.g. Alzheimer's and Parkinson's disease) and cancer to cardiovascular disease (causing heart attack and stroke) and age-related macular degeneration (causing blindness in the elderly). The institute's primary purpose is to bring together researchers working on the basic biology of ageing with those working to understand the causes of ageing-related disease.