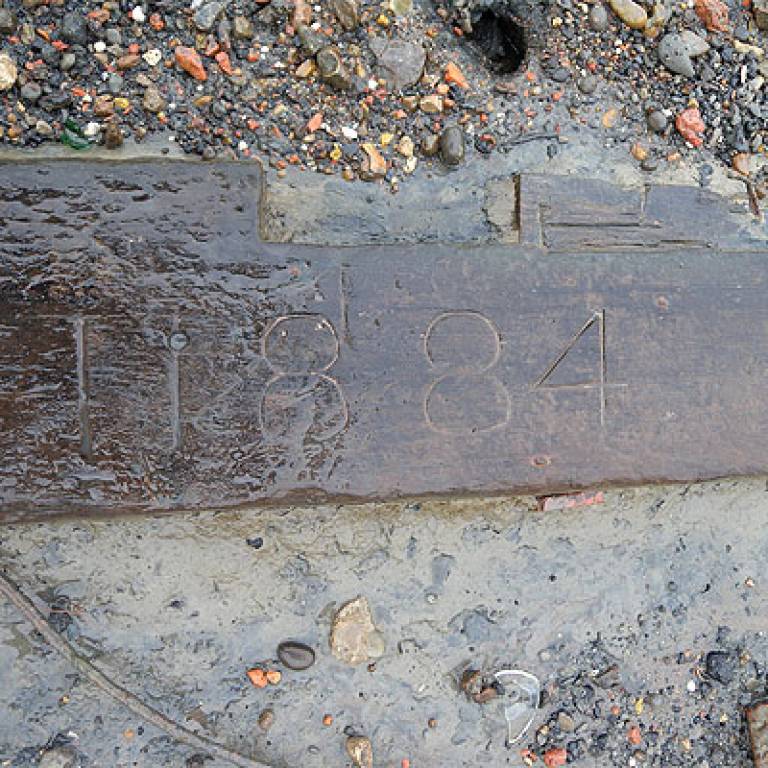 Archaeologists working for UCL's Thames Discovery Programme believe they have found the remains of some of the world's most powerful and famous 19th-century battleships at Charlton, in the shadow of the Thames Barrier.

The programme, led by Gustav Milne of the UCL Institute of Archaeology and supported by the Heritage Lottery Fund, has uncovered large ship-timbers on the open foreshore - the part of the riverbank exposed to weather and the tides - which were once part of a shipyard.

The remains were first observed by the Thames Discovery Programme during a site survey in November 2008. Subsequent research by the Survey Officer Elliot Wragg (also of the UCL Institute of Archaeology) supported the suggestion that the remains were actually elements of a large, 19th-century sailing ships.

Between 1850 and the early 20th century the site was owned by a firm called Castles, which specialised in breaking up ships at the end of their active lives before recycling the large quantities of timber. Records show that one of the last wooden warships broken up at Charlton was the 131-gun HMS 'Duke of Wellington', the largest and most powerful ship in the world when first launched in September 1852. The HMS Duke of Wellington served in the Crimean War and ended active service as the flagship of the Commander in Chief at Portsmouth until 1891, when the ship was replaced by HMS 'Victory'.

The remains of three other large wooden ships are also believed to be among the finds at Charlton. HMS 'Anson', 'Edgar' and 'Hannibal' were all broken up by Castles during the same period. Each ship had 91 guns and was built between 1854 and 1860 at Woolwich or Deptford.

Once the pride of the Royal Navy, these ships became obsolete within a decade because of the dramatic development of battleships clad in iron, and were consigned to the scrapyard from which they are now being reclaimed.

The UCL archaeologists also believe that fragments of the last of the ironclad battleships, HMS 'Ajax', launched in 1880 before the introduction of superior steel-hulled warships, might be among the remains.

For the past two weeks, the team - led by UCL Archaeology alumna Nathalie Cohen and including UCL Archaeology graduates Lorna Richardson (Outreach Officer) and Stuart Brookes (Survey Officer) - has taken advantage of the two and a half hours of low tide each morning to examine the timbers and document their findings.

More than 20 volunteers from the general public, aged 20 to 70, have been trained by the Thames Discovery Programme to help survey the site before the finds are washed away by the river. They have cleaned timbers, photographed the site and drew plans, elevations and timber details. The volunteers - known as the 'Foreshore Recording and Observation Group'  or 'FROG' - are running a blog to record the activities and finds. The team and volunteers will be back in action on the Thames on 14 August.

Gustav Milne explained the next stage of research: "These remains provide our last chance to study the construction techniques used on those vessels, and how they differ from 18th-, 17th- and 16th-century warships.

"We still have more timbers to record, after which the records must be studied to establish how many different structural elements are represented. After that we have to establish if they all could be derived from one parent vessel; and and then continue our research, for example at the National Maritime Museum, to firm up the identification of the source of the timbers.

"We also have to analyse the metal fastenings, interpret the markings on several timbers, and consider the source and nature of the parent trees utilised in the construction."

The scope for research continues beyond these findings, as the foreshore is also home to the remains of a barge hulk to the west and another assemblage of ship-timbers at the eastern end of the site.

The ship-breakers yard at Charlton is one of 20 key sites which will be monitored by the Thames Discovery Programme as part of a detailed archaeological survey of the London foreshore. This project involves recording data from sites at increasing risk from the river's daily tidal scour - an indirect consequence of climate change.

Image: Inscribed timber found on the Thames foreshore is amongst the wreckage being investigated by the Thames Discovery Programme

The Thames Discovery Programme was launched in 2008. It closely monitors the exposed archaeological sites along the river and aims to communicate an understanding and informed enjoyment of the historic Thames to the widest possible audience.

The programme is based within the UCL Environment Institute and the UCL Institute of Archaeology is one of its partners. It is managed by the Thames Estuary Partnership in cooperation with the Thames Explorer Trust. The project is supported by the Heritage Lottery Fund and other partners include the Museum of London and English Heritage.

Conference to explore the use of cultural property in higher education