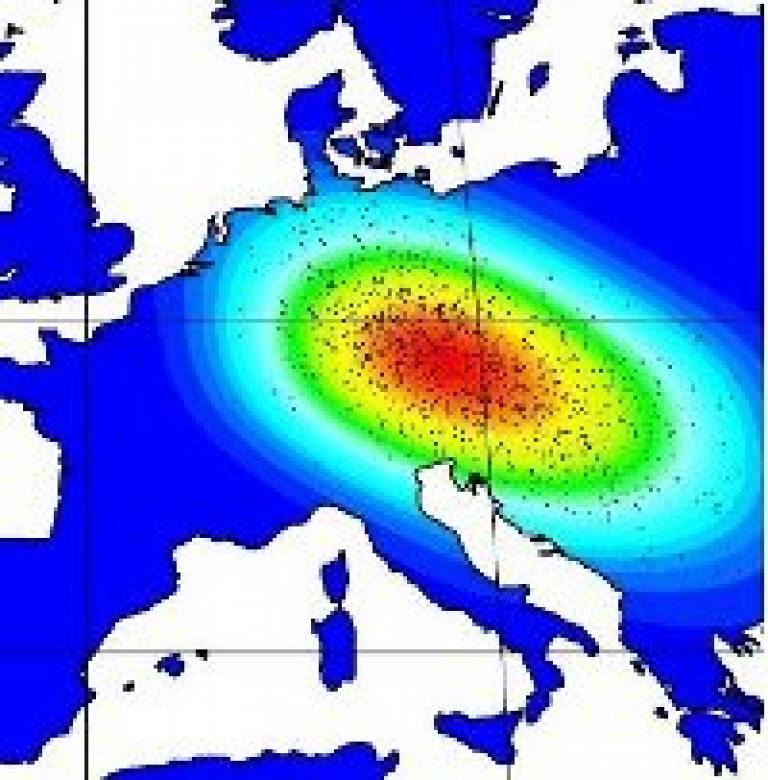 The genetic change that enabled early Europeans to drink milk without getting sick has been mapped to dairying farmers who lived around 7,500 years ago in a region between the central Balkans and central Europe. Previously, it was thought that natural selection favoured milk drinkers only in more northern regions because of their greater need for vitamin D in their diet. People living in most parts of the world make vitamin D when sunlight hits the skin, but in northern latitudes there isn't enough sunlight to do this for most of the year.

In the collaborative study, the team used a computer simulation model to explore the spread of lactase persistence, dairy farming, other food gathering practices and genes in Europe. The model integrated genetic and archaeological data using newly developed statistical approaches.

"Most adults worldwide do not produce the enzyme lactase and so are unable to digest the milk sugar lactose," says Professor Mark Thomas, UCL Genetics, Evolution and Environment. "However, most Europeans continue to produce lactase throughout their life, a characteristic known as lactase persistence. In Europe, a single genetic change (13,910*T) is strongly associated with lactase persistence and appears to have given people with it a big survival advantage. Since adult consumption of fresh milk was only possible after the domestication of animals, it is likely that lactase persistence co-evolved with the cultural practice of dairying, although it was not known when it first arose in Europe or what factors drove its rapid spread."

Many reasons have been put forward for why being able to drink fresh milk should be such an advantage. For example, milk can compensate for the lack of sunlight and synthesis of vitamin D in skin at more northern latitudes, since vitamin D is required for calcium absorption and milk provides a good dietary source of both nutrients. Milk also provides a calorie- and protein-rich food source, comes in a relatively constant supply compared to the boom-and-bust of seasonal crops, and would have been less contaminated than water supplies.

"Our study simulated the spread of lactase persistence and farming in Europe, and found that lactase persistence appears to have begun around 7,500 years ago between the central Balkans and central Europe, probably among people of the Linearbandkeramik culture. But contrary to popular belief, we also found that a need for dietary vitamin D was not necessary to explain why lactase persistence is common in northern Europe today," Professor Thomas continues.

Evidence from other studies suggest dairying was present in south-eastern Europe soon after the arrival of farming, while milk proteins found in ceramic vessels provide evidence for dairying in (present-day) Romania and Hungary some 7,900-7,450 years ago. Traces of fats also point to dairying at the onset of farming in England some 6,100 years ago. But it is most likely that milk was first fermented to make yoghurt, butter and cheese, and not drunk fresh. The Romans used goat and sheep milk to produce cheese, and cattle as a draught animal. However, Germanic and Celtic people practiced cattle dairying and drank fresh milk in significant amounts. The current distribution of lactase persistence would seem to suggest an origin in Northwest Europe - especially Ireland and Scandanivia - since it is found at its highest frequency there today. However, the latest study suggests otherwise. Dairy farmers carrying this gene variant probably originated in central Europe and underwent more widespread and rapid population growth than non-dairying groups.

The spread of fresh milk drinking from the Balkans across Europe also explains why most European lactase-persistent people carry the same version of the gene; it surfed on a wave of population expansion that followed the rapid co-evolution of milk tolerance and dairy farming. In Africa, there are four known lactase persistence gene variants and probably many more yet to be discovered. Most are likely to be of African origin but the European version is also found there, especially among the Falani people. This diversity is probably the result of an 'imposition' of dairying culture on a pre-existing farming people, rather than the natural spread of dairy farmers.