The Parliamentary Office of Science and Technology last week published 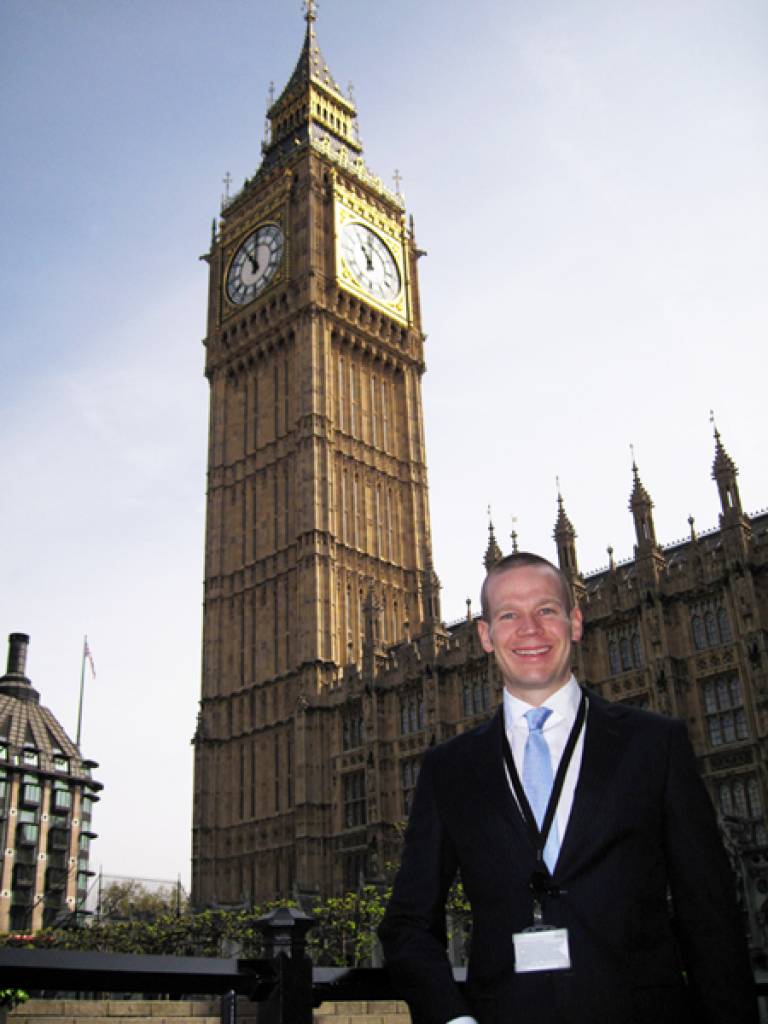 parliament.uk/documents/post/postpn329.pdf" target="_self">a briefing note on personalised medicine written by Kesson Magid, a UCL Biological Anthropology PhD student. Kesson describes how and why he came to work in Whitehall.

"I have recently completed an internship at the Parliamentary Office of Science and Technology (POST), where I prepared a four-page briefing for parliamentarians on personalised medicine - a POSTnote. The idea behind POSTnotes is to present topical scientific issues in a concise, accessible format to the non-specialist politician.

Getting involved in government

"I am investigating the effects of migration on the reproductive hormones of Bangadeshi men for my PhD. This requires engaging with the Bangladeshi community in London on a regular basis, which involves presenting male reproductive health issues in an accessible way. You can find out more about this research on the study webpage.

"I heard about the fellowships at POST through my supervisor, Gillian Bentley, who forwarded me an email about them from the Economic and Social Research Council. I hadn't considered working for parliament before, but thought I'd apply as I'm interested in how science is perceived by the public - and by those who represent the public. It also seemed like a good opportunity to develop writing skills and interview techniques that would be useful for communicating about my research; something that is likely to be part of any academic career.

"I proposed a POSTnote on the topic of racial profiling for drug development. Racially specific labelling and licensing of drugs stirred some controversy in 2005, when the US Food and Drug Administration approved the drug BiDil specifically for use in African Americans with congestive heart failure. Critics accused the company of being motivated by marketing rather than clinical effectiveness.

"The science has moved on considerably since then, which means there is less emphasis on ethnicity as a determinant of underlying genetic differences between patients. But controversy surrounds the 'tailoring' of medicine to individual biological characteristics based on genes, developmental history or immunity. For this reason the topic of the briefing was expanded to include all forms of personalised medicine.

How I drew on my research interests

"I'd become interested in personalised medicine during the Evolutionary Medicine module of the MSc in Human Evolution and Behaviour here at UCL. I hoped that I might write a briefing explaining the current state of the study of human variation, and the complex interactions between genes and environment over a lifespan that determine response to medical treatment. I also realised a briefing on 'human variation' might not be picked up and read by a busy politician, but that the influence of our understanding of human variation on the economics and regulation of future healthcare would be of immediate interest.

"My PhD research concerns hormones, probably one of the most variable measures of human variation. Studying a characteristic influenced by genes, emotional states, childhood environment, nutrition, disease and time of day (to name a few possible factors) has given me a respect for the potential subjectivity of health-related categorisation or measurements. The causes of some of the diseases of old age make more sense when looked at from a perspective that considers the whole of human history.

"Fellows are given a pass that allows us access to most of the parliamentary estate, and it's very easy to get lost in the corridors and staircases of the Palace of Westminster. On my first day at Millbank, I tried out my new pass by holding it up to a keypad and typing in a pin code. A glass cylinder opens up and I step inside. It shuts, and for a moment I'm encased in a tube and feel like I'm going to be sucked up like the canisters of money at banks and Tesco. Fortunately the other side then slides open - and I'm inside.

"Since most of the people working at POST are other PhD students on fellowships, it has a familiar academic atmosphere, but the topics are probably more varied than those found in any single university department. While I was there, one fellow was writing a note on engineering planetary climate through seeding the South Pacific with iron filings, and another was writing on the UK's rising deer populations. New ideas pop up quickly; everyone seems to share an interest in what's going on - or is about to happen - in the realm of science, as well as politics.

"The pace is also similar to academia; less about the day-to-day politics and more of the long-term research-based agenda of policy-related departments in a university. Everyone has three months to research their topic, but it takes some time to feel confident enough to start tracking down experts in the field.

"The people I talked to ranged from leading academics in major research initiatives and pharmaceutical research and development strategists, to representatives of regulatory bodies within UK and European government. It seems to me that much of the real information gathering and negotiation at parliament occurs over lunch, and in the numerous cafes and bars on the estate. Walking through the café, there is almost always a discussion about 'stakeholders' or 'frameworks' among the clerks and advisers at the tables.
"I'm fortunate that the writing of my note coincided with a House of Lords Science and Technology Subcommittee inquiry into Genomic Medicine. Many of the experts who came in to give evidence were the same people I needed to hear from in researching my briefing. The committee meetings were open to the public, but I probably would never have considered sitting in on one before the fellowship.

"I must admit I'd not had a very clear idea of the function of the House of Lords when I started, but it was enlightening to sit in on meetings of experts examined over a very broad topic over a period of months. If there's ever another inquiry of direct relevance to my field of research, I would definitely look over the transcripts or sit in on a meeting again.

"Researching the POSTnote gave me a crash course in how the various ministries and departments of government interact with advisory bodies and parliament. It became clear how small the Westminster village actually is, with many of the advisers and specialists having moved around the different organisations that influence science policy in the UK. A few were even POST alumni. The experience also gave me a crash course in acronyms!

"Some days reminded me of my fieldwork. Many of the rules, traditions and institutions of parliament would strike almost any visitor as foreign. As I was born and grew up in the USA, there was another layer of cultural differences. Social hierarchies, alliance formation, trade-offs between individual motivations and group cohesion are all major topics in anthropology, and where better to watch them all in action than among the tribes of Westminster?"

Influence across government
At UCL we take pains to ensure that our outstanding, wide-ranging research informs and influences the laws that govern us in London and further afield. Our staff and postgraduates provide local and central government with specialist research and consultancy on vast range of issue. Find out more at our UCL and London website.

UCL Anthropology
The breadth of anthropology at UCL distinguishes our programme from those offered by most other British universities. UCL Anthropology looks at the biological, cultural, social and material culture aspects of human beings as well as their evolution. The department covers the entire human story; from its origins to the present day.