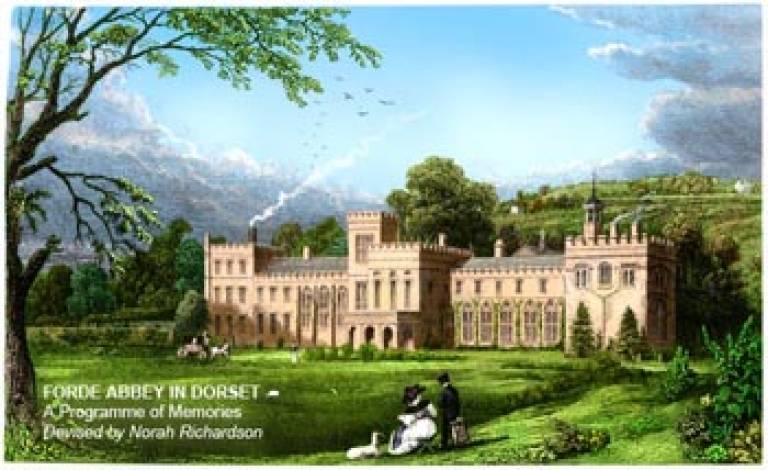 The UCL Bentham Project has released a new audio recording of a programme first broadcast on BBC Radio in 1937. The programme used Jeremy Bentham's time at Forde Abbey in Dorset (1814-18) through which to explore the history of the abbey from its foundation. The author, Norah Richardson was a historian, who lived near Forde Abbey at Red House, Wilton, and Salisbury.

Whilst searching through the Muniment Room at Forde Abbey, a member of the Abbey staff found the script of a radio programme entitled 'Forde Abbey in Dorset. A programme of memories'. The programme begins with Samuel Romilly recommending to Bentham that he spend some of the money he received in compensation from the government for the failure to build a panopticon prison, to rent a house in the country, and Romilly conveniently finds an advert in The Times announcing that Forde Abbey is to let.

With Bentham in residence, the history of the Abbey unfolds through the gardener's stories told in response to the questions of Bentham and James Mill's two eldest children: John Stuart and Wilhelmina Mill.

Working from the 1937 script, members of the Bentham Project endeavoured to make the recording an accurate representation of the original broadcast.

Catherine Fuller, Research Fellow at the Bentham Project, commented: "The Bentham Project tries to collect Bentham memorabilia wherever possible, and the script of the radio play seemed a worthy edition to our collection. We decided to make a recording of the play because we thought the playwright skilfully used the selection of sources available in 1937 on the work Bentham undertook, and his domestic arrangements, while staying at the Abbey. The piece is interesting as it weaves the story of Bentham's stay with the history of the Abbey itself, and provides rather surprising evidence of what people would expect to hear on the radio on a Sunday evening in 1937. A copy of the script and the recording will be available in the Bentham Collection at the Special Collections Library at UCL."

For more information on the story and to listen to the programme, please follow the links at the top of the page.

The UCL Bentham Project aims to produce a new scholarly edition of the works and correspondence of Jeremy Bentham (1748-1832), the influential jurist, philosopher, social scientist, and spiritual founder of UCL whom A.J.P. Taylor described as "the most formidable reasoner who ever applied his gifts to the practical questions of administration and politics".

The Bentham Committee supervisor the Project. The committee was established in 1959 as a committee of the Council of UCL. The present chairman is Professor Jo Wolff (UCL Philosophy).

Since 1968, twenty-six volumes of the new Collected Works have been published under the auspices of the Bentham Committee, eight of them by the Athlone Press and the last eighteen by the by Athlone Press and Oxford University Press.