Read our blog from the LHC switch-on

Today scientists around the world hold their breath as the switch is thrown on the Large Hadron Collider (LHC), the biggest experiment in physics for a generation. 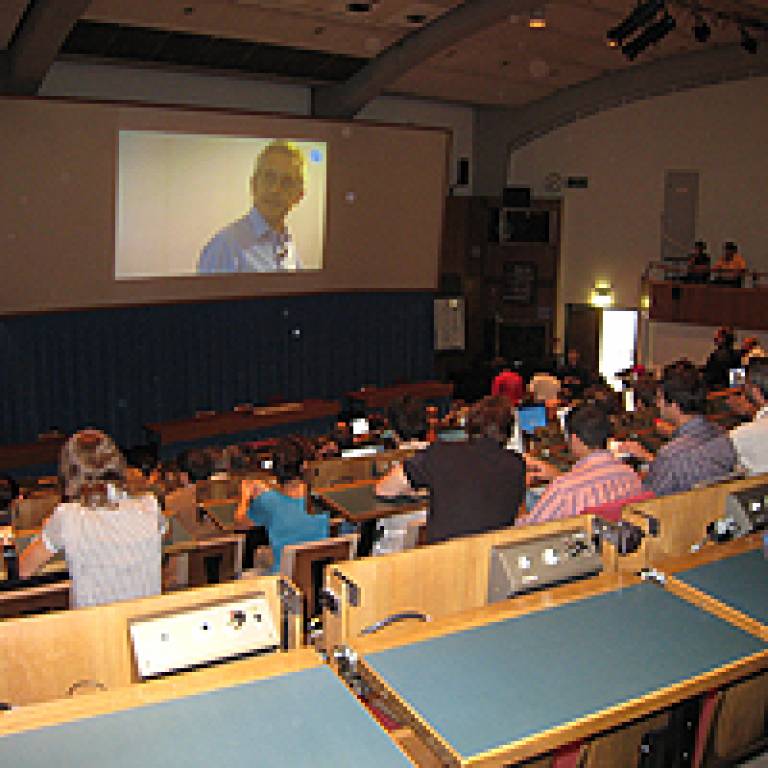 Right in the fore of the experiment, held in the deep underground CERN laboratory near Geneva, are researchers from UCL's High Energy Physics Group.

They have been involved throughout the development of the LHC project, as well as playing a role in the engineering of the ATLAS particle detector, with Professor John Butterworth, UCL Physics and Astronomy, in overall charge of ATLAS.

Blogging from CERN itself this morning is Catrin Bernius, a UCL PhD student with the High Energy Physics programme, involved with the Higgs particle search and trigger.

They've just managed to get the anti-clockwise beam around, so now they are in principle able to send both beams around. It wasn't really expected to get both beams around today, and certainly not in this short time.

Things have gone really well today. They managed to get one beam around completely, and managed to see events in the ATLAS detector. That is already a great success! What I heard is that they will try to circulate the second beam (anti-clockwise) later on.
Over the next few weeks, the LHC operators will gain experience with the new machine, the machine's acceleration systems will be brought into play and the beams will be brought into collision to allow the research programme to begin.

ATLAS has managed to take data - they saw a shower of Muons (an elementary particle with negative electric charge) and were able to reconstruct it, which shows that the detector works - and that the detector is synchronized with the machine.

The beam went around the full circle! Now they are attempting to send the beam around twice in one go.

Now the beam just reached the ATLAS experiment, what they will do now is to check the beam quality before the beam goes through ATLAS to complete the full circle (the last sector). This is all going really well and faster than anyone expected!

So now they managed to send the beam around 6 out of 8 sectors, so only two more sectors left until a full circle! And no black holes ;-)

Things are going well, the beam is more than half way round, almost three quarter of the ring now. Now they are correcting the beam and collimating it.

People are relieved, the beam went round half the accelerator for the first time which is great. They tested sector by sector in the previous days but now they managed to send it round half way.This whole process will take a couple of hours to get the beam the whole way round.
So you can say that the atmosphere is still tense but they achieved already a lot but there is still more to do.

They are starting now! First beam was seen on the monitor.

0832 (BST)
They will inject the first beam into the first sector in the next few min...

0823 (BST)
Lynn Evans (LHC Project leader) is now speaking, they will first inject beam1 (the clockwise circulating beam) and always stop before the experiments (guess not to damage them). They will do that with all sectors and then attempt to circulate it around completely. Now the Robert Aymar (Director of the International Thermonuclear Experimental) also gave his speech now (in French though).

I am now in the main auditorium, it is very full, everyone is really excited and there was just a countdown for the first beam.Soon the speech of the director general will follow I assume and then the first attempt to send a beam around.