This week's set of UCL Views show highlights of 'Curiosities of Literature', the new book by John Sutherland (Emeritus Professor of UCL English) - just click on the main homepage image to see more. 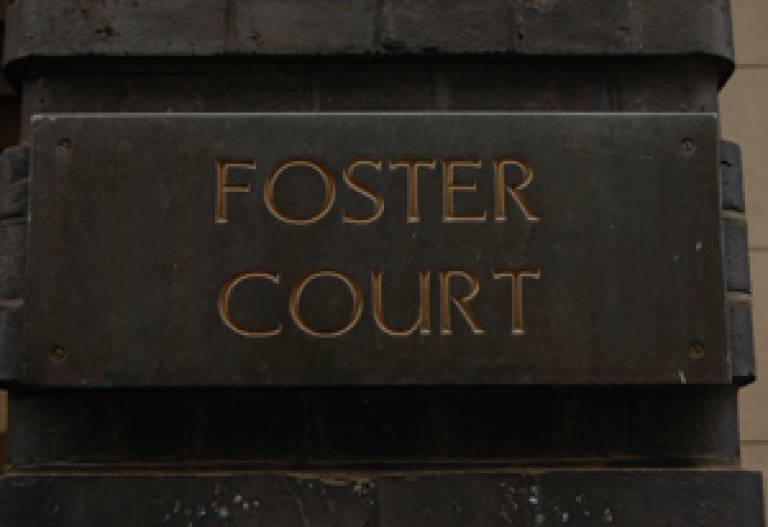 To give an additional UCL touch to these curiosities, you can read Professor Sutherland's specially compiled 'Foster Court Curiosities' below...


"I like to make my way to the English Department (as I have done, on and off, for - well, let's say many years) via UCL's majestic front portico. It may be the Godless Place in Gower Street, but, by God it's the architectural pride of Gower Street. Then it's down the steps, past what must now be the largest men's restroom in (aptly named) WC1 (37 urinals and 22 stalls - is this one for Guinness?), over the promising new paved terrace, under "physiology" (what, exactly, does "Hazchem" mean?), do a bit of toreador footwork with the charging white vans ("5 mph? Get stuffed you over-educated git"). And there it is, Foster Court. My academic haven.

Many people know (titteringly) that Foster Court (named after an English-Department loving Provost - praise be to his memory) used to be a mattress warehouse for Maple's Department Store. Few know that it is, in point of fact, a perfect replica of a Maples mattress warehouse. A clone.

One night, some half century ago, Egyptologists (then located in some secret chamber in the basement) left a clay-drying oven on all night (pots were shipped damp, to prevent breakage). It overheated and burned FC down. Insurance only covered an exact replacement. So, there you are. Foster Court Mark Two.

The building's interior is currently being refurbished - rather handsomely, everyone agrees (although I, for one, will miss that austerity-era linoleum). And I hope it means that the oldest department of English Literature in the world (there is some puny counter claim from Edinburgh) will, finally, get some better coverage in the English Literature which it so nobly promulgates.

Novelists have frequently used the department, and FC, as a setting - but always spitefully. David Lodge, for example, represents the place where he got the education which has made him the leading man of letters that he is, as a comic shambles in 'The British Museum is Falling Down'. I forgive David, for his wit, but the depiction hurts.

Antonia Byatt who graced the department for many years, as one of its most distinguished scholars and teachers, depicts FC, at length and in great detail, as "the Ash Factory" - a place of drearily pointless research. 'Possession' won the Booker Prize, and richly deserved to do so. But "Ash Factory" niggles.

In a later Booker-winning novel, 'The Line of Beauty', Alan Hollinghurst (a visiting lecturer in the 1980s) has a hero doing research in the mattress warehouse, in a department all of whose members are chronic alcoholics. That goes beyond hurt into pain.

Foster Court awaits its Brideshead novel. Despite the 2008 makeover it may, I fear, be a long wait. But the new paint and carpets may help."