Rwanda: discovering a forgotten past 
PhD students Jane Humphris and John Giblin of the UCL Institute of Archaeology describe how their research is helping to dispel divisive colonial myths about Rwanda's history that led to ethnic conflict in the 1990s.

In 1994 the genocide in Rwanda killed over 800,000 people. Although several factors contributed to the hostilities, many of them can be attributed to propaganda circulated during colonial times, aimed at causing divides and antipathies among the people, and thus providing a means of control and exploitation by colonial authorities.

Today, our ongoing research hopes to deconstruct that presentation and highlight more positive perspectives concerning Rwanda's past by developing narratives that focus on interaction and shared histories based on archaeological evidence. This initiative is especially important because pre-colonial history teaching in Rwandan secondary schools was halted in 1995 due to the negative imagery portrayed by the existing curriculum. However, it is believed reconciliation in a post-genocide climate is unlikely without continued discussion of the contested past.

Over 12 months of archaeological survey and excavation has successfully identified more than 100 new sites, 20 of which have now been excavated producing a range of significant remains. Jane's work is focused specifically on the development and use of iron metallurgy in Rwanda over the past 2,000 years, while John's investigates subsistence economy and material culture variation and continuity over the same period.

The research was run as a collaborative effort with students from UCL, Oxford and Newcastle Universities, and the British Institute in Eastern Africa, teaming up with Rwandan students and staff from the National Museum and National University to form a multidisciplinary team.

To date, Jane's excavations have found a range of early to late iron-working remains from southern Rwanda, with a particular concentration associated with the Nyginya Kingdom, the progenitor of modern Rwanda. Her findings provide a window into a previously neglected but highly successful facet of one of Great Lakes Africa's most important pre-colonial states that thrived on the potential of iron for increased agricultural production and military expansion. This research now focuses on understanding how the artisans developed their industries to maximise production and meet the huge demands placed on them by the kingdom.

The archaeometallurgic results complement John's research that focuses on another aspect of life during this period: subsistence. Through intensive sampling during excavation, his research has recovered food remains often thought not to preserve well in this region of the world. The initial results of sample analyses suggest that over the past 2,500 years, individuals were not subsisting on a diet solely based on pastoralism, hunting or farming, but were either practising mixed economies or relying on a variety of markets in some circumstances.  This directly contradicts at least one element of the racial propaganda that led ethnic Hutu, Tutsi and Twa to such violent conflict in the late 20th century.

Individually significant features were also discovered alongside these more thematic finds. These include the remains of one of the earliest burials in Rwanda - approximately 500AD - with a wealth of grave goods including whole pots, iron bracelets and necklets. Importantly, it also contained a cowrie shell, which only occurs naturally at the Indian Ocean coast, providing evidence of very early long- distance trade in Rwanda, an activity previously not thought to have taken place for at least another 500 years.

However, the results of this research in a solely archaeological context are not as important as the potential impact they can have with the Rwandan public. With the information generated by this research it will be possible to construct historical narratives that discuss past activities successfully achieved in this land by the antecedents of the current population. For example, many people in the region believe that Europeans brought science and technology, including metal, to Africa. This research cannot only continue to disprove this now-outdated myth, it can demonstrate the often elaborate and ever developing state of this indigenous technology in Rwanda whilst also discussing the successes of the kingdom that included Hutu, Tutsi and Twa. 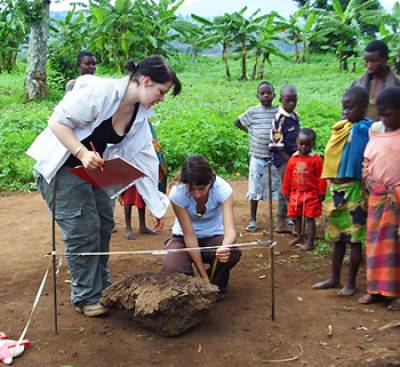 Whilst this research is ongoing, it has successfully produced two short documentary films about different aspects of the research. One, produced by UK film-makers Banyak Productions, funded by a Commonwealth grant, discusses the colonial construction of history in Rwanda and the potential of new archaeological research. This film is now on show in the National Museum of Rwanda and has recently toured the country as part of the Rwanda Film Festival. The second film followed a group of Rwandans who claimed to remember how to make iron using traditional techniques, now not practised regularly. Over two weeks, every aspect of their preparations were recorded culminating in a highly successful smelt watched by hundreds of excited onlookers from the local villages. This account is now being edited for the national museum.

The films are just one way in which the research has reached out to local people within Rwanda to try to engage them in different aspects of their pasts. Whilst in the field, surveying or excavating, time was regularly taken to organise informal presentations, where archaeological artefacts were presented to eager audiences and the aims of research and the basics of archaeology were outlined. This was an extremely rewarding element of the work for all concerned. Local people gained a greater understanding of their immediate environments, and they were able to take us to similar finds they had encountered and further enhance our results.

If successful in the eyes of the Rwandan educational authorities, it is hoped that the results of this research and its approach to the past will be incorporated into the school system, helping to generate the production of new teaching resources and continued pride in this ever-changing and ever-developing nation.

This article was originally published in Past Horizons, the Online Journal of Volunteer Archaeology and Training. Watch the Banyak Productions film 'Piecing Together Rwanda's Past', in the 'Research' section on UCL's site on iTunes U.