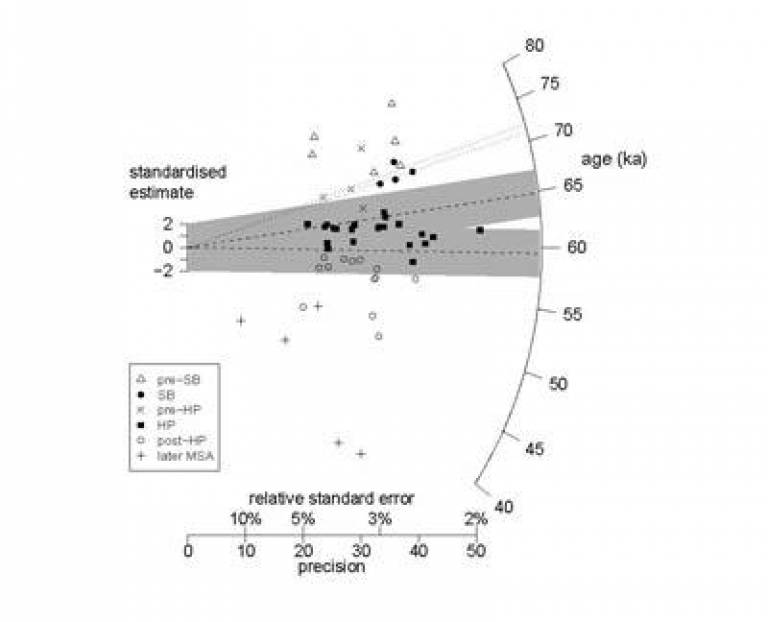 Dr Rex Galbraith (UCL Statistical Science) is a co-author of an international study published in 'Science' on 31 October, which sheds new light on some long-standing questions in African archaeology - the timing of finely crafted stone tools in southern Africa during the Middle Stone Age.

The study was led by Dr Zenobia Jacobs and Professor Richard 'Bert' Roberts in the School of Earth and Environmental Sciences, University of Wollongong, Australia, and included scientists from South Africa, Germany, the UK and Australia.

Two industries, known as Still Bay and Howeison's Poort, emerged between 80,000 and 60,000 years ago and stand out for being particularly sophisticated. The former is remarkable for its finely shaped stone tools that were probably parts of spearheads, and the latter for tools that were hafted to make composite weapons.

The study took sequences of samples from nine archaeological sites spread across southern Africa, each sample being associated with a period before, during or after the Still Bay and Howeison's Poort industries.

Grains of sand from each sample were analysed using state-of-the-art optically stimulated luminescence (OSL) dating by Dr Jacobs in one of the largest ever studies of this kind. Using data synthesis and statistical modeling. Dr Galbraith was able to pinpoint the timings and lengths of these periods.

The synthesised data are presented in a "radial plot" (see image).

Following these, there was a period of about 30,000 years of relatively crude stone age technology. The waxing and waning of these industries may have implications for population changes or demographic events within and out of Africa.
To find out more about UCL Statistical Science, and to see the journal 'Science' use the links at the top of the article.