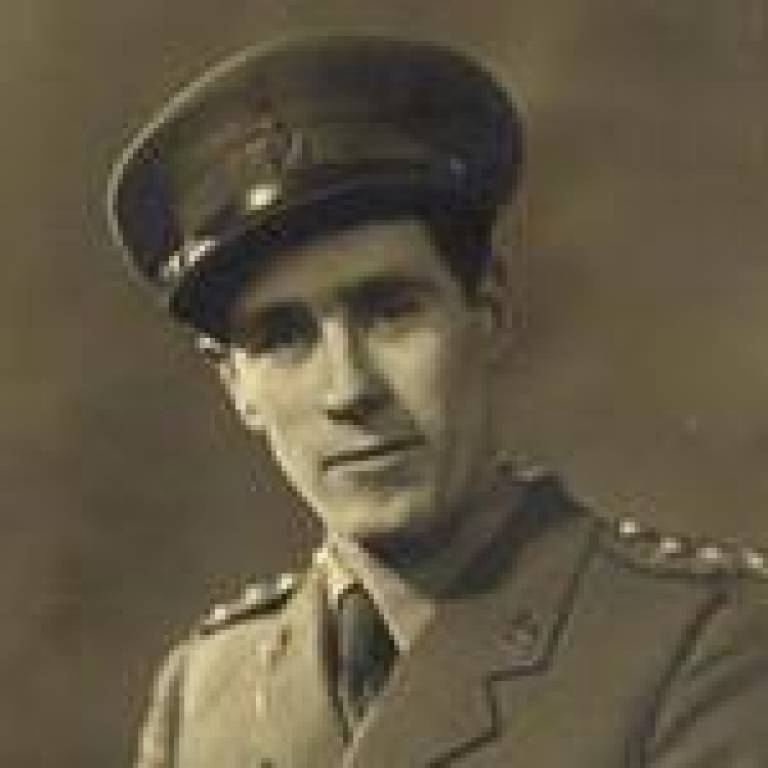 A UCL German alumnus, Captain Jerry Roberts, was a founding member of the 'Testery' at Bletchley Park and a senior member of the élite team assigned to the regular breaking of messages enciphered on the Lorenz SZ40/42 machines, new 12-wheel machines designed especially to encrypt communications between German Army H.Q. in Berlin and the top generals in the field on all fronts, including a number signed by Hitler himself. Nicknamed 'Tunny', it was a much more complex machine than the better-known, and normally 3-wheeled, Enigma.

Capt. Roberts, who studied German at UCL from 1939 to 1941, was assigned to the project at Bletchley's Testery (headed by Major Tester) immediately after completing his degree, and it was partly his expertise in the German language which made him so valuable a code-breaker. He stayed at Bletchley until the end of the war, and from 1945 to 1947 worked for the War Crimes Investigation Unit, using his fluent German and French to interview perpetrators, witnesses and victims of war crimes in both Germany and France, taking legal statements from them for use in war crimes prosecutions. He is the only surviving member of the Testery in the UK today.

Bletchley Park was the UK's code-breaking establishment during the Second World War, and its breaking of the Enigma and Tunny codes, among other activities, is widely held to be one of the most significant factors contributing to Allied victory - General Eisenhower even said that "the decrypts from Bletchley Park shortened the War by at least two years". While he was there, Capt. Roberts had contact with several notable figures, including William Tutte (who broke the 'Fish' code), Alan Turing (who broke the 'Enigma' code and is one of the fathers of modern computer science), and Tommy Flowers, who was also a University of London alumnus, and designed and built the 'Colossus' computer - the world's first programmable electronic computer, and effectively the forerunner of every computer, laptop, and iPod around today - which was used to read the encrypted Tunny messages.

The Tunny project was only declassified seven years ago, and a UCL German department event on 13 January 2009 will be one of the first opportunities for Capt. Roberts to speak about his experiences at Bletchley and after. Professor Susanne Kord, Head of UCL German, believes that the event "presents UCL students, staff and guests with the unique opportunity to listen to a truly historical figure speak about events which influenced twentieth-century German and English history to a significant degree".

To find out more, please click on one of the links at the top of the page.

For further information on the Tunny code and on Colossus, please read the original 1945 Tunny Report, or click here.