'Politics of Culture in Liberal Italy' 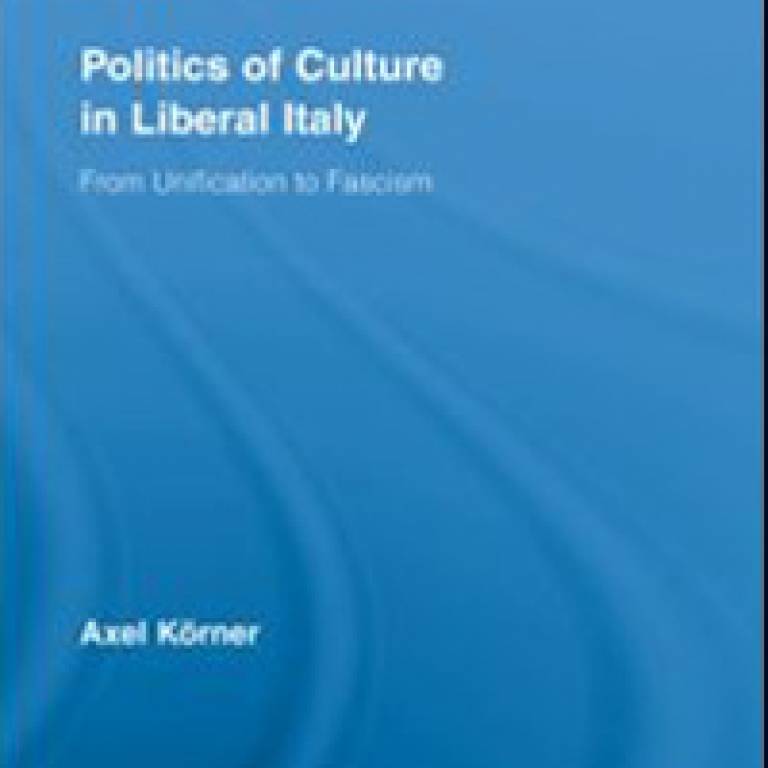 
Dr Axel Korner, reader in Modern European History at UCL's Department of History, analyses Italians' changing relationship with their new nation state and the monarchy from the 1850s to the 1920s.

With chapters on theatre and opera, architecture and urban planning, the medieval revival and the rediscovery of Italy's Etruscan and Roman past, Korner also assesses the conflicts between the peninsula's ancient elites and the rising middle class, and the emergence of new belief systems and of scientific responses to the experience of modernity.

Analysing Italy from its Unification as a nation-state at the end of the 1850s to the crisis of the liberal system and its collapse under Fascism in the early 1920s, Korner challenges stereotypes of a nation obsessed with its own traditions, absorbed in its music, culinary culture and organised crime, and of a perceived cultural pessimism, malaise and decline post-Unification.

By contrast, Korner sees a profoundly cosmopolitan country whose political, intellectual and cultural transformation in the 19th century is closely linked to the European experience of modernity, reflected in the central role of music and opera. Far from being the antechamber of Fascism, as it has been sometimes dubbed, he sees Italy's opening towards modernism as symbolising an attempt to fund solutions to the crisis of its liberal system and to create a positive future outlook.

Central to his thesis is an extensive case study of Bologna, the first Italian city where the Fascists ended democratic rule in 1920, two years before their march on Rome. Through examination of the contrast between the relative socio-economic backwardness of the surrounding Papal Legation region and Bologna's rich cultural life, Korner explores the role of culture in both strengthening continuity and inspiring change in the decades around the turn of the 20th century.

Bologna's attempt to improve its image after the fall of the Papal regime led to a progressive cultural scene just a few years after Unification. Poet and politican Giosue Carducci, writers Arrigo Boito and Enrico Panzacchi and Moderate prime ministe Marco Minghetti all had links to the city, which premiered major musical works such as Guonod's 'Faust' and became synonymous with Wagner, becoming the first Italian city to stage his musica del futoro, 'Lohengrin'. While much of Italy celebrated the centenary of Verdi's birth in 1913, Bologna made a point of championing more modernist outlook of Wagner, who was born in the same year.

Korner's book ultimately offers a new perspective at the origins of Fascism, suggesting that the Fascists chose Bologna as their first stronghold precisely to undermine and destroy the democratic institutions in places where culture had political power.

For more on 'Politics of Culture in Liberal Italy', use the link at the top of this article.