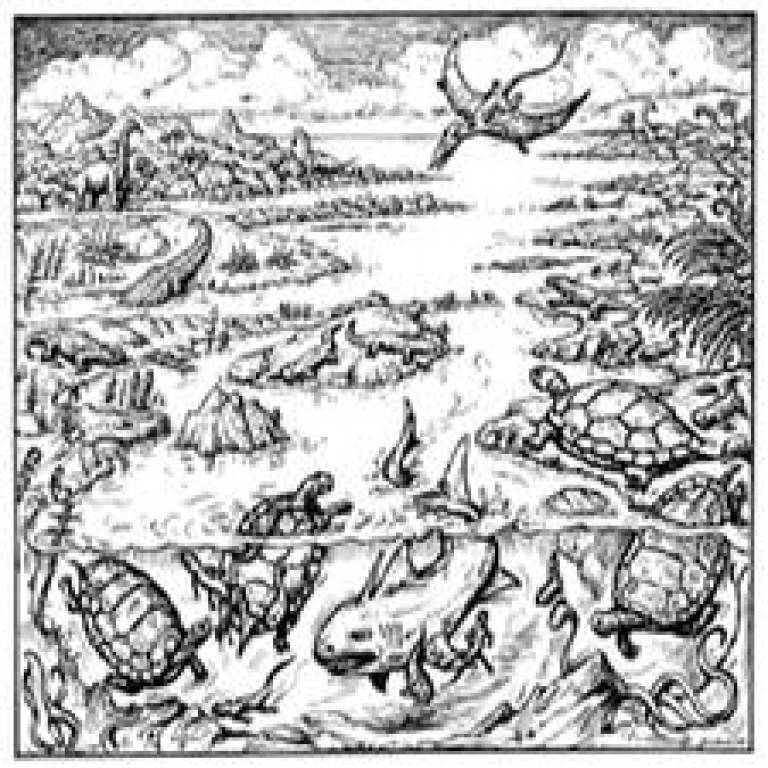 Around 164 million years ago the earliest aquatic turtles lived in lakes and lagoons on the Isle of Skye, Scotland, according to research published today.

Recent scientific fieldwork led by researchers from UCL and the Natural History Museum on Skye, an island off the north-western coast of Scotland, discovered a block of rock containing fossils that have been recognised as a new species of primitive turtle Eileanchelys waldmani. Months of work at the Natural History Museum freed these skeletons from the rock, revealing four well-preserved turtles and the remnants of at least two others. These remains, and a beautiful skull found nearby, represent the most complete Middle Jurassic turtle described to date, offering substantial new insights into the early evolution of turtles and how they diversified into the varied forms we see today.

Investigation into the palaeoecology of the area - the relationship between these ancient turtles and their environment - shows that these turtles lived in conditions that were very different to modern-day Skye. The turtles were found alongside fossils of other aquatic species such as sharks and salamanders that would have lived in a landscape made up of low-salinity lagoons and freshwater floodplain lakes and pools.

The research team was led by Professor Susan Evans from UCL Cell and Developmental Biology (CDB) and Dr Paul Barrett (of the Natural History Museum and an honorary member of the CDB). The team included Jérémy Anquetin, PhD student in Vertebrate Palaeontology in Professor Evans's lab and the Department of Palaeontology of the Natural History Museum. Anquetin, who is researching the development and classification of early turtles, led the fossils' description - and believes these findings to be extremely significant to our understanding of primitive turtles:

"Although the majority of modern turtles are aquatic forms, it has been convincingly demonstrated that the most primitive turtles from the Triassic period, around 210 million years ago, were exclusively terrestrial. Until the discovery of Eileanchelys we thought that adaptation to aquatic habitat might have appeared among primitive turtles, but we had no fossil evidence of that. Now we know for sure that there were aquatic turtles in the Jurassic period, around 164 million years ago. This discovery also demonstrates that turtles were more ecologically diverse early in their history than had been suspected before."

The full report is published today in the Royal Society's 'Proceedings B', and Professor Evans describes the project, and future plans, in more detail in 'The Isle of Sky turtle fossils discovery', which you can read here.