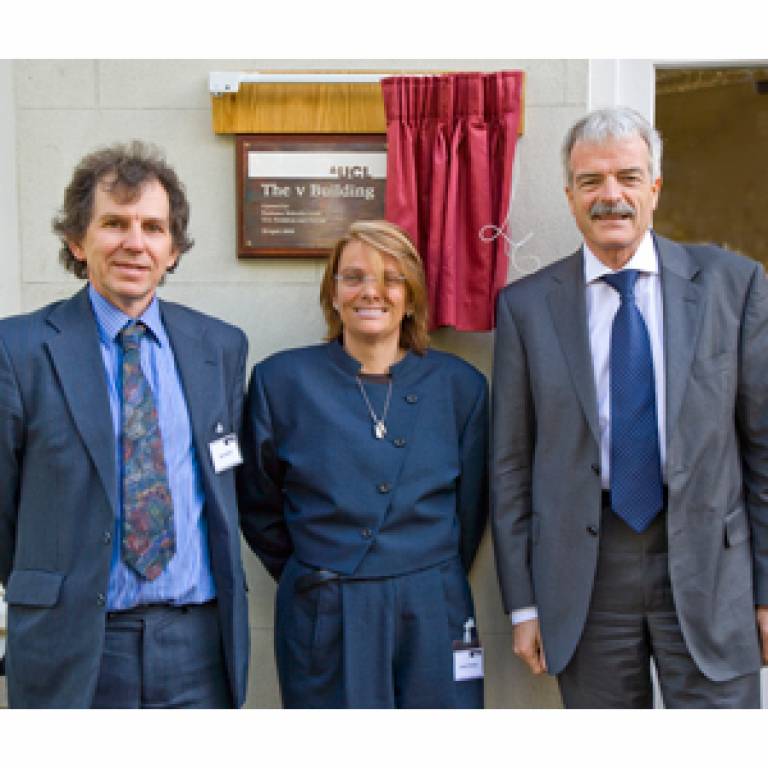 The underlying science of MSSL and the HEP group is fundamentally connected. It is now appreciated that the evolution of stars and galaxies - the Universe as we know it - was determined by the conditions within the primordial Universe when it was only a micro-second old. These conditions are the province of particle physics and clues to their nature can be found both in particle physics experimentation and observational cosmology. Just prior to the opening, Professor Jenny Thomas (UCL Physics and Astronomy), gave an informative and entertaining presentation which described the Universe from its birth to its present age.

A particularly interesting synergy lies in the study of the neutrino, given the Greek symbol 'ν'- hence the name of the building. Unimaginably large numbers of neutrinos were created in the early Universe and are emitted by stars such as our sun and in supernova explosions. Why matter exists at all has been a worry to scientist for many years. A 'natural' view would anticipate an equal number of particles and anti-particles which, in the fullness of time, should annihilate each other - yet we see a Universe full of matter and almost no antimatter. The neutrino may hold the key to this dilemma and why all the anti-matter disappeared within a few minutes of its creation in the 'Big Bang'.

Moreover, the neutrino has proved to be far more interesting than had been originally thought and its characteristics are now of intense interest. The new laboratory has been designed to build equipment that will study these important fundamental particles properties - such as its rest mass.

Professor Grant unveiled a plaque at the entrance to the new building and offered warm words of encouragement to those present. In particular he congratulated Professor Thomas for bringing forward the initiative and for Professor Keith Mason and Professor Ian Halliday for their inspired support.

Guests at the opening included local dignitaries and prominent members of the research community including: the present Chief Executive of EPSRC (and former UCL Vice-Provost for Research), Professor David Delpy; a former Chief Executive of PPARC, Professor Ian Halliday; the current Chief Operating Officer for STFC, Professor Richard Wade; UCL Vice-Provost for Research, Professor David Price; Dean of the UCL Maths and Physical Sciences Faculty, Professor Richard Catlow; MAPS Vice-Dean for Research, Professor Jonathan Butterworth, the local MP and Majors of Waverley and Guildford. They were joined by many members of the UK particle physics and space science community.

After a tour of MSSL site including the ν-building, Professor Alan Smith (Director, UCL Mullard Space Science Laboratory) and Professor Thomas gave presentations explaining their vision for future continued cooperation within the context of the UCL 'Origins' initiative.

The top floor of the ν-building has become the home for MSSL's spacecraft operations, including the XMM, and Swift Observatories and Cluster constellation of space plasma physics satellites.

The new laboratory's first major project will be the construction of detectors for the SuperNEMO experiment. SuperNEMO will search for a very rare process, neutrinoless double beta decay. It is expected that such observations will confirm the long held view that neutrinos are their own antiparticle and will allow physicists to determine the rest-mass of the neutrino.