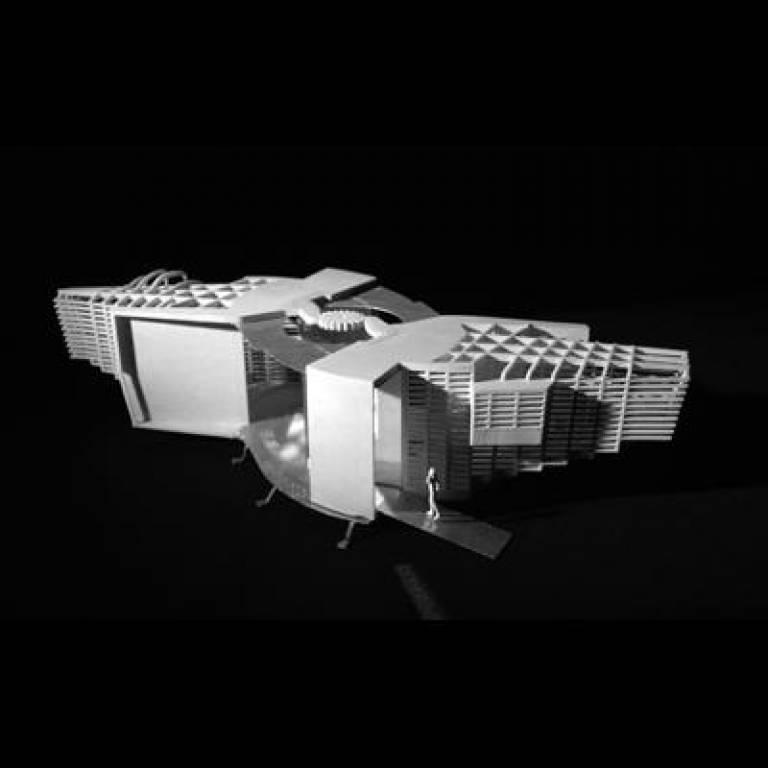 
Experimental performance spaces designed by students from Diploma Unit 23 at the UCL Bartlett School of Architecture went on display at the Central School of Speech and Drama in Swiss Cottage last month. The work can be seen again at the UCL Bartlett's annual Summer Show held at the galleries of the UCL Slade School of Fine Art from 20-27 June, where work from the school's 22 other design units goes on display. Over 5,000 guests are expected at the opening night, which in recent years has grown into one of UCL's most spectacular summer events.

Bob Sheil and Emmanuel Vercruysse, who are leading the project at the UCL Bartlett, were approached by Jessica Bowles, Principal Lecturer and Course Leader of Theatre Practice at CSSD last summer. Jessica and Sophie Nield were organising an international conference on the theme of 'Theatre Materials', where questions on sustainability in theatre design were tabled. Initially, the brief for U23 was to investigate and design a temporary space for the conference to house experimental performance, prototype ideas for sustainability and host conference debates. In consultation with structural engineer Ron Packman, Sheil and Vercruysse offered the brief to their fourth year students who responded quickly with the typical imagination and wit for which Bartlett students are renowned. On this basis the brief evolved into a more ambitious proposal for a temporary mobile venue to 'incubate' new performance and the short timescale was extended.

This leap in scale and ambition was not only made possible by the inventiveness of early proposals, but in large part by the early support of CSSD's Centre for Excellence in Training for Theatre (CETT). Led by Sophie Nield, CETT works to provide a national resource for vocational performing arts training and learning, a focus for theatre research and scholarship, and a site for collaboration, nationally and internationally, between industry, Higher Education and specialist training providers. With CETT's backing the proposal has gained credibility and a platform to raise further funding to design and later build a prototype. Following the initial outing in Swiss Cottage further support has become available through theatre consultant Petrus Bertschinger and the Association of British Theatre Technicians.

Sheil explains: "The project is being approached from the ideal to the real. Of equal importance to the question of sustainability is an ambitious approach to spatial innovation, one that provokes and incubates experimental performance". Students have developed their ideas largely through models, both hand-made and digital, which will be on display at the show. On the latter, students have been able to profit from the Bartlett's recent investment in two 3D printers, a process that builds a physical model in gypsum from a digital drawing file. They can also look forward to accessing further digital manufacturing equipment next year following the Bartlett's recent £0.64m award from UCL' Central Infrastructure Fund, led by Sheil. "By next October we expect to announce the opening of a new Digital Fabrication Centre for UCL, based at the Bartlett and available across campus. It will be fully staffed and equipped with state of the art modelling and fabrication equipment and will also offer a high quality service to London's leading architectural design practices, such as Fosters, KPF, Make, and Thomas Heatherwick Studios".