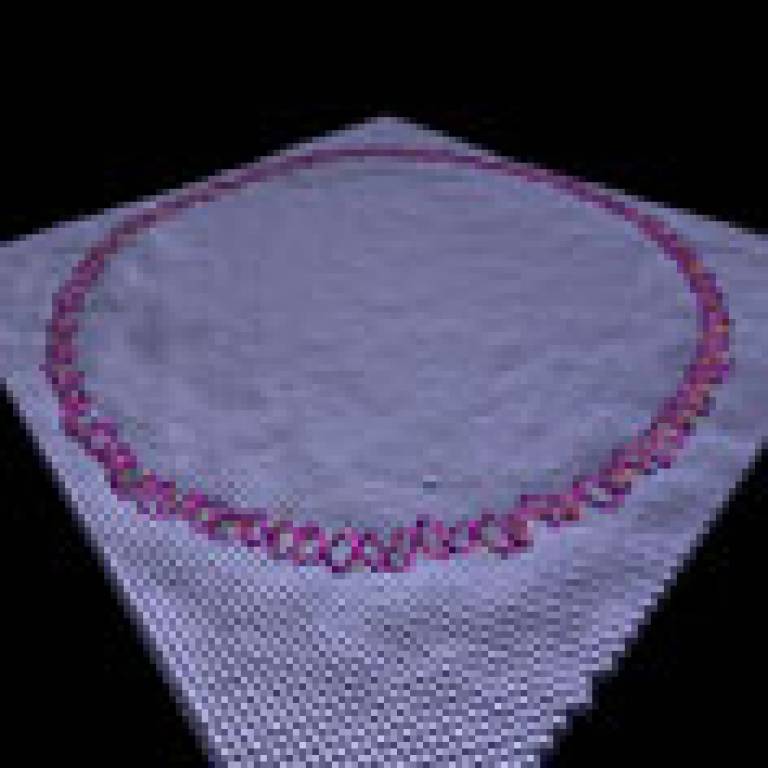 Two UCL scientists are among the winners in the Wellcome Image Awards 2008. The images made by Mary-Ann Thyveetil (UCL Chemistry) and Shao Jin Ong (UCL Institute of Child Health) will join 20 other winning pictures in an exhibition at the Wellcome Collection. The finalists, which are made up of scientists from throughout the UK, were selected by an expert judging panel which included Dr Alice Roberts and Vivienne Parry.

Mary-Ann Thyveetil's image is from a computer simulation showing a circular piece of DNA on a mineral sheet. "It is being studied using molecular dynamics simulations to see whether the sheets can protect the DNA against extreme conditions such as those found in deep ocean hydrothermal vents. If the sheets are found to do this, it would lend support to the idea that certain mineral sheets could be an ideal protective scaffold to help in the creation of biological molecules, and hence may have been important in the origin of life in and around these deep ocean vents," she explains.

An image of meningitis-causing bacteria secured Shao Jin Ong his place in the exhibition: "The tiny yellow dots are Neisseria meningitidis bacteria living inside human airway cells. Although they live in the noses and throats of many people without leading to disease, if they break through into the bloodstream they can cause potentially fatal meningitis and septicaemia."

To find out more about the exhibition, which will be on display until Summer 2008, use the link at the top of this article.