UCL in the News: Mind-blowing inventions from a mysterious architecture lab 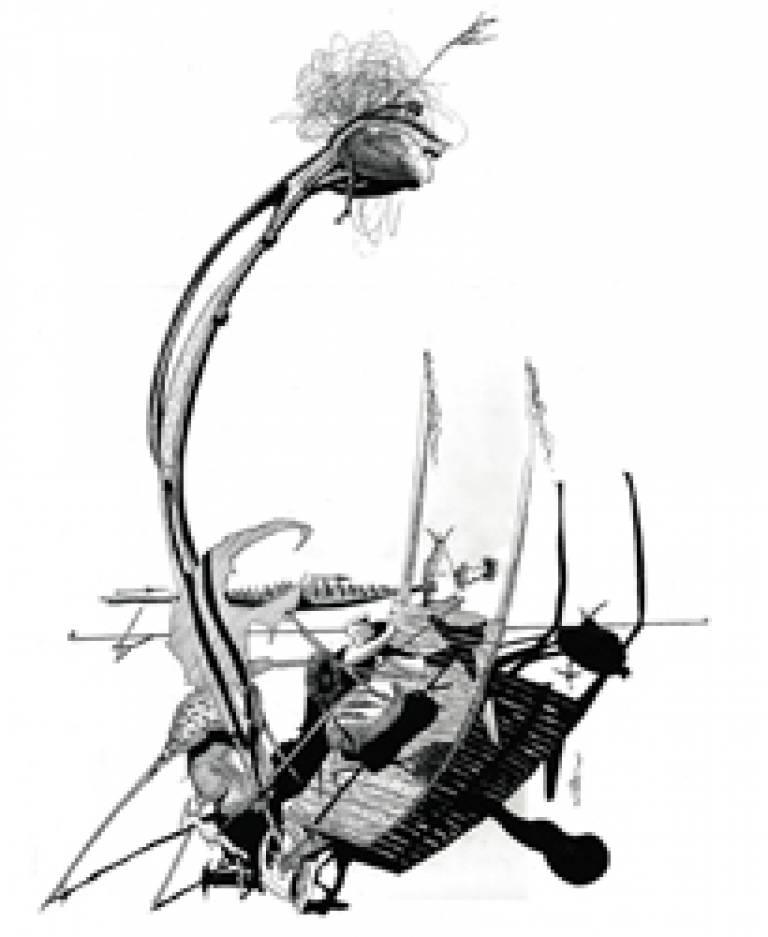 "But they don't know how fast. And they don't know how much is at stake." Spiller, 46, is the director of AVATAR, the Advanced Virtual and Technological Architectural Lab at UCL Bartlett School of Architecture. More like an extraordinary megalomaniac art collective than a student seminar, AVATAR doesn't design buildings - it designs futures.

What is the use, for instance, of James Curtis's plan to make robots act out Greek myths in the window of an Islington butchers shop, and what has it got to do with architecture? No one quite knows yet, and that's precisely the point. A physicist may spend his life on the hunt for some sub-atomic particle without the slightest concern for its practical applications, without knowing that years after his death it might fuel our jet-packs. In the same way, AVATAR invents things that seem useless now but that one day may be as prosaic as light switches. "Students that are graduating now will probably be practising for 50 years," says Spiller. "And yet the way that we live and communicate now would have been unimaginable 50 years ago. So how are they to adapt?"

Some of the changes we can already see coming. A generation who have grown up with Google and MySpace will want to interrogate and personalise their physical environments as effortlessly as their virtual ones.

"We are all cyborgs now," says Spiller. "Whether it's a mobile phone or a pacemaker, we're all linked to machines." Architects cannot ignore that so AVATAR members study everything from medicine, nanotechnology, video games and Flaubert in their arcane pursuit of the future of what Spiller, whose bookshelves are lines with works on science-fiction, surrealism and alchemy, describes as the "virtual peeking into the actual."

Indeed, in one AVATAR manifesto, Spiller writes that we ought to design buildings with an "interior life, simple aspirations, goals and imperatives" - he dreams of a living city as sensitive as skin. "If you're a stockbroker, you could build an office where the walls pulse faster when the markets are shifting," he explains. "If you come from China and you're homesick, you could build a house that copied whatever was happening in you parents' house back in Shanghai. I mean, if you wanted, you could make architecture out of how fast your beard grows."

So far, most AVATAR designs exist only as prototypes, sketches or computer models, but that needn't always be the case. Although Spiller himself has remained in academia, many of his students have gone on to work in major architectural practices, where, he hopes, they will spread the AVATAR thinking like a 'virus'. He acknowledges that these technologies could be used for evil - for surveillance, social engineering or, worst of all, advertising - but it's out of our hands. "As Paul Virilio says, the Wright Brothers invented the plane…but they also invented the plane crash."