Deafness awards at Houses of Parliament 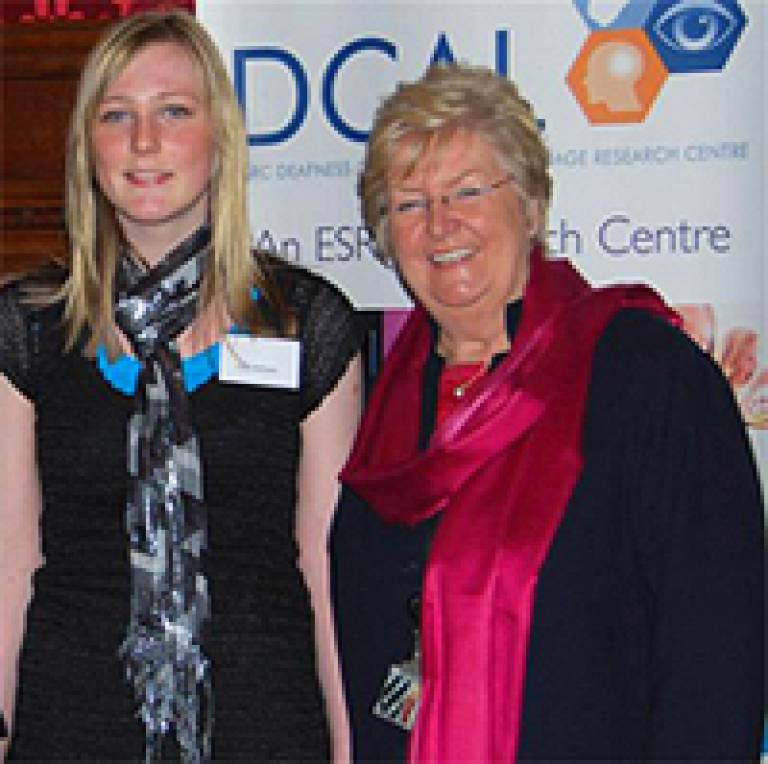 The award ceremony for 'It's my future: Being Deaf in 2018', a competition run by UCL's Deafness, Cognition and Language Centre (DCAL), was held at a ceremony at the Houses of Parliament earlier this month.

The competition invited deaf people aged 15-19 to write 1,000 words on how new ideas and research into deafness might have changed their lives by 2018 or even later. It was part of the Economic and Social Research Council's Festival of Social Science, which ran 7-16 March.

Sixteen-year-old Eilidh McEwen from Balloch near Glasgow came first, receiving her prize of £200 from Rosie Cooper MP. Eilidh expressed hope that learning sign language will be part of the national curriculum and that technological advances would help bring down barriers. She suggested adaptations to iPods to allow people with cochlear implants to hear music more easily and waterproof hearing aids that would enable more deaf people to hear the instructions of a swimming teacher, the whistle of a lifeguard, or just the chatter of their friends.

Rosie Cooper said: "Collectively all the entries highlighted that for Deaf people to achieve equality by 2018 there would need to be a change in society's attitude towards deafness. These young people wanted respect for who they are and to be included in every aspect of their community."

Professor Ruth Campbell of DCAL explained why the centre had held the competition: "Many advances in deafness research to date have been made by people who are not themselves deaf. We want to find out more about what deaf young people themselves think about where research in deafness should be going, and to raise awareness generally about how research in universities and elsewhere affects daily lives."

Malcolm Bruce MP, Chair of the all-parliamentary party group on deafness, hosted the awards ceremony and was one of the judges. He was joined on the judging panel by Professor Ruth Campbell, Deputy Director at DCAL; Tyron Woolfe, Deputy Director for Children and Young People at the National Deaf Children's Society; and Guido Gybels, Director of New Technology at the Royal National Institute for the Deaf.

To read Eilidh's winning entry in full, and to find out more about the work of DCAL, follow the link at the top of this article.