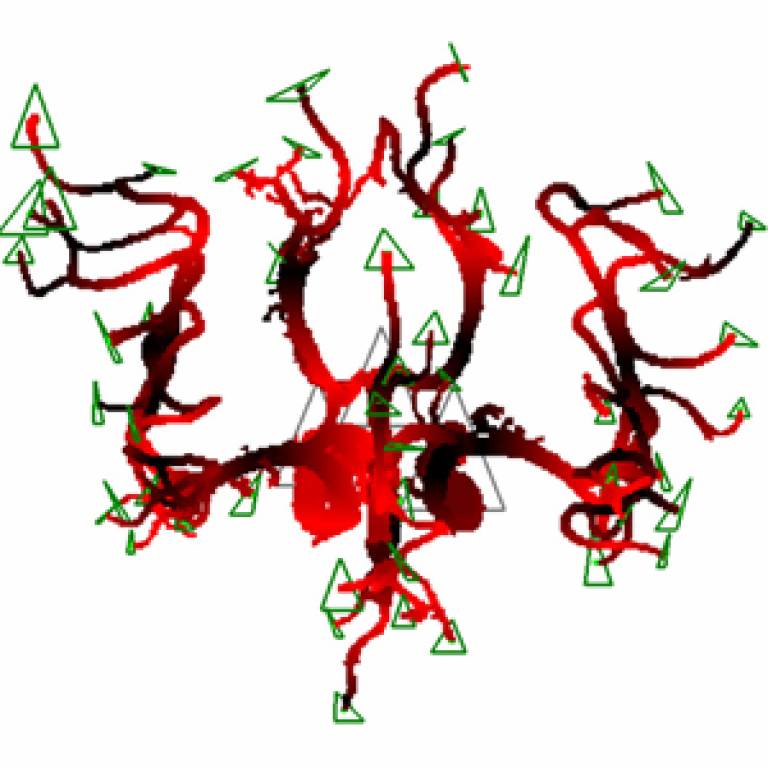 Pioneering work by UCL Chemistry promises to revolutionise the treatment of stroke victims and even eliminate animal experimentation.

The research by UCL's theoretical chemistry team at the Centre for Computational Science, led by Professor Peter Coveney, has been recognised by a major computing award in America.

The Transformational Science Award was made at the annual TeraGrid conference to Professor Coveney and his team for developing a computational model that could revolutionise magnetic resonance imaging (MRI) systems by providing real-time, three-dimensional analysis of blood flow in the brain.

Professor Coveney said: "The award is a feather in the cap for the project as well as the department, and recognition of the fact that we're doing real state-of-the-art work.

"Currently many MRI instruments give static, two-dimensional and indistinct images - our work allows precise real-time analysis, modelling and simulations. The National Hospital for Neurology & Neurosurgery, in Queen Square, with whom we collaborate, has just commissioned a new magnetic resonance angiography suite, which provides sufficiently high resolution images to make our simulation work meaningful.

"It's frontier science, but it may have applications in preventing and treating stroke victims and in the world of psychiatric medicine.

"And there's nothing to say that we couldn't eventually develop it for the entire vascular system for the treatment or prevention of major disease. Once you've modelled the whole body you could eliminate the need for animals in drug testing and replace it with accurate simulations."

Professor Coveney said: "The UK has one or two supercomputers, but the resources available in the US dwarves those available to academics in Europe. However, it is not only the availability of the resources, it's the policies governing access that are key to this application.

"There are various reasons why it's not happening across Europe now; incompatibilities in software, national and cultural boundaries, issues of data security and so on, but if the Europeans were more joined up we could be doing a lot more than we are able to do right now with just the computers in the UK."

Professor Coveney has worked with Professor Frank Smith (UCL Mathematics) and the project grew out of a shared interest in fluid dynamics and mathematical modelling applied to complex systems.

The work is part of the Grid Enabled Neurosurgical Imaging Using Simulation (GENIUS) programme - a global effort to deliver advanced neurological diagnostic tools - and an early example of a new initiative called the Virtual Physiological Human, in which Professor Coveney now has a leading role.
To find out more, use the links at the top of this article.