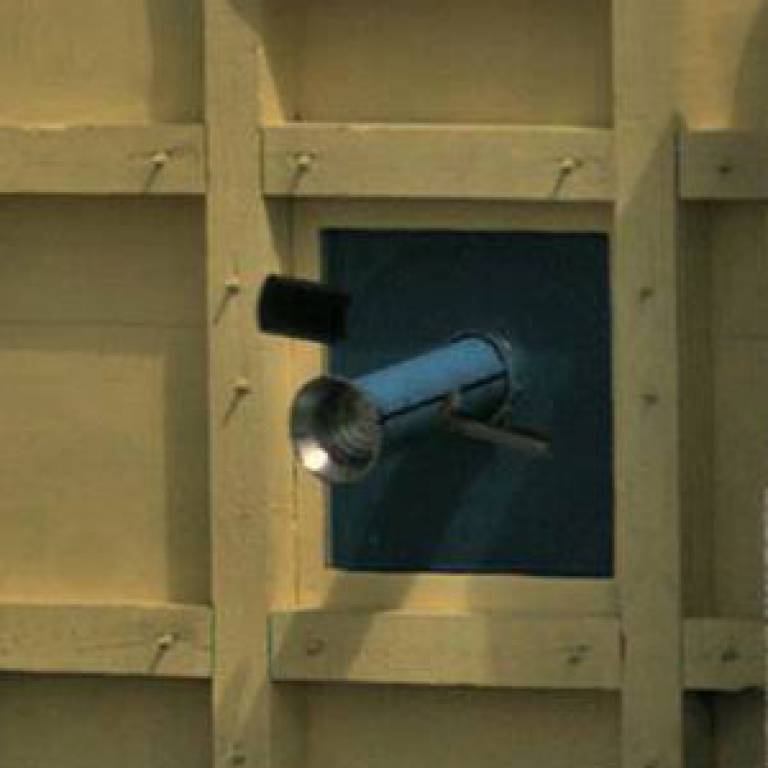 
High speed 'penetrators' that could one day be used to breach the surface of planets have successfully passed their first test in the UK, accelerating to 700 miles per hour before striking their target.

A team led by UCL test-fired the projectiles in Wales, recording a peak of 10,000 gee upon impact (where humans can survive up to 10 gee). Penetrators, which can carry
data-collecting systems and sensors, are being developed as an alternative to manned space flight for the future exploration of moons in our solar system.

The team, led by Professor Alan Smith from UCL's Mullard Space Science Laboratory,
Birkbeck College, Imperial College, the Open University, University of Surrey and
QinetiQ ran the first three test firings of the high speed penetrators at QinetiQ's long test track in Pendine, South Wales in May 2008. The projectiles were secured to a rocket sled and fired along a rail track.

The penetrators, which contained a data- and sample-collecting system, a variety of
sensors, accelerometers, a seismometer and a mass spectrometer (for analysis) hit a
sand target at around 700 miles per hour. The electronics remained fully operational
during impact, recording the deceleration in minute detail which peaked at about 10,000 gee (10,000 times the acceleration due to gravity, where humans can only
survive around 10 gee).

Penetrator technology is being developed for future space exploration, to pierce the
surface of planetary bodies such as our moon and the icy moons of Jupiter and Saturn. Penetrators offer a low cost approach to planetary exploration, but the enormous impact forces have meant that scientists have so far been reluctant to
trust them.

Professor Smith said: "Prior to this trial, we had to rely on computer modelling and analysis. As far as we can tell the trial has been enormously successful, with all aspects of the electronics working correctly during and after the impact. I congratulate the team on this really impressive achievement - to get everything right first time is wonderful, and a tribute to British technology and innovation."

The impact trial is part of a series of technical developments and studies in preparation for future planetary space missions. These include the proposed UK MoonLITE mission to the Moon which is hoped to be launched in 2013, and possible missions to moons of the outer planets - Europa, Ganymede, Enceladous and Titan. The trials were funded by the Science and Technology Facilities Council as part of
MSSL's Rolling Grant.

Image 1: The penetrator reaches the target