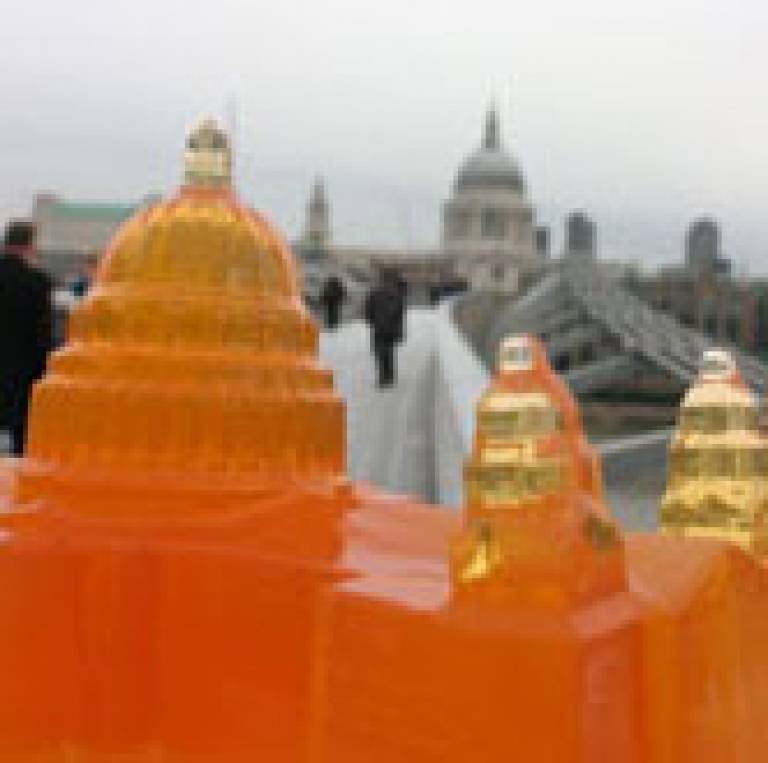 A jelly banquet to be hosted by UCL will feature a full spread of specially designed jellies shortlisted for an architectural competition. At the banquet, to be held on Friday 4 July 2008 in UCL's Main Quad on Gower Street, the winner of the competition will be announced, while performers in jelly costumes will dance to a wobbling soundtrack.

The jellies, designed by world-leading architects such as Rogers Stirk Harbour and Partners, Will Alsop and Grimshaw, were submitted for a competition run by architectural foodsmiths Bompas and Parr, to explore the relationship between food and architecture. The entries will be judged on innovation, aesthetics and 'wobble factor'.

The winning design will be announced at the banquet, which will feature all ten finalists displayed in a range of mouth-watering flavours. The event, part of the London Festival of Architecture, will also see performers in jelly costumes created by lingerie designers Strumpet and Pink dancing around a table laden with specially commissioned jellies, along with wobbling soundscapes, projections and an aromatic concoction of delicious smells intermingling within UCL's neo classical quad. Following the exhibition, a celebratory party will continue late into the night.

Professor Stephen Gage (UCL Bartlett School of Architecture) who is one of the judges, said: "As babies, we first learn about our world by touching it and putting bits of it in our mouth. Part of our subconscious appreciation of shape may well be a dim memory of how it might feel in our mouth. Thus, a dome is round and coolly satisfying, while a pointed building is like a sharp and dangerous knife. Jelly architecture returns architecture to the mouth, where we can once again taste it."

Harry Parr, of Bompas and Parr and a final-year student at UCL Bartlett, said: "Jelly has a long and noble history, being a favourite of Antonin Careme 'king of chefs and chef of kings', who cooked for Napoleon, King George IV and Tsar Nicholas I. Careme wrote numerous architectural treatises and made his name through his elaborate centrepieces."

Sam Bompas, of Bompas and Parr and a UCL alumnus, says:  "We want to bring back fine jelly, which featured in the best Victorian banquets. Our jellies are almost entirely comprised of fresh fruit, so are a low-calorie diet-friendly dessert. Creating jellies in this manner is labour-intensive, with the fruit hand-prepared and freeze-thaw clarified."

Dr Andrea Sella, UCL Department of Chemistry, says: "Gels are amazing materials, not quite solid, not quite liquid. They form when a loose network of molecular chains cross-link, with the intervening spaces filling with water or another solvent. Although their wobbliness, transparency, and softness is one of the key attractions in cooking, materials chemists use gels to make interesting new ceramics. Soaps are used to form 3-D structures embedded in the gel. When such gels are fired in a furnace, they burn to ceramics imprinted with the hollow image of the soap, yielding structured materials that are finding growing use in catalysis, solar cells, batteries, and other products."