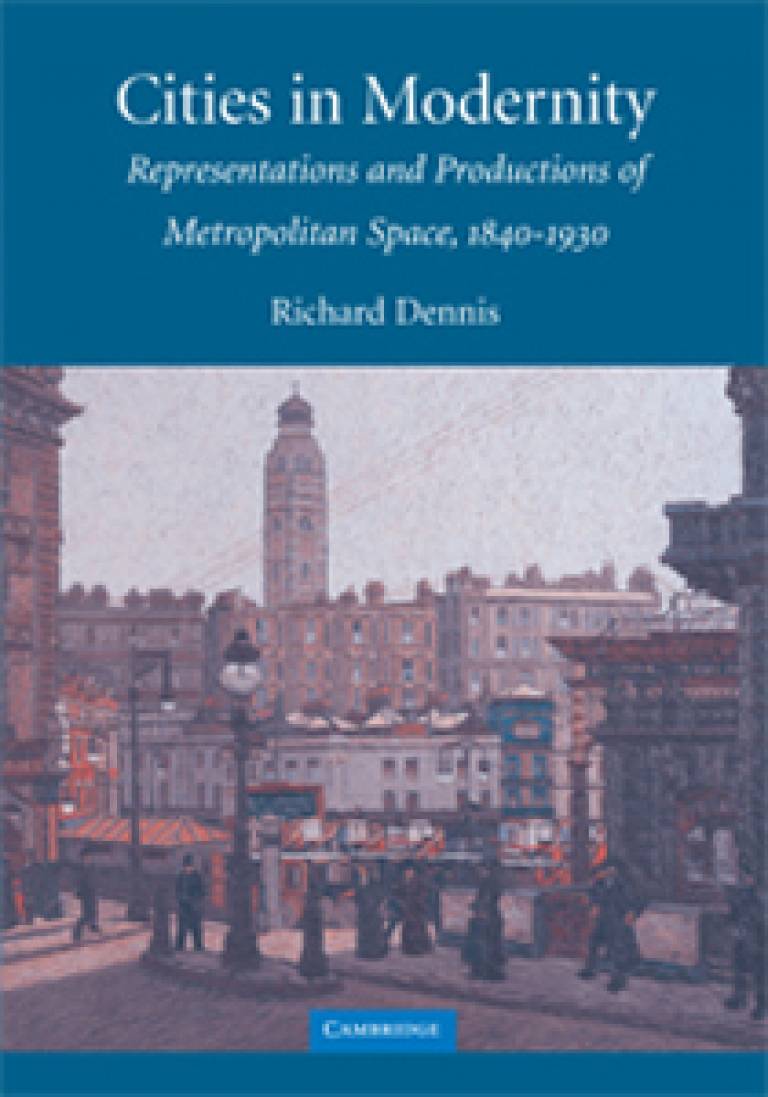 
In 'Cities in Modernity: Representations and Productions of Metropolitan Space, 1840-1930', historical geographer Dr Richard Dennis (UCL Geography) explores what made cities 'modern' in the nineteenth and early twentieth centuries.

Drawing his evidence principally from London, New York and Toronto - London often studied as much as an imperial as a modern city, New York a more obviously modern city in this period, and Toronto a comparative baby in population terms but striving for metropolitan status and intriguingly positioned politically and imaginatively 'between' Britain and America - Dr Dennis focuses on the relationship between, on the one hand, processes of modernisation in government, technology and economy, but especially innovations in the built environment and changes in the spatial structure of cities and, on the other, modernity as a social and cultural experience.

The first half of the book discusses new ways of seeing cities in the nineteenth and early twentieth centuries, looking at cities in contemporary political and religious discourse, at the growth of social survey and city mapping, and at the representation of cities in art and literature. Later chapters look at changes to and on city streets, at new forms of residential environment - middle-class and working-class suburbs, apartments and tenements in North American cities, flats and model dwellings in London - and at new kinds of retail and business spaces.

One of Dr Dennis's aims is to build bridges and make connections between humanities and social science ways of looking at cities, and between culture and economy - the book begins by discussing some real bridges - Brooklyn Bridge, Tower Bridge and the lesser known Bloor Street Viaduct in Toronto - and ends by analysing new networks of connection in intra-urban communications and infrastructure, including sewers in London and the elevated railway in New York.

Integral to the book are illustrations reproducing contemporary postcards and advertisements, highlighting the tension between modernity, tradition and the picturesque, or aligning a modern environment with style and cosmopolitanism, a variety of specialised maps, from the 'glove map' intended for ladies visiting the Great Exhibition, to fire insurance maps which cartographically embody the connections between modernity and risk, and an 1880s sewer map which plotted the time taken for sewage to flow across London.

Dr Dennis also discusses and reproduces numerous works of art and draws on his extensive research into the representation of urban space in literature.

Newly drawn maps and plans, prepared by Miles Irving and Cath D'Alton (UCL Geography Drawing Office), chart the distribution and spread of offices and department stores, the impact of Tower Bridge and Victoria Street on their environs, and the functioning of space within new apartment buildings.

The book closes with a brief discussion of Harmsworth's Magazine's 1902 article, 'If London Were Like New York', speculating on the effects of an American invasion. There are elevated trains on Tower Bridge, Holborn-Oxford Street has become Broadway, and Mansion House is Tammany Hall.'Cities in Modernity: Representations and Productions of Metropolitan Space, 1840-1930' is published by Cambridge University Press in hardback and paperback.