Protecting the cradle of civilisation in ancient Iraq 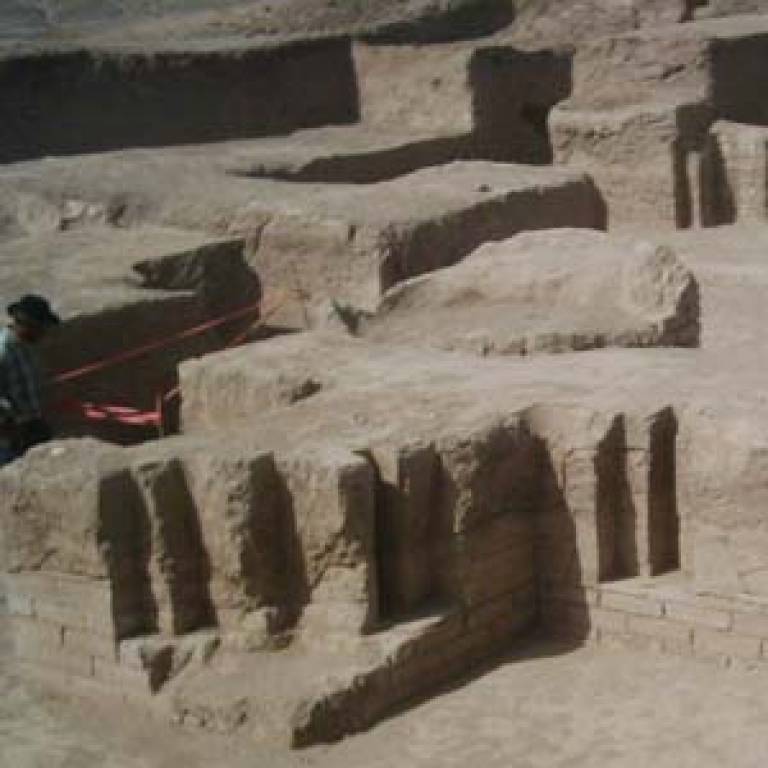 Sitting in the office of Professor Roger Matthews at the UCL Institute of Archaeology, Dr Abbas al-Hussainy tries to convey the enormity of the challenges facing him. As Head of Department of Archaeology at Al Qadissiyah University in Iraq, he is concerned about the security of some of the world's most important archaeological sites - and with good reason.

It is a difficult time to be an archaeologist in Iraq. As Chairman of the State Board of Antiquities and Heritage from 2006-2007 - Iraq's highest-ranking archaeological post - Dr Abbas put three projects into effect in order to protect the heritage of this troubled country. Firstly, he instigated a survey of all of Iraq, the first one to cover the entire country, with the ultimate aim of recording all archaeological and historical sites and monuments in Iraq, which is still an unknown quantity but known to be at least 12,000. The survey has also been cataloguing damage done to sites in Iraq. Secondly, he started rescue excavations, the first to be conducted in Iraq since 2003, at sites that have been damaged or are otherwise under threat. Across the country he has selected 11 locations, within 'safe' areas, to focus on. Important results are already coming from these rescue excavations. Finally, he has carried out a programme of preservation and conservation of sites in poor condition, including the World Heritage Site of Hatra, Khan al-Ruba'a, Kefel, Thareb Castle, and others.

There are several sources of the threats facing the sites. Firstly, in the turbulent and violent years that have followed the occupation of Iraq in 2003, extremist groups have proliferated. As well as mass killings of soldiers and civilians, groups such as al-Qaeda have targeted archaeological and heritage sites and wilfully damaged or destroyed them. The Golden Dome of Samarra, the church of al-Khuder in Kbesa, and the mosque of Yahia Ben Al-Qasim in Mosul, have all been affected.

However, the actions of coalition forces have also played a part in threatening the country's heritage. Bases occupied by coalition forces on and near the ancient cities of Babylon and Ur have caused damage as the noise they generate causes cracking in the clay bricks from which many early buildings are constructed. In one incident, a coalition army ammunition dump was exploded at Khan al-Ruba'a near Karbala, destroying the ancient site.

Neglect, resulting from the disintegration of organisational structures required to manage sites and the dangers of reaching some of them, is a further source of damage. Dr Abbas has identified the Assyrian capital city of Nimrud and historic buildings in Basra, Najaf, Baghdad and Mosul, and many others, as being at risk.

But not all of the problems can be put down to the 2003 invasion. Looting of sites, especially in the south of Iraq, has been going on since the Saddam era. Some blamed local people for the initial looting, which began after the first Gulf War in 1991. Dr Abbas argues instead that economic conditions for farmers were better than for city dwellers during the 1990s, so there was little motive for looting. A more likely cause, he argues, is that the area, which rose up against the regime after the withdrawal from Kuwait in 1991, was deliberately targeted by the regime. Reprisals included the destruction of date-palm orchards and the draining of marshlands, as well as allowing the looting of archaeological sites.

Currently, Dr Abbas is at UCL as a Visiting Academic, working on articles relating to his recent excavations of sites at Marad and Thareb, in Diwaniyah province, south of Baghdad, as well as giving lectures and seminars.

The Marad project, begun in 2005, marked the first excavation to take place in Iraq since the 2003 invasion. There, Dr Abbas discovered a complex including a temple to Lugal Marda (the god of Marad), a large sacred wall, houses, an administrative area and many objects, such as cylinder seals (carved stone cylinders used to make impressions on clay tablets), pottery and terracotta figurines. The site was especially important during the Old Babylonian period, 2004-1595 BC, and was conquered by Hammurabi, the famous king of Babylon.

Dr Abbas also directed an expedition to preserve Thareb Castle, which dates from the fifth century AD. He has excavated the inside of the structure and repaired its foundations, whilst also uncovering a cemetery at the site dating from the Sassanian period. The cemetery at Thareb, however, had been completely looted by the time he got to it.

For Dr Abbas the job of preserving Iraq's antiquities is vitally important. The region of Mesopotamia is commonly referred to as the 'cradle of civilisation' and was home to the earliest urban, literate society - the Sumerians, who lived in the fourth-third millennia BC. Among Dr Abbas's priorities when he returns to Al Qadissiyah University will be to continue his excavations and survey at Marad and in the surrounding area.

In the meantime, his visiting fellowship at UCL, funded by the British Universities Iraq Consortium and the British Institute for the Study of Iraq, provides a safe environment in which to work on writing up his latest work, as well as an opportunity to give lectures and attend conferences, where he can spread the news of the archaeological crises faced by Iraq. Further exchange visits are planned for other Iraqi academics, with two more archaeologists due to come to the UCL Institute of Archaeology for shorter terms, as well as a visit by the President of Al Qadissiyah University. Dr Abbas said: "I am very grateful to all my colleagues at UCL and in the UK for enabling this visit."

Professor Matthews, an expert in the archaeology of the Near East, who has helped organise the visits, was himself the director of the British School of Archaeology in Iraq (now the British Institute for the Study of Iraq) from 1988-96. He said: "These exchanges provide valuable opportunities to explore bilateral connections between our institutions, and help us to learn more about Iraqi archaeology. It is important for UCL to play a part in assisting academics facing hardship and danger."

Assisting refugee academics
The Council for the Assistance of Refugee Academics (CARA) celebrates its 75th anniversary this year. The occasion will be marked on 23 January with a lecture by Albie Sachs, a Justice in the Constitutional Court of South Africa.

In 'Why I was not Despised and Rejected', Justice Sachs will discuss a period of his life spent in Britain while in exile from his native South Africa, where the security services had tried to assassinate him for his work defending people charged under Apartheid legislation. He received grants from CARA in the 1960s and again in 1989, which helped him first to re-establish his career as a lecturer at Southampton University, and then to come to the UCL Institute of Commonwealth Studies.