Found: The frog from hell 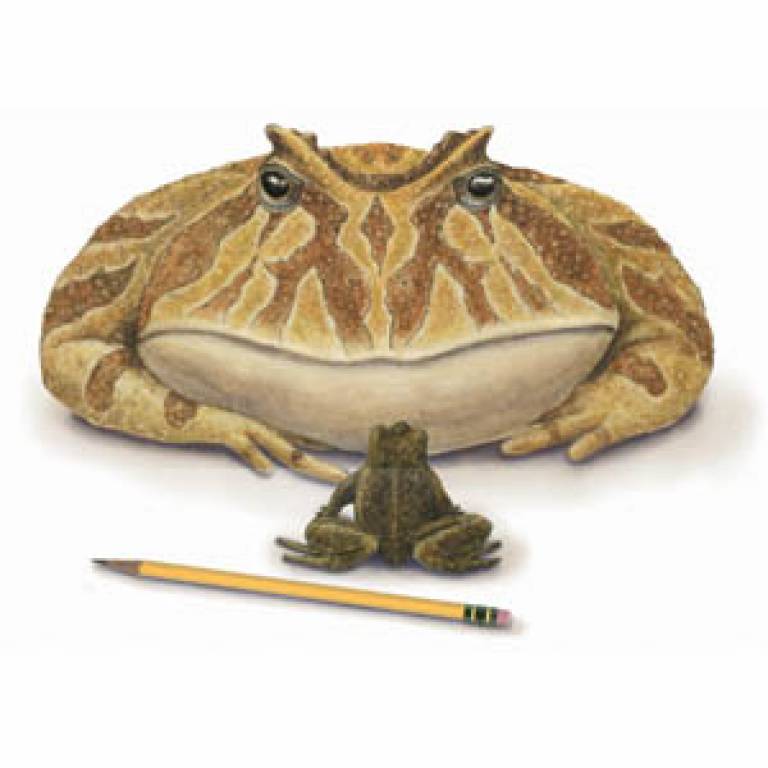 pnas.org/" target="_self">Proceedings of the National Academy of Sciences

A team from UCL and Stony Brook University, New York, have discovered a fossil of a giant dinosaur-eating frog in Madagascar, giving weight to the theory that the island off Africa's east coast was once linked to India and South America.

The 70 million-year-old frog, dubbed Beelzebufo ('the frog from hell'), is of a kind previously thought only to live in South America. Weighing 4kg and with a body length of up to 40cm, it had a squat body, huge head and wide mouth.

Professor Susan Evans (UCL Biosciences) said: "This frog, a relative of today's Horned toads, would have been the size of a slightly squashed beach-ball, with short legs and a big mouth. If it shared the aggressive temperament and 'sit-and-wait' ambush tactics of living Horned toads, it would have been a formidable predator on small animals. Its diet would most likely have consisted of insects and small vertebrates like lizards, but it's not impossible that Beelzebufo might even have munched on hatchling or juvenile dinosaurs."

The find is also interesting because it sheds new light on a debate about how the earth's land masses used to be arranged.

Professor Evans continued: "Our discovery of a frog strikingly different from today's Madagascan frogs, and akin to the Horned toads previously considered endemic to South America, lends weight to the controversial paleobiogeographical model suggesting that Madagascar, the Indian subcontinent and South America were linked well into the Late Cretaceous. It also suggests that the initial spread of such beasts began earlier than that proposed by recent estimates."

The discovery, published in the journal 'Proceedings of the National Academy of Sciences', adds a new species to Madagascar's colourful evolutionary history, which includes meat-eating dinosaurs, plant-eating crocodiles and giant snakes.