Visit from HM Queen Beatrix of the Netherlands On 4 December, Her Majesty Queen Beatrix of the Netherlands made a private visit to UCL's Department of Dutch - the UK's first and largest centre for the study of the culture and history of the Low Countries.

During an event in the Jeremy Bentham Room, Her Majesty the Queen was presented with the first copy of a new English translation of 'Young, inspired and committed - the Chronicle of a European Venture 1962-1968' - edited by Jane Fenoulhet, Senior Lecturer in Dutch at UCL. It tells the story of the European Working Group - a pan-European voluntary organisation for young people which was established and presided over by Queen Beatrix in an attempt to transcend national borders and benefit developing communities.

The event was opened by Professor Malcolm Grant, President and Provost of UCL, who welcomed the distinguished guests. Professor Henry Woudhuysen, UCL Dean of Arts & Humanities, then read a speech on behalf of the Chair of UCL Council, Sir Stephen Wall (European historian and former adviser on Europe to the Prime Minister), who was unable to attend in person. 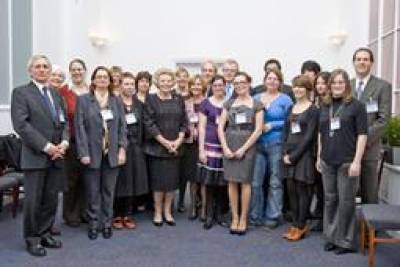 Sir Stephen's speech reflected on the strengths of 'Young, Inspired and Committed' as an account of history given by actual participants: a recounting of events without retrospective justification. The 1960s was an era of student idealism, and although 'Young, Inspired and Committed' reflects upon the failures of the European Working Group as well as its successes, it was composed of young people who did something about their beliefs, who dared to be "bold, brave and out of line", he said.

Her Majesty Queen Beatrix of the Netherlands then formally presented the first copy of  'Young, Inspired and Committed' to Mrs Catherine Dyas van Popta, widow of Martin Dyas, to whom, along with David Mitchnick, the work is dedicated. Her Majesty the Queen acknowledged the energy that had gone into the work's publication, and talked about the belief of the European Working Group that Europe could and should develop a union that would make a difference to the world.

Finally, four current students from UCL Dutch talked about what Europe means to them. Mark Potter, a final-year undergraduate, talked about his year in the Netherlands through the Erasmus scheme and how it encouraged multilingualism and multiculturalism, helping to dispel "the dreadful image of Brits abroad." 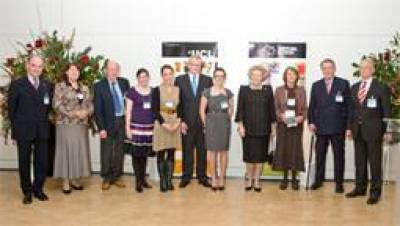 MA student Julia Smith talked about her belief in a culturally diverse Europe that is not stifled by bureaucrats, and which continues to ask what responsibility it has in the world.

Final year undergraduate Debbie Iles then contrasted current-day Europe with the Europe of the 1960s: "What once was a dream is now a reality, and we have the freedom to enjoy the benefits fought for in the '60s", she said.

"We're delighted and honoured to welcome Her Majesty the Queen to UCL," says Professor Theo Hermans, Head of UCL Dutch. "We have a number of collaborative research projects with Dutch and Flemish universities and this visit is yet another illustration of the strong relationship UCL enjoys with the Netherlands. We have exciting plans for the department and look forward to working closely with the UK Embassies of Belgium and the Netherlands and with the Flanders Representation over the coming years."