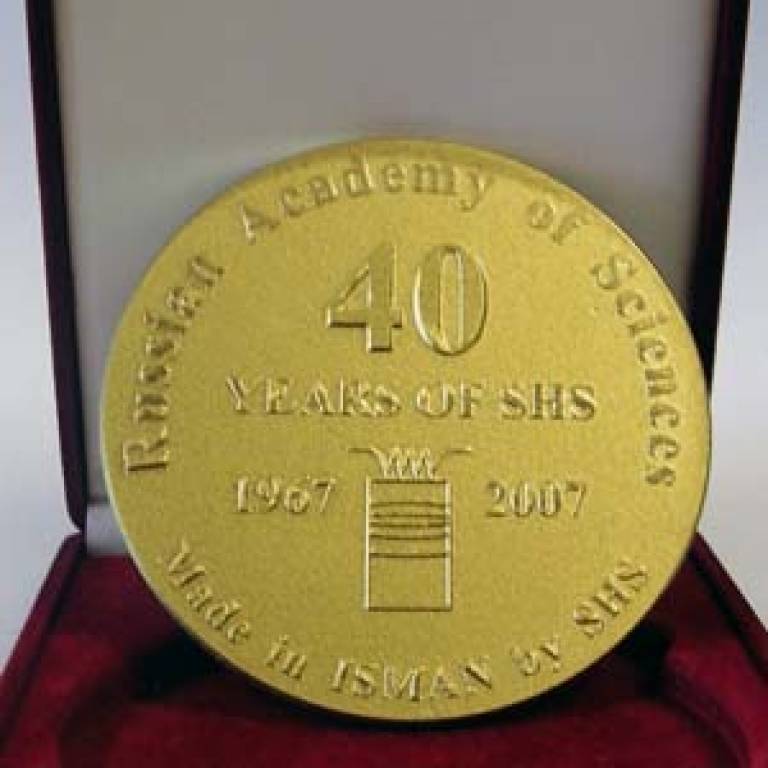 Professor Ivan Parkin, UCL Chemistry, has been awarded the Kroll medal from the Institute of Materials, Minerals & Mining - just a few months after receiving the Jubilee Medal from the Russian Academy of Sciences.

The Kroll medal is awarded for contributions to the academic science underpinning applications in industry. Professor Parkin, whose colleague at UCL Chemistry, Professor Julian Evans, received the award in 2005, will be presented with the medal at a ceremony in October this year.

Three aspects of his work over the last few years have qualified him for the prize. Research into glass coatings carried out in association with Pilkington Glass led to the development of Thermoglaze, a patented product that helps preserve energy. He also carried out research alongside Professor Michael Wilson (UCL Eastman Dental Institute) looking at nanoparticles with antimicrobial qualities, which are now being developed into a method for killing MRSA, the hospital 'superbug'.

The third area of Professor Parkin's research is concerned with Self-Propagating High-Temperature Synthesis (SHS), a process by which new materials are created using a controlled explosion. The energy given off in the reaction passes through a solid material, rapidly transforming it into another solid, often with useful industrial properties. SHS is a major industry in Russia (where the process originated) as well as China, the US and Japan, but as a research field it is small in the UK, with only around ten active researchers. His research, which uses very high magnetic fields during SHS to further alter the product material's properties, has pointed the way to new industrial materials.

The Kroll medal comes soon after Professor Parkin received the Russian Academy of Sciences' Jubilee Medal, which was awarded in October last year - also for work in the SHS field. Owing to the dominance of Russians in SHS, Professor Parkin is the first Briton ever to receive the accolade. The Jubilee medal is itself manufactured using SHS, and one of its faces shows a simple diagram of the process.

Image: Professor Parkin's Jubilee Medal. The diagram illustrates the transfer of energy through a solid in the SHS process.