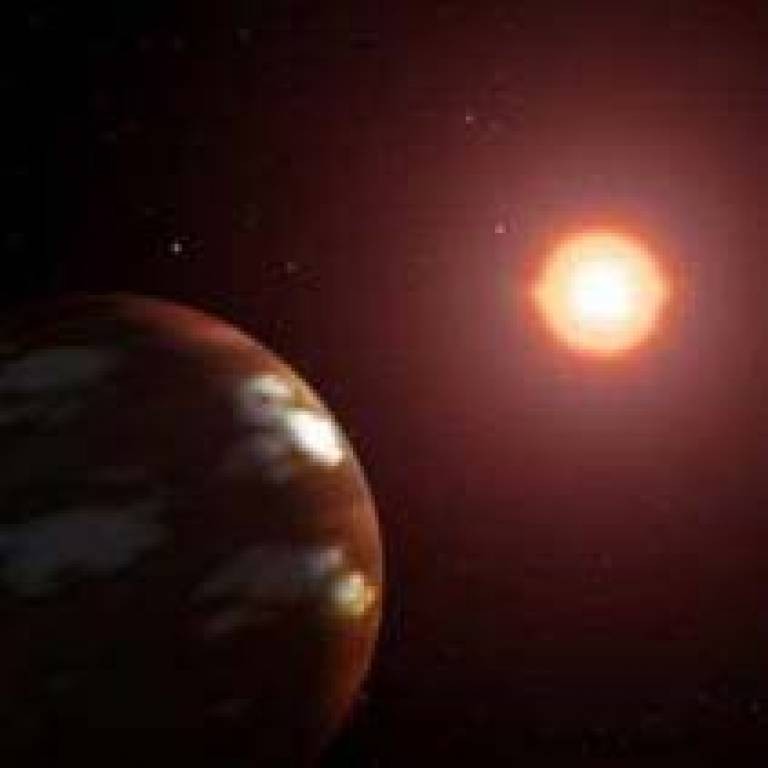 Scientists from UCL and Spain have discovered a possible terrestrial-type planet orbiting a star in the constellation of Leo. The new planet, which lies at a distance of 30 light years from the Earth, has a mass five times that of our planet but is the smallest found to date. One full day on the new planet would be equivalent to three weeks on Earth.

The team of astronomers from the Spanish Research Council (CSIC) working with Dr Jean-Philippe Beaulieu, a visiting astrophysicist at UCL, made the discovery from model predictions of a new exoplanet - a planet outside our solar system - orbiting a star in the constellation of Leo.

Simulations show that the exoplanet, dubbed GJ 436c, orbits its host star, GJ 436, in only 5.2 Earth days, and is thought to complete a revolution in 4.2 Earth days, compared to the Earth's revolution of 24 hours and full orbit of 365 days.

The study, published this week in 'Astrophysical Journal', predicted the presence of a small exoplanet perturbing an inner planet, producing changes on its orbit. A re-analysis of archival radial velocities also permitted the identification of a signal that perfectly matches the simulations and corresponds to a planet in resonance with the inner one, meaning that for every two orbits of the known planet the new planet completes one.

Lead author Dr Ignasi Ribas (CSIC) said: "After final confirmation, the new exoplanet will be the smallest found to date. It is the first one to be identified from the perturbations exerted on another planet of the system. Because of this, the study opens a new path that should lead to the discovery of even smaller planets in the near future, with the goal of eventually finding worlds more and more similar to the Earth."

Dr Jean-Philippe Beaulieu, visiting astrophysicist at UCL Physics & Astronomy, said: "This is the fourth super-Earth planet discovered. This planet is the hot twin of the frozen super-Earth (OGLE-2005-BLG-390lb) we discovered by microlensing two years ago. Other previously discovered planets of this class are the two hot super-Earths Gl 581b and Gl 876d detected by their Doppler wobble."

Dr Giovanna Tinetti, UCL Physics & Astronomy who recently calculated the putative properties of this planet, says: "Calculations indicate that the temperature of the planet could be within 400-700 Kelvin - 127-427 Celsius - but it could locally be as low as 350 K-77- at the poles, depending on the type of atmosphere."

Most of the 280 or so planets discovered to date are gas giants similar to Jupiter, although some with masses below 10 times that of the Earth have already been found. Planets with masses of between one and 10 times the Earth are often dubbed super-Earths. In this case, current models predict that the new planet is a rocky type and has a radius some 50 per cent larger than the Earth.