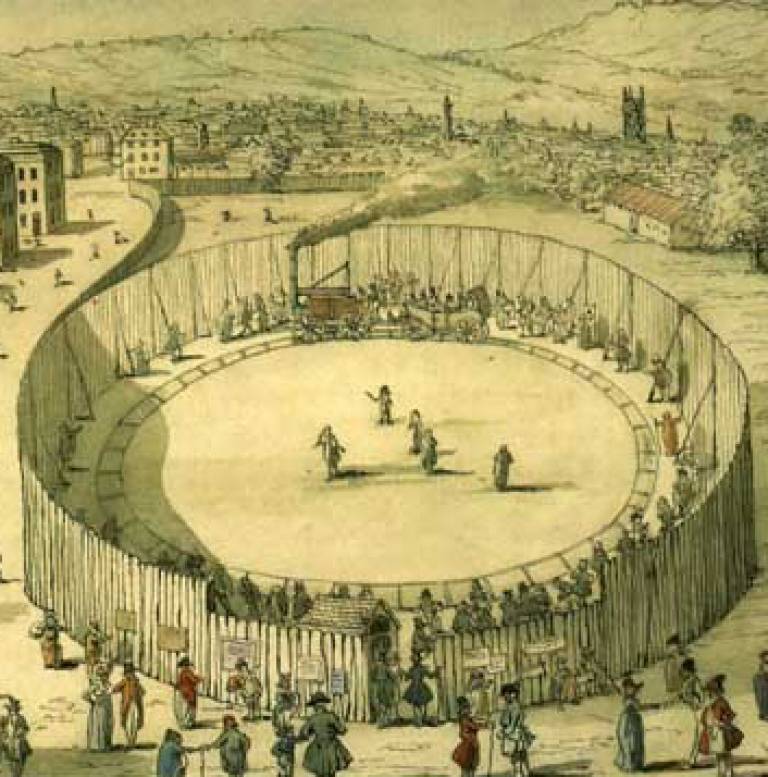 The bicentenary of passenger rail will be marked in June 2008 by the UCL-Eurostar Innovation & Invention Competition along with the Trevithick Bicentennial Dinner, an exhibition at UCL and the 4th International Early Railway Conference.

Arguably the greatest mechanical engineer of his time, Richard Trevithick (1771-1833) patented an effective high-pressure steam engine in 1802. Trevithick's design, working at something like 10 times the usual pressure, was compact, nimble and efficient. For the first time, steam power could be applied not just in the mine, mill or factory, but in the workshop or the farmyard, and it was easily adaptable to a variety of tasks.

In 1808, Trevithick arranged an exhibition of his steam locomotive in London. He built an enclosed circular track on land near where UCL now stands, and designed an extraordinarily advanced engine, 'Catch Me Who Can', to provide rides for paying customers.

To celebrate the bicentenary of the 'Catch Me Who Can' experiment, the Eurostar-UCL Trevithick Innovation & Invention Prizes aim to capture the essence of the paradigm change that resulted from Trevithick's endeavour. UCL staff and students are challenged to present a similar audacious approach to innovation in one of six areas. Eurostar has donated tickets for the winners.

Prizes will be presented at the Trevithick Bicentennial Dinner, sponsored by O2, on 11 June 2008. The deadline for entries is 20 May 2008; for entry conditions and instructions, use the link at the top of this article.

All the winners' entries will be exhibited as part of the Trevithick exhibition in UCL's South Cloisters from 9-13 June 2008, featuring items on loan from the Science Museum London, the National Railway Museum, the Royal Cornwall Museum and the Steam Museum, Ireland.

The Trevithick celebration will also incorporate the 4th International Early Railway Conference, and is supported by the Newcomen Society, the Trevithick Society, the National Railway Museum and the Science Museum.

Initiated by Professor Nick Tyler, Head of UCL Civil, Environmental & Geomatic Engineering, the Trevithick celebration has been three years in planning. He said: "We have been exceptionally fortunate in the support of our major partners and sponsors, including the Early Railway Conference, the Science Museum, the National Railway Museum, Eurostar and O2. This has allowed us to represent a range of transport vision, from inventive beginnings through the international, 'connected' travel of today to the research of the future."

Lower image: An accurate illustration of the 'Catch Me Who Can'