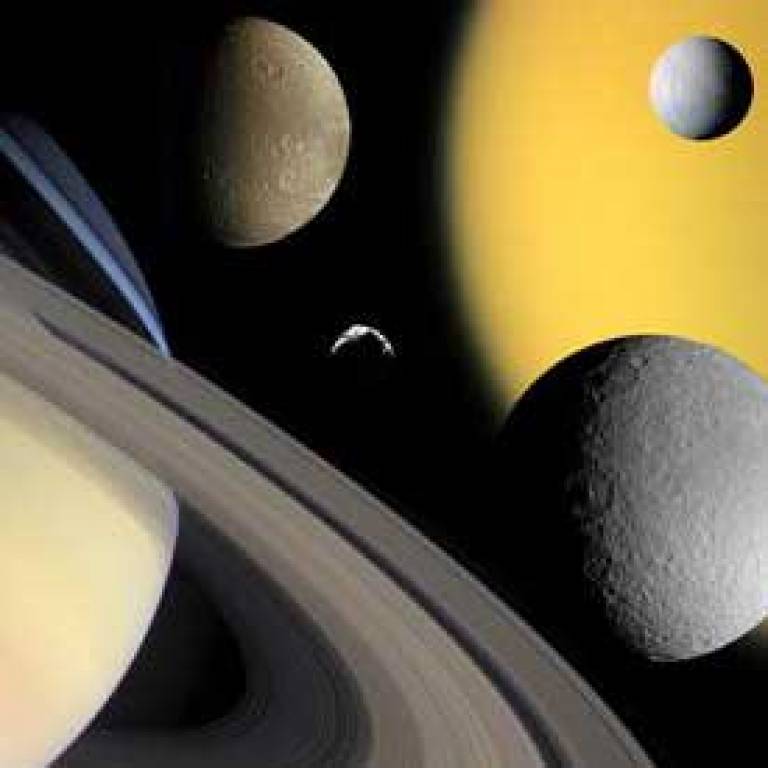 UCL scientists are relishing the prospect of the two-year extension on the Cassini-Huygens mission, announced by NASA this week.

The historic spacecraft's stunning discoveries and images have revolutionised knowledge of Saturn and its moons. UCL researchers have played key roles in the mission instruments and the scientific discoveries.

Cassini's mission originally had been scheduled to end in July 2008. The two-year extension will include 60 additional orbits of Saturn and more flybys of its exotic moons. These will include 26 flybys of Titan, seven of Enceladus, and one each of Dione, Rhea and Helene. The extension also includes studies of Saturn's rings, its complex magnetosphere, and the planet itself.

Professor Andrew Coates (UCL Mullard Space Science Laboratory), lead investigator on the UCL MSSL-provided electron spectrometer, part of the Cassini plasma spectrometer on the orbiter, said: "We are really looking forward to the unique, cutting-edge opportunities that this will bring to UCL and to the planetary science community in general. In particular, we will be able to follow up pioneering discoveries we have already made with our instrument on the mission - including Saturn's ring atmosphere, heavy negative ions high in Titan's atmosphere which are related to Carl Sagan's tholins, water-related effects at Enceladus and in Saturn's magnetosphere and unexpected fluctuations related to Saturn's rapid spin rate. The extended mission will give more data on the complex hydrocarbon and nitrile chemistry in Titan's atmosphere as well as further and even closer tastes of the plumes from the geysers of Enceladus - at only 15 miles above the surface. As always in space exploration, we also expect the unexpected and there is a huge amount still to learn about this fascinating system."

Based on findings from Cassini, scientists think liquid water may be just beneath the surface of Enceladus. That's why the small moon, one-seventh the size of Earth's moon, is one of the highest-priority targets for the extended mission.

The geysers, which shoot out at a distance three times the diameter of Enceladus, feed particles into Saturn's most expansive ring. In the extended mission, the spacecraft may come as close as 15 miles from the moon's surface.

Cassini-Huygens' observations of Saturn's largest moon, Titan, have given scientists a glimpse of what Earth might have been like before life evolved. They now believe Titan possesses many parallels to Earth, including lakes, rivers, channels, dunes, rain, snow, clouds, mountains and possibly volcanoes.

Since its landing in January 2005, Huygens has provided a wealth of data that UK scientists are currently analysing. Further work from Cassini will enhance and extend what has been learned from the Huygens data.

Unlike Earth, Titan's lakes, rivers and rain are composed of methane and ethane, and temperatures reach a chilly minus 290 degrees Fahrenheit. Although Titan's dense atmosphere limits viewing the surface, Cassini's high-resolution radar coverage and imaging by the infrared spectrometer have given scientists a better look.

Other activities for Cassini scientists will include monitoring seasons on Titan and Saturn, observing unique ring events, such as the 2009 equinox when the sun will be in the plane of the rings, and exploring new places within Saturn's magnetosphere.

Dr Geraint Jones, an investigator on the Cassini plasma spectrometer (CAPS) and magnetospheric imaging instrument (MIMI) teams, said "I'm really looking forward to the close flyby of Rhea - we recently discovered evidence for rings around this moon and led a multi-instrument study on this. Now we have the chance to go back. Also more information on how the ghostly ring spokes may be related to thunderstorms on Saturn itself, will be of great interest. The new data - and what we have already ­- will keep us busy for many years to come."