More than 200 people packed into a UCL lecture theatre last week to hear Serie A striker Cristiano Lucarelli speak at a seminar organised by Dr John Foot (UCL Italian) on the state of Italian football. 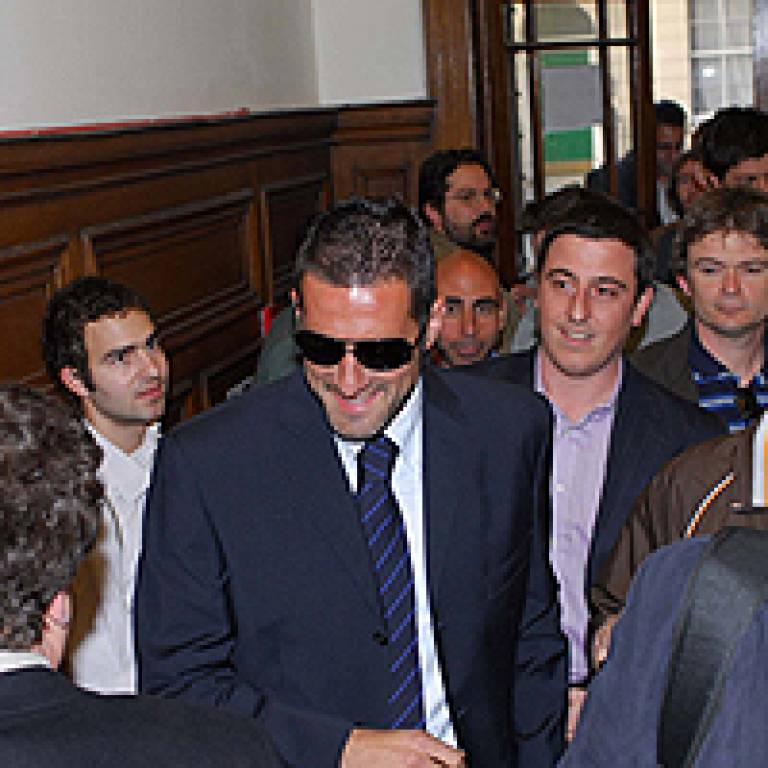 Dr Foot invited the Livorno and Italy player, who is known for speaking out against the corruption that pervades Italian football, to address the question 'Money, Politics and Violence: Is There Any More Space for Passion in Italian Football?' on Monday 30 April.

Dr Foot, who has recently published the book 'Calcio: A History of Italian Football' introduced Lucarelli and his agent Carlo Pallavicino as rare exceptions in the corrupt Italian football industry.

Lucarelli, currently the second top scorer in Serie A, took a pay cut to play for his hometown Livorno. Under his captaincy, the team has risen to the top league in Italy after an absence of fifty years. He also has a well-publicised admiration for Che Guevara, another reason that he has fallen foul of Italian national coaches.

Lucarelli entered the seminar to unbridled applause from the unorthodox lecture audience of language students, football fans and Italian media. Through a translator, he explained that a complete absence of the concept of gracious defeat is at the heart of the problems that now beleaguer Italian football: 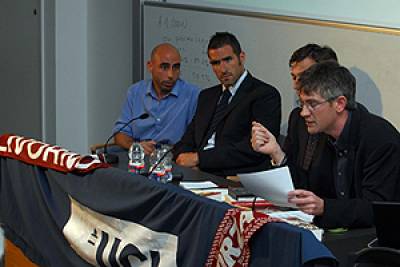 "To improve football and defeat violence you must be educated to accept defeat," he said. "When I see English football, when a team is relegated, the fans actually clap. In Italy you cannot even leave home. I have played for several teams and I went two divisions down. For a family it really becomes hell living in a situation like that. You cannot take your wife shopping. You cannot take your children to school. If things do not go well you can always find someone on the street willing to commit a violent act… Winning at all costs and by all means, this is the big problem that Italian football has."

Lucarelli also spoke of his pleasure of seeing children and families at football matches in England - a rare sight in Italy due to violence - and said that in an ideal world he would play for Livorno in England.

Pallavicino, who has recently written a biography of Lucarelli entitled "You can keep your billion [lire]", expressed his dismay at the series of high-profile match-fixing scandals in his country and at the Italian government's inability to impose reforms on top clubs. Speaking in English, he agreed with the conclusion in Dr Foot's book that Lucarelli is at least one reason for James Richardson Spensley to be proud of importing football to Italy. 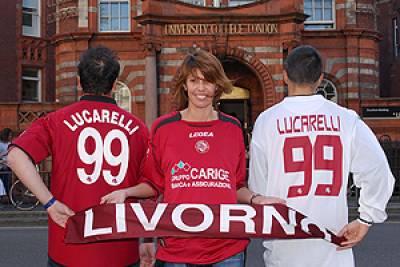 A trailer for a new documentary based on Lucarelli's life ('99 Amaranto') was shown as well as a selection of his goals set to the music from 'Gladiator'. Lucarelli took many questions from the audience before the seminar closed.

Dr Foot, co-organiser of the event, was extremely surprised at the turnout. "We had to turn people away," he said. The seminar was filmed by Italian state TV and Sky Italia, and appeared on the most-watched nightly Italian TV news programme. "Lucarelli had the audience in the palm of his hand," Dr Foot said. "I think it was an event unlike any other ever organised at UCL."

To find out more about Italian football culture, follow the links at the top of this article.