UCL today signed an agreement with Abbey, part of the Santander Group, under which the financial group will provide the university with international scholarships, extra-curricular awards, assistance in networking and project cooperation, and support in introducing smart card technology. 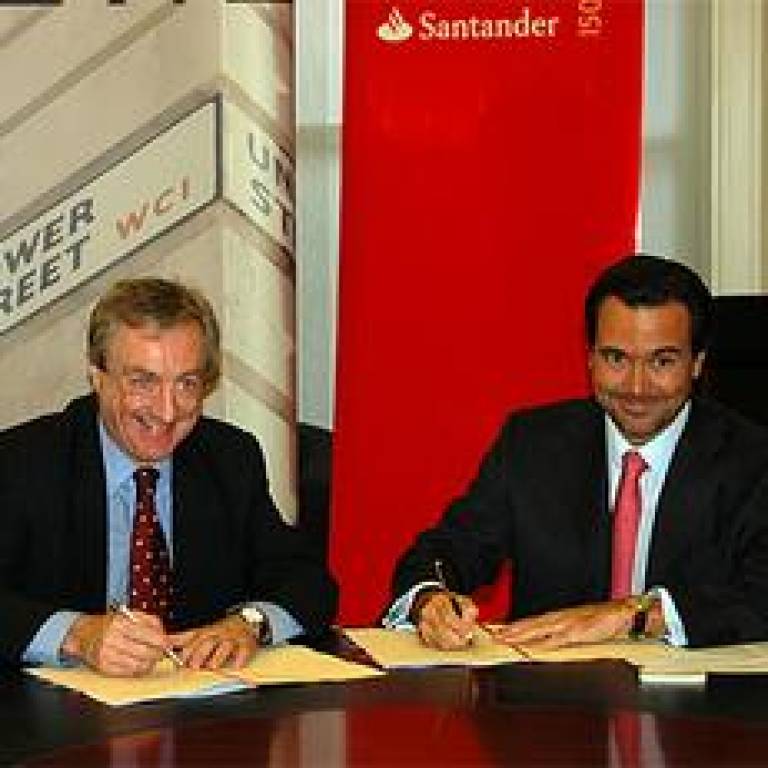 UCL is one of the first UK universities to work with the Santander Group, whose 'Santander Universities' scheme already supports over 500 universities across Spain, Portugal and Latin America. The agreement will provide support for awards to students for extra-curricular achievement; scholarships for postgraduate students from countries in the Santander Universities scheme to study at UCL; and scholarships for UCL students and staff to study or research in one of the ten countries within Santander's network.

In addition, the Santander Group will support UCL in introducing smart cards for the university community and in forging links with universities, government and academic institutions involved in the Santander Universities network.

Professor Michael Worton, Vice-Provost of UCL, said: "The concept of education for global citizenship and leadership has been a key element of strategic thinking at UCL for several years now. By focusing on global citizenship, we are emphasising an important aspect of our institutional culture that has often been under-emphasised as compared to our reputation for research and teaching excellence.

"Our partnership with Abbey and Santander is particularly important to us and marks the beginning of what will be, I am sure, a long-term and fruitful partnership, whereby we can attract bright students from the Iberian peninsula and Latin American countries to come and study at UCL and also encourage UCL students to study in those regions. The Abbey and Santander Scholarships will be enormously important in taking forward several other key UCL aims, and for UCL to be a member of the Santander Universities network will enable us to establish and take forward a variety of invaluable teaching and research initiatives on a global scale."

Abbey's Chief Executive, António Horta-Osório, said: "We are delighted to sign this agreement with UCL. Santander and Abbey share a single objective with the university sector: to contribute towards the development and prosperity of society. By working with a world-class university like UCL we will take another step forward in achieving this objective."

Professor Malcolm Grant, President and Provost of UCL, thanked everyone who had made the agreement possible, adding how impressed he was by the innovative nature of the Santander scheme. Abbey Chairman Lord Burns expressed the group's pleasure at forging an agreement with an outstanding academic institution with a truly international outlook and said that it was greatly looking forward to cooperating with UCL over the coming years.