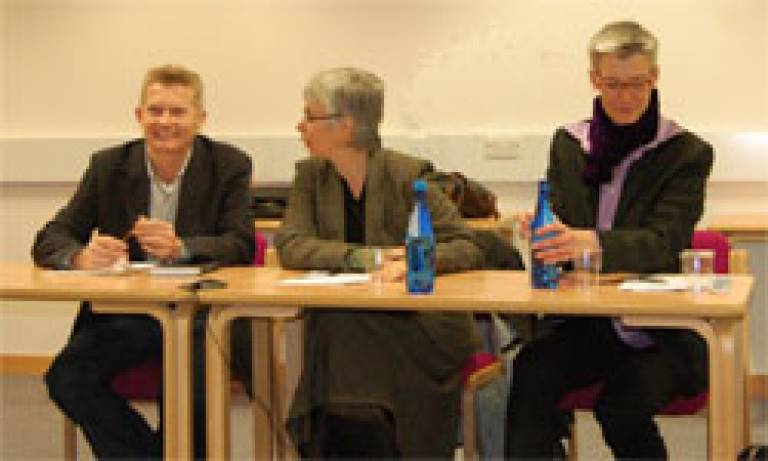 Organised by UCL Scandinavian Studies, as part of their Equality Action Planning initiatives, the seminar brought together two of Scandinavia's foremost experts on queer theory with gender studies expert, Professor Gabrielle Griffin (University of York), before a packed audience.

The seminar set out to explain the relationship between academic theory and political practice in the context of societies that are traditionally understood to be unusually liberal with regard to sexual orientation and gender equality, but where nonetheless such questions continue to generate debate.

It became clear from the outset that the Danish experience was far removed from that of the Swedish. Professor Dag Heede (University of Southern Denmark), a leading expert in the field of queer theory explained how he had caused a major scandal by 'queering' Danish national treasure Hans Christian Anderson, and how there was only one Gender Studies department in the whole of Denmark.

This was in contrast to Professor Tiina Rosenberg's (University of Lund, Sweden) experience. She explained how every university in Sweden had a thriving Gender Studies department and how queer theory was introduced to Sweden in the early 1990s. However, she cautioned that this may now change as the political climate had moved to the right and she feared they might end up with a situation like that of Denmark's.

Dr Mary Hilson, Head of UCL Scandinavian Studies, who introduced the seminar, said: "The Scandinavian countries are generally regarded as societies which are unusually open and tolerant in matters of sexual orientation, as well as being well-known for their gender equality. However, like most European countries, they are finding it challenging to accommodate traditional secular attitudes to matters like sexuality with the need for toleration of religion and the growing vociferousness of religious minority groups. This lively seminar looked at these issues head on."

To find out more about UCL's Equality Action Planning, use the link at the top of this article.