Award-winning architectural-urban designer and UCL Bartlett academic, CJ Lim, has made it to the final three in a competition to build a new eco-city in China. 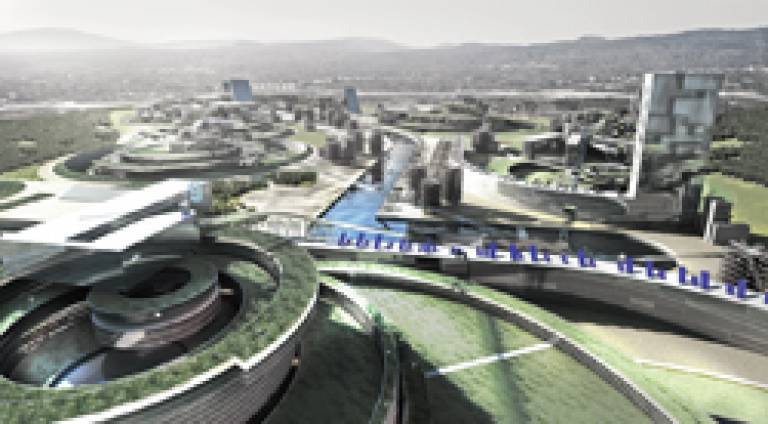 Lim has beaten off stiff competition from some of the world's largest and most prestigious firms to make it to this stage.

Seventy firms submitted entries for the competition in November 2006, which were then whittled down to five and now to three - the winner will be announced next week. The brief was to design and plan an environmentally-friendly city from scratch, in GuangMing, northwest of Shenzhen in the Guangdong Province of China. This competition is the second city-design competition in a plan by the Chinese government to create five new eco-cities.

The scale of the GuangMing project is enormous, with the proposed new town covering an area of 7.92 km2, or as Lim puts it: "The scale of the city is like walking from Shoreditch in East London to Swiss Cottage in North West London."

Currently, GuangMing is a fertile farming area that exports much of its produce to nearby Hong Kong. This focus on farming provided Lim with much of the inspiration for his competition entry and has resulted in a radical new approach to how our cities are designed and planned.

Instead of abandoning farming, Lim has incorporated it into the fabric of the city - lush grazing and arable land can be found on the roofs of the huge circular towers that make up the city. Additional land for crops is made available on a series of eighty vertical farms; 10m2 allotments cantilevered off a central spine and stacked one above the other like the branches of a giant tree, and dispersed throughout the city.

As a result, GuangMing - which Lim dubs the 'smart city' - is entirely self-sufficient. He explains: "A smart city integrates educational, agricultural, environmental, and most importantly, social sustainability into the heart of the city. GuangMing Smart-city is a city driven by the principles of slow living, emphasising a happy balance in life that is firmly rooted in the twenty-first century."

GuangMing is made up of twelve of these circular towers rings, which are effectively self-sufficient suburbs, each of which produces its own food and contains its own shops, schools, hospitals and offices to serve approximately 14,000 inhabitants. The idea behind this is to encourage people to stay in their own locale and to be environmentally efficient, although Centres of Excellence - each with its own special feature such as a museum, university or town hall - can be found in eight of the circular tower rings, so that inhabitants have the opportunity to travel to different centres at the weekend.

The infrastructure of GuangMing is just as environmentally friendly. It is a car-free city - the only transport found in GuangMing is via biogas buggies and a sky bus, both powered by processing human and animal waste. Electricity comes from a forest of solar panels found at ground level on a huge manmade beach, surrounding a series of waterways, which are both recreational and provide a cooling element to the hot, landlocked environment.

For all its radicalism, Lim's scheme is entirely practical and can be built. This is due in part to close collaboration with environmental consultants Fulcrum and leading engineering firms Techniker, and Alan Baxter Associates. The experience has been a massive undertaking for Lim and is an astonishing achievement. Lim says: "It's not like the usual competitions or research projects I have worked on and to work for the Chinese Government is very prestigious. But whilst it was great fun it was really exhausting and very challenging."

To find out more about CJ Lim, or to see more of his work, which is on show in group exhibitions at both the Royal Academy and the V&A, use the links at the top of this article.

Image 1: Farm land can be found on the roofs of the circular towers
Image 2: GuangMing Smart City would cover an area of 7.92 km2