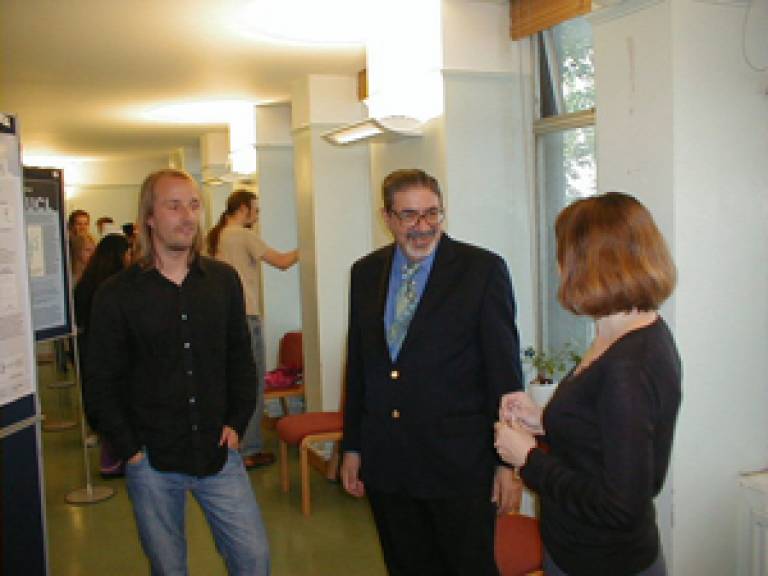 Professor Zare gave three lectures during his stay. On Tuesday he lectured on 'From Dust to Dust: Catching a Comet by the Tail' describing his participation in the NASA Stardust mission which intercepted the tail of a comet on the other side of the Sun and returned samples to Earth for analysis. The lecture, which was attended by academics, graduate students and undergraduates, discussed the experimental investigation of the composition of the dust particle impacts in the collection material, and the picture that is perhaps emerging that one has to consider very carefully the chemistry that occurs when the fast commetary particle is "trapped".

On Wednesday, Professor Zare lectured as part of a half-day symposium on 'Molecular dynamics and control' and described to a packed Chemistry Lecture Theatre what has been learnt in detailed experiments to study the precise mechanism of the reaction of a chlorine atom with a methane molecule. It is now apparent we understand the mechanism of this fundamental reaction in exquisite detail. At the same symposium, Professor Tim Softley from Oxford described his group's progress in studying the reactions of cold molecules and ions. The 'cold' reactants in these experiments are ions and molecules moving at speeds equivalent to -272 oC! Dr Beatrice Chatel from Toulouse then lectured on using shaped fast laser pulses to control the motion of the electrons in atoms and finally Professor Jon Marangos (Imperial) described how the phenomenon of High Harmonic Generation can be used to probe rapid molecular motions.

Finally, on Thursday, Professor Zare discussed how the technique of Surface Plasmon resonance spectroscopy can be used as a non-intrusive probe of processes occurring at interfaces. This physical technique has great potential as a rapid probe of molecular conformational changes and, in a more applied vein, the detection of biochemical markers. Professor Zare also attended the annual Chemistry Department postgraduate poster competition, where second-year PhD students present posters on their research projects, won this year by Dorian Parker. Professor Zare also managed to include visits to UCL Physics & Astronomy and the London Centre for Nanotechnology in his packed schedule.

UCL Chemistry is delighted that Professor Zare, the second Roberts Lecturer, has helped establish the goals of this lectureship, which aims to bring eminent academics to UCL Chemistry in order to give lectures on state-of-the-art research for graduate students and academic staff.

Such visits allow not just the education of graduate students, but also the sharing of scientific ideas and the stimulation of new collaborative projects.

Images: 1) Professor Richard Zare with Physical Chemistry poster prizewinner Dorian Parker and his supervisor Professor Helen Fielding 2) The return to Earth of the Stardust mission as seen from NASA's DC-8 Airborne Laboratory. The image shows the light emitted by the fireball caused when the capsule re-entered the atmosphere