A team of UCL particle physicists has set up experiments in Antarctica to detect some of the most elusive and energetic particles in the universe. 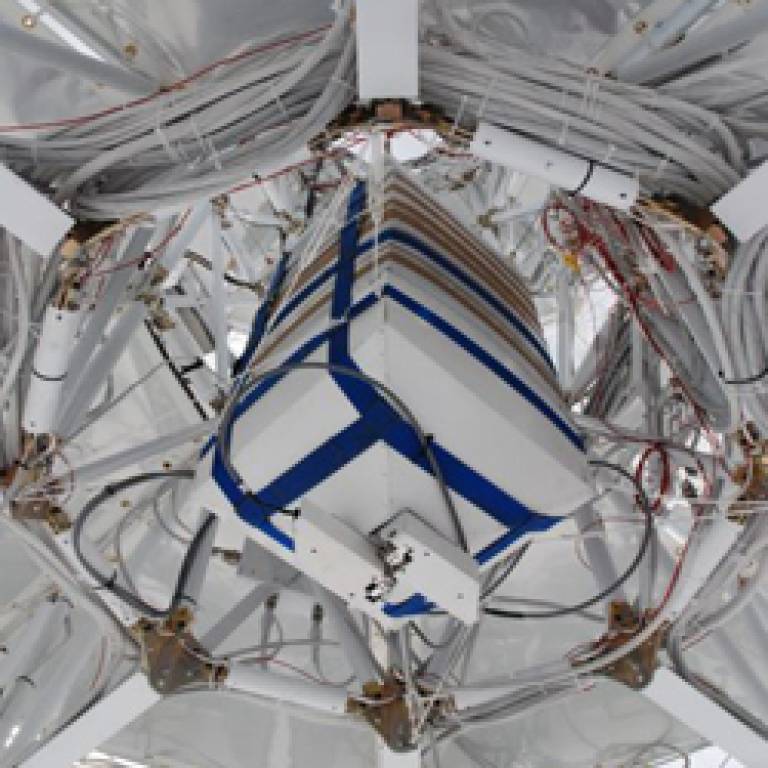 What are neutrinos?
Neutrinos are similar to electrons, but do not carry electric charge. Electromagnetic forces from planets or stars do not affect the electrically neutral neutrinos, so they can travel great distances without interacting with their surroundings. Although they are the second most abundant particle in the universe, very little is known about them because they very rarely collide with anything, which is essential for their detection.

Because they are so difficult to catch, a number of large scale experiments are being conducted at specialist particle physics laboratories - including Fermilab in the USA, CERN in Geneva and Super-Kamiokande in Japan- in order to study them in controlled environments.

Ultra-high energy neutrinos have energies over eight times greater in magnitude than what the largest particle accelerators on earth can achieve. Because they have greater energy, they are more likely to interact with their surroundings.

Where do they come from?
A great number of neutrinos were created at the time of the big bang, and it is believed that ultra-high energy neutrinos should hail from luminous and energetic sources across the universe.

The ANITA neutrino detector is the first device to attempt the identification of high-energy neutrinos created by collisions between cosmic rays and cosmic microwave photons in space. Studying neutrinos from these sources offers an unprecedented opportunity to learn about exotic objects at the edge of the universe, such as active galactic nuclei.

How does ANITA detect neutrinos?
Neutrino detectors search for evidence that a neutrino has interacted with a material, in ANITA's case, Cherenkov radio pulses. When neutrinos collide with something, they produce cascades of particles. The charged particles in these cascades produce Cherenkov radiation, a short flash of light. ANITA scans the vast expanses of ice for telltale pulses of radio emission generated by neutrino collisions.

ANITA's maiden flight in December 2006 lasted for 35 days circling the Antarctic continent at 115,000 feet. Unfortunately, the winds blew the balloon over the shallow ice of western Antarctica, rather the preferred deep ice in the east. During that time, it collected more than eight million triggered events. Dr Nichol said: "Our simulations predict that at best only a few may be neutrinos, the remainder being either thermal fluctuations in the antennas or anthropogenic radio noise from the inhabited base camps across Antarctica. Our task right now is to develop our analysis tools so that we can reject all these millions of background events without throwing away those few neutrino events we may have recorded."

The second ANITA flight is due for 2008, and the team is working to ensure that fewer background events are recorded and pushing the neutrino energy threshold lower to where the flux of neutrinos is greater.

Dr Nichol added: "There are several other experiments, current or in the pipeline, looking at these ultra-high energy neutrinos. We hope that through data from the first flight and with the improvements for the second, we will be the first to actually detect them. It will add a critical piece to the jigsaw puzzle that is our knowledge of the most energetic objects in the universe, and pave the way for a future generation of neutrino astronomy facilities that could be used to help answer questions across the fields of astronomy, astrophysics and particle physics."