Atmospheric research from the top of the world

Scientists from UCL Physics &amp; Astronomy returned last month from Svalbard, a Norwegian island in the high Arctic (78 degrees north), where they installed a new instrument at the Adventdalen Observatory, Longyearbyen. 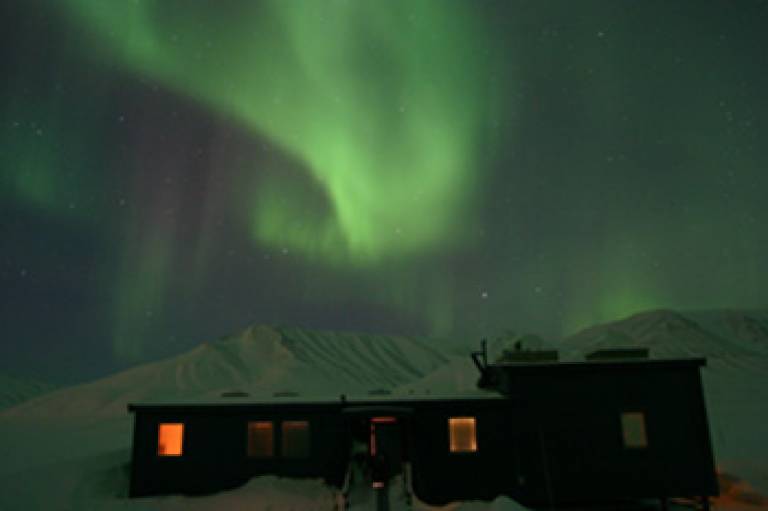 Four members of the Atmospheric Physics Laboratory - Dr Ian McWhirter, Dr Andy Charalambous, Dr Eoghan Griffin and Ms Iris Yiu - travelled to the remote location (a 90-minute flight north from Tromsø, which is itself at the very top of mainland Norway), to install and begin taking readings from the Scanning Doppler Imager (SCANDI), a new device that captures and analyses light generated by atoms in the upper atmosphere. By observing the auroral emissions from atomic oxygen, the new instrument will provide a 'weather map' of winds and temperatures over an area 1000km in diameter at an altitude of 240km. The device takes images at intervals of one minute, helping atmospheric physicists to understand the dynamics of the upper atmosphere.

Sunlight obscures the auroral emissions, but data can be taken continuously during the perpetual darkness of winter in the far north. The UCL Atmospheric Physics Laboratory has instruments placed across northern Scandinavia and members of the team have been travelling to the region at least once a year for 25 years.

Studies of charged atoms (ions) in the ionosphere can be made using radar but the neutral atoms which form the bulk of the atmosphere at high altitude can only be measured directly by optical methods or by satellite drag. Radar observations infer neutral winds and temperatures from the behaviour of the ions by making assumptions about the way the two types of particles interact. The data from SCANDI will provide new insights into this neutral-ion interaction, particularly with respect to meso-scale structure (with distance and time scales of tens of kilometres and minutes). Complex computer models of how the upper atmosphere behaves have been developed, both at the UCL Atmospheric Physics Laboratory and elsewhere. It is believed that the information obtained by SCANDI will help to validate and improve these models.

SCANDI is an advanced scanning Fabry-Perot interferometer. It uses an optical interference device known as a capacitance-stabilised Fabry-Perot etalon (CSE), developed by the Atmospheric Physics Laboratory.  Building on the technology of previous instruments, Dr McWhirter designed and developed the CSE and the complex optics, while Dr Charalambous was responsible for the mechanical design of the new, highly stable, optical assembly required for the instrument. Much of the fabrication was done by the UCL Mathematical & Physical Sciences workshop.

Whereas earlier interferometers observed only a single patch of sky, SCANDI incorporates an 'all-sky' imager, using a fish-eye lens, so that it can take readings across the whole sky - significantly increasing the volume of data obtained. At the base of the instrument is a state-of-the-art electron-multiplying charge coupled device (EMCCD), supplied by a UK company, Andor Technology. This is one of a new generation of highly sensitive digital cameras which are capable of recording individual photons of light. It is used to record the circular interference fringes produced by the etalon, which have an extremely low intensity. It is these fringes which, when analysed, yield the speed and temperature of the atoms that emitted the light. The instrument is fully computer controlled and runs automatically, but it can also be operated remotely from UCL via the internet.

To find out more, follow the link at the bottom of this article.

Image: The Auroral Observatory at Adventdalen, near Longyearbyen, Svalbard. SCANDI is mounted under the dome on the extreme left of the building. Overhead is an unusually fine aurora. (Credit: Dr Anastasia Stockton-Chalk)