Lausanne, Switzerland, is a small city in the Vaudoise region of Switzerland, known to many only for its access to the beauty of Lake Geneva, and skiing opportunities in the Swiss Alps. 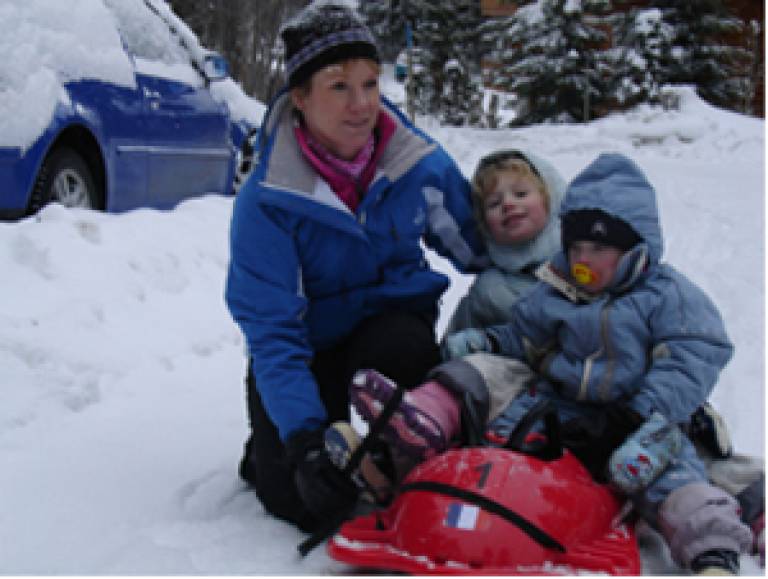 An expert on neonatal neurology - the study of the infant brain - Dr Robertson proved an ideal candidate for Lausanne's Universities of the Capitals of Europe (UNICA) Invited Chair in Neonatology. UCL is the only UK university participating in the UNICA scheme, which was set up to promote academic excellence, integration and cooperation between its 41 member universities throughout Europe.

Funding for this post in the neonatology department at the Centre Hospitalier Universitaire Vaudois (CHUV), the central university hospital of the Vaudoise region, was granted from the City of Lausanne.

In addition to her own expertise in neonatal neurology, neuroscience and neuroprotection - the ability of the nervous system to defend itself against degeneration, typically following brain injury or degenerative disease - Dr Robertson was also able to offer the hospital an unbeatable two-for-one offer. Her husband, Dr Dominique Acolet, is an expert in perinatal epidemiology, the study of disease in infants.

So Dr Robertson arranged to share the post, and was able to transfer the whole family to her temporary home: an apartment just two minutes away from the hospital and laboratory.

The neonatal unit at CHUV is a Level III perinatal centre, caring for high risk and very ill babies. As at UCLH, demand on services is high: UCLH's Neonatal Unit has a delivery rate of 5,000 a year with thousands of additional referrals, while the unit at CHUV deals with around 12,000 births per year.

CHUV also deals with an additional challenge - the mountainous terrain of the surrounding region means that patients often have to reach the hospital by air. Dr Robertson says: "There is a very busy retrieval service running at all times of the day, so we were never far from the sound of helicopters."

Nearly half the emergency cases are ski injuries arriving from the mountains, and around 10-15 per cent are neonatal referrals coming from outlying hospitals, private clinics and birthing centres. Dr Robertson says meetings and ward rounds are run with impeccable timing - "an example of extreme Swiss precision!"

During her time at CHUV, Dr Robertson enjoyed the opportunity to take an active role in teaching and to inject some enthusiasm for new research: "Although there is a strong tradition of research at the hospital, in practice there is very little time for research activity. And there are no dedicated re

search academics." She was able to advise colleagues on both diagnosis and treatment of neurological problems in neonates, including the latest thinking on how to interpret evidence from MRI (Magnetic Resonance Imaging) and ultrasound scans.

She is perhaps most proud of introducing to hospital staff a pioneering new treatment for a common disorder in newborn babies: perinatal asphyxia. The term literally means lack of oxygen during birth. It occurs in approximately six in every 1,000 full-term live births, and accounts for a good deal of neonatal admissions. Asphyxia is the most prominent cause of acute neurologic injury in newborns, causing anything from mild cognitive impairment to disabling conditions such as cerebral palsy.

However, new evidence suggests that the worst effects of asphyxia can be avoided by a surprisingly simple action: cooling down the baby.

Dr Robertson, who is leading the establishment of cooling as a new standard of care at UCLH, explains: "Recent research has shown that cooling babies with asphyxia by 3-4 degrees for three days after birth can prevent brain cell death. There are several ways to do it: for example, by using a cold water cap around the head, or a mattress with circulating coolant."

Dr Robertson and her team at the UCL Elizabeth Garrett Anderson Institute for Women's Health are using new temperature-mapping methods to learn more about how cooling works, and hope to find out which babies the treatment will be the most useful for. They are also working with colleagues in Uganda, looking at 'lo-tech' methods of cooling which could be used to introduce the treatment in the developing world.

At CHUV, Dr Robertson gave seminars and ran discussion groups to educate staff on the evidence for cooling, and was able to suggest how it could be introduced in a safe and systematic way.

The change in routine that accompanies a sabbatical can be too disruptive for some, but when Dr Robertson arrived back in London she found that life quickly picked up where it left off.

She would thoroughly recommend the experience for those who are keen to gain a new perspective on their work and experience a different way of life: "It was a tremendous opportunity to think, read and gain strength to pursue life with renewed vigour. Meeting and collaborating with colleagues from another country allowed me to reflect on many of our practices and preconceived ideas and to see how very different methods can give the same outcome."

In fact, Dr Robertson is of the opinion that the six months she spent there was not quite long enough: "Initially we found Swiss society quite rigid and close-knit society, but when we were further into our stay we experienced some fantastic hospitality and made some very loyal and wonderful friends."

Another advantage of spending time away can be to highlight the good points of home, and although she thoroughly enjoyed her time in Lausanne, Dr Robertson admits she is very glad to be back: "It is much easier for women to rise through the ranks here - the high expense of childcare and the demanding working hours make it difficult in Switzerland. The whole experience has made me really appreciate the lack of hierarchy and strong tradition of debate that we have at UCL."

The sabbatical has also caused Dr Robertson to develop a new appreciation of the convenience of London life: "On the whole I would say I found my time in Lausanne extremely rewarding and refreshing. But I am thoroughly enjoying being able to shop for groceries on a Sunday again!"

Find out more about the UCL Elizabeth Garrett Anderson Institute for Women's Health.