Jane Humphris and John Giblin, PhD students at UCL, have spent the past six months in Rwanda, carrying out the first international archaeological project in the country since the 1994 genocide. 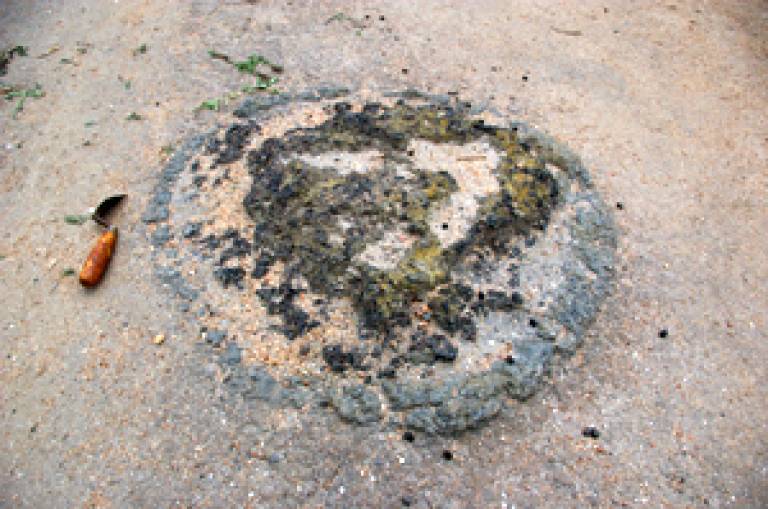 Here they describe how, thirteen years on, its aftershock still reverberates through every aspect of daily life - and how digging up the past can ease future tensions.

There is one professional archaeologist in the entire country. Professor Celestin Kanimba runs the National Museum at Butare, and works closely with Jane and John. The paucity of human resources belies a wealth of archaeology. The country has some of the earliest evidence for iron production in the world and its early ceramics have greatly influenced African archaeology. Jane is re-examining iron technologies in Southern Rwanda while John is researching regional differences in Iron Age Rwanda by studying ceramics and economic activity in Butare, Gitarama in central Rwanda and Ruhengeri in the north.

Underlying the desire to explore this uncharted intellectual territory was a drive to put the humanitarian nature of archaeology to use, providing an alternative history to the largely European written accounts that have caused unrest since colonial times. Through archaeology, the students aim to develop fresh versions of the past that counter genocidal ideologies and instead focus on collaboration, interaction and achievement.

An alternative history
"Many Rwandans have been led to think that the Europeans brought science and technology to Rwanda as a result of European propaganda in colonial times. Our research shows people that that's not the case. It can take a lot to convince people, but having something tangible to show them, such as the remains of a smelting furnace, makes them reconsider," says Jane. "This work is important because through archaeology it's possible to see beyond the colonial concepts and ethnic ideologies that have clouded much of the historical debate as to the region's past."

John agrees. "I believe that our work excavating previously unexamined sites in rural areas can extend people's understanding of their immediate surroundings, and build greater pride and knowledge in their past."

It's a view that the Rwandan government also subscribes to. The polarised perceptions of history that promoted racist and divisive principles eventually provided the ideological basis for genocide, leading the government to take the drastic action to 'stop history', suspending the teaching of history in secondary schools in 1995. In recent years, however, the government has recognised the need to reconstruct the history of Rwanda and to teach children about unifying historical forces in the country.

A true partnership
Jane and John have been received warmly by Professor Kanimba, with whom they are working in partnership on national research priorities. But their engagement with Rwandan society goes much further than that. Their research teams involve students and staff from the National University of Rwanda and the Rwanda National Museum, as well as some from the British Institute in Eastern Africa, US volunteers and UCL archaeology undergraduates.

John also looks to local knowledge to inform his survey strategy, interviewing people who might be able to lead him to promising sites. Both students are keen to involve Rwandans throughout their projects. They keep the academic community abreast of developments through articles in the Museum's monthly journal, but Jane also invites anyone who is interested to come along and find out what and why she is researching before starting work at each site. John has secured funding to make a documentary film of their digs and subsequent workshops with local communities, which it is hoped the Rwandan Ministry of Education will distribute to schools.

Going the distance
Day-to-day excavations are subject to some unique challenges. Every week each district shuts down for an entire day for gacacas - ongoing trials related to the genocide. Jane has found that negotiations about digging on private land are mainly carried out with women, who lead a high proportion of households, given the loss of men to conflict or prison.

"When people ask you how your family is, it's natural to ask them about theirs too. It takes a while but I've learned to be more careful about doing that." As Jane says, everyone in Rwanda today is a survivor, each with their own tales of loss due to the genocide that saw the slaughter of over 800,000 people.

Despite the sensitive nature of their work, Jane and John have been made very welcome. Professor Kanimba has asked them to provide further training for would-be archaeologists, and over intensive digs lasting up to four weeks each, they have found they can build a mutual respect with their local colleagues in spite of limited language skills.

Such a reception has deepened the students' desire to continue work in Rwanda. Jane is looking forward to revisiting dig sites to share her findings with people who took part in the project. She also hopes to expand the area of excavation and teach at the National University of Butare. John would like to support the Director of the National Museum in his plans to set up a Centre of Archaeology in Rwanda. He sums up their commitment:

"Archaeology has to have social aims. The past has been so distorted in Rwanda that the only way to access it is through oral traditions and archaeology. If we don't make archaeology perform a service, we are underestimating its potential."

Image 1: Jane Humphris excavated the remains of this Kingdom Era furnace at Cyamakuza
Image 2: Clothes of genocide victims from a mass grave form the Murambi Memorial in Gikongoro, southern Rwanda