UCL has become a signatory to the Magna Charta Universitatum, a statement of the principles and values shared by the oldest and most prestigious universities in the world. 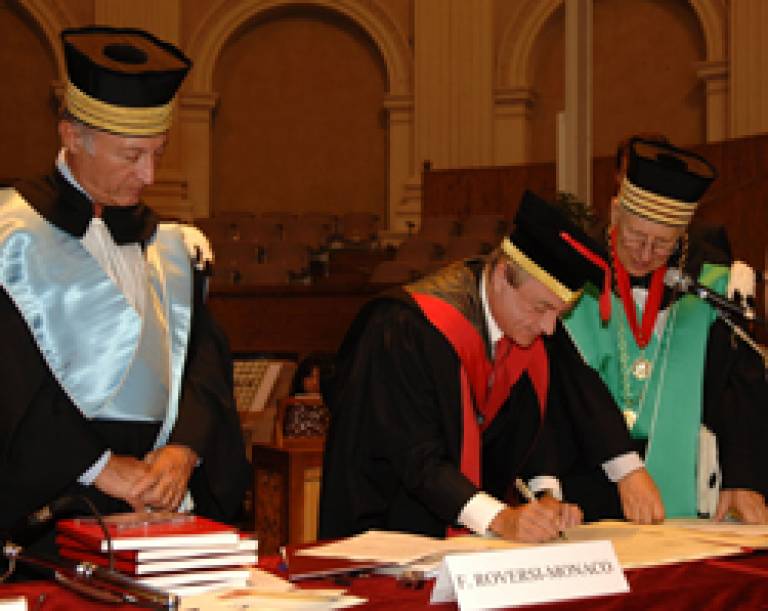 The document was drafted by a small group of European rectors and vice-chancellors under the leadership of the President of the Association of European Universities, and the opportunity to sign up to the statement and the principles it contains has since been extended to research-led universities across the world.

Professor Michael Worton, UCL Vice-Provost (Academic & International), represented UCL at the signing ceremony, which took place in Bologna on 15 September 2006. The signing was preceded by a one-day conference on Political Approaches to University Identity, prepared in conjunction with the Council of Europe.

Professor Worton said: "Signing the Magna Charta Universitatum means much more than UCL restating very publicly its commitment to key principles: it involves us in an ever-growing network of universities, notably in Europe, but also from across the globe. UCL is particularly keen to work with central and eastern European universities as they seek greater institutional autonomy."

Signature of the charter is a public statement of an institution's commitment to four key principles:

In order to be accepted as a signatory, institutions must adhere to the following precepts:

Signature of the Charta also affords UCL access to the Magna Charta Observatory, a European lobbying organisation on higher education policy, based in Bologna.

To find out more about the Magna Charta and the Observatory, or UCL's links with Europe, use the links at the bottom of this article.