Dr Alena Ledeneva, Reader of Russian Politics and Society at the UCL School of Slavonic and East European Studies, last week attended the annual meeting of the Valdai Discussion Club. 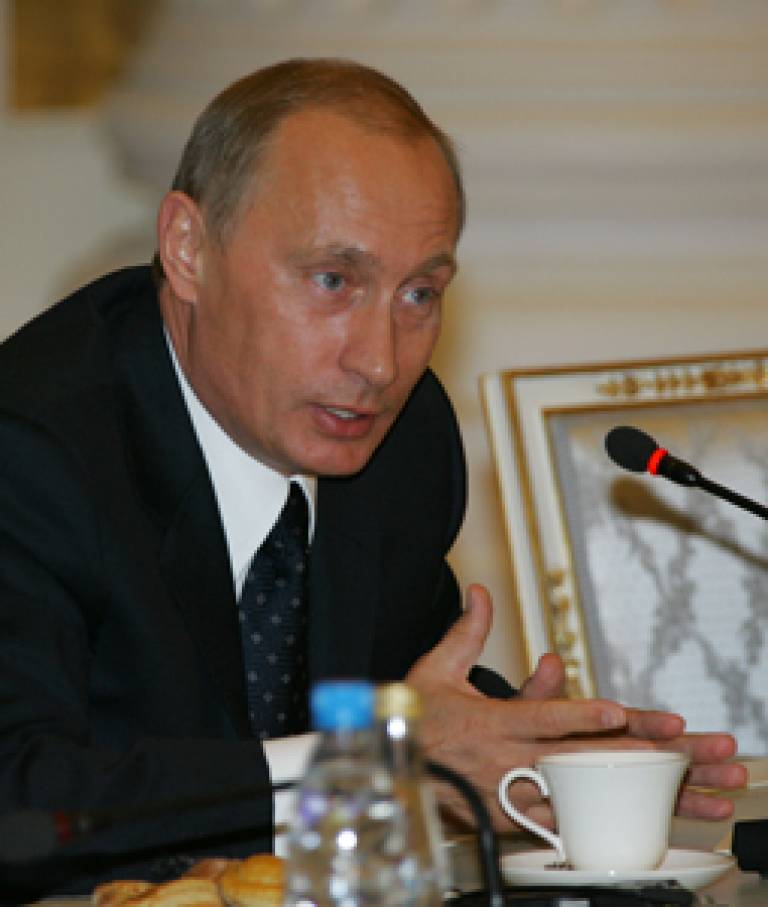 The Valdai club is an annual gathering of 30-40 international experts and journalists who are invited to attend a series of presentations, discussions and meetings with leading Russian politicians and industrialists. This year was the third year that the club has met, and the second time that Dr Ledeneva has attended. Organised by the Russian state information agency, RIA Novosti, the meeting's objective is to acquaint opinion-formers with the country's achievements, and to provide a platform for the Russian government and experts to communicate their messages to the West. The belief among Russia's leadership is that press coverage in the West focuses only on problems in Russia, and ignores some of the progress being made by the country, such as the repayment of international debt and tackling poverty.

High on this year's agenda was the question of Russia's so-called 'energy superpower' status - a term the Russian government argues has too many associations with the former Soviet Union. Disputes with Ukraine over the price of exported gas flared up earlier this year when Gazprom, the Russian oil and gas company, cut down supplies of gas flowing through a pipeline to Ukraine, insisting that former Soviet Republics should pay market prices. This abrupt end to subsidised energy raised widespread criticism in the West, with many commentators interpreting the move as politically motivated following the Ukrainian 'Orange Revolution' and election of Victor Yushchenko, a pro-Western leader.

President Vladimir Putin explained his position on the matter at a dinner with the Valdai group at the end of the five-day meeting. He pointed out the dangers of being trapped in the terminology of the past, such as the word 'superpower', and argued that the move to charge Ukraine more for gas was purely economic. Russia had subsidised its neighbour to the value of billions of roubles over the preceding 15 years by not charging market prices.

The vexed question of energy security - a major concern for many countries in western Europe that rely on imported gas - runs both ways, said Putin, and security of demand is as important as security of supply. He also stated that, while it was an aim to increase the export of Russian oil and gas to Asia from 3 to 15 per cent, almost all the existing pipelines flow westwards, and European countries can safely rely on supplies of 70 per cent of Russia's output in future.

Such access to a world leader is very rare, said Dr Ledeneva: "The dinner with Vladimir Putin is a great opportunity for the members of the club to raise issues of concern with the President. It lasted three hours, which is a lot of presidential time, and we were able to speak freely with him. Last year, there was a strong intellectual edge to the conversations, with some tough questions about issues such as Chechnya, human rights, the status of non-governmental organisations in Russia, domestic politics and foreign policy in relation to the former Soviet states. I think he enjoyed the challenge of these discussions."

However, this year Putin was not questioned as aggressively, said Dr Ledeneva: "I felt a little disappointed by the somewhat muted tone of questions this year. The dinner setting put all the participants at ease and was less suitable for sharp discussions."

Putin attributed his skill as a communicator and politician to his assertion that he is "not a politician". Rather, he claimed to be a "citizen", explaining that his background is not that of a career politician, but that he is driven by the needs of his fellow Russians. He emphasised that not clinging to power is crucial for long-term decision-making. But, as Dr Ledeneva pointed out: "Such discourse of a 'man of the people' has a lot in common with the populism of other world leaders."

Some of Putin's recent speeches have been interpreted as those of an outgoing president, reflecting on his six years in office and openly discussing the challenges facing his successor. Whoever is in charge of Russia after 2008, the country's role as a growing world power will continue to make it a source of fascination for academics and journalists alike.

To find out more, use the links at the bottom of this article or in the right-hand menu.