ICH maternal health study in Malawi presented in 'The Lancet'

A paper on maternal health in Malawi by academics at the International Perinatal Care Unit, part of the UCL Institute of Child Health, is published as part of the 'Lancet' Maternal Survival Series, which was launched today. 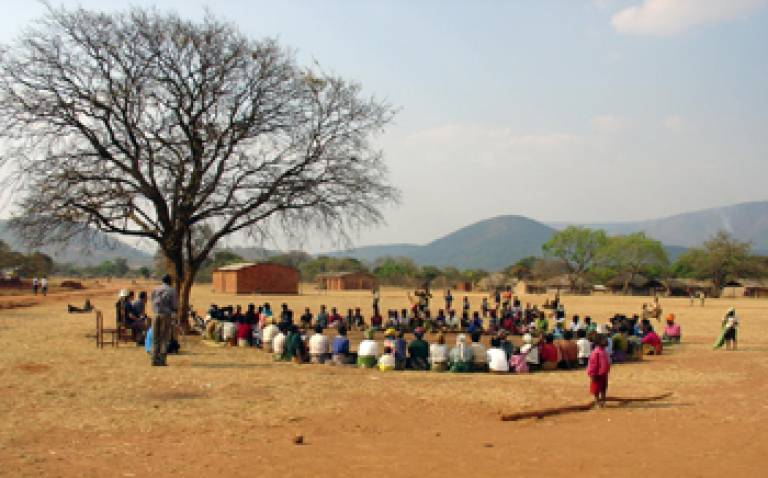 The report, produced in collaboration with Malawian colleagues on the Maimwana project, is entitled 'Women's groups' perceptions of maternal health issues in rural Malawi'. Looking at how women's groups in Mchinji district identified and prioritised maternal health problems, it found that the groups have a developed awareness of maternal health problems and are motivated to address them. Surveys have indicated that individual women in Malawi have a poor awareness of such issues, so the report's authors conclude that community groups such as women's groups may help to improve indices such as maternal mortality by drawing on a collective ability to solve problems.

Professor Anthony Costello, one of the principal investigators said: "We believe that women's groups have great potential for bringing about change even in the poorest and most remote communities. This paper describes the first part of a larger randomised controlled trial to assess the impact of women's groups on maternal and newborn mortality. We hope to publish the results of the trial in the next 18 months."

Malawi is one of the poorest countries in the world and has a maternal mortality rate of almost 1 per cent (984 deaths per 100,000 live births). This is compared to just one in 30,000 women who die from causes related to pregnancy in Sweden. The report points out that in the local Chichewa language, the words used to describe pregnant women are 'pakati', meaning 'between life and death', and 'matenda', meaning 'sick'.

The leading maternal health problems identified among a population of 3171 women across 172 women's groups in Mchinji district were anaemia (present in 87 per cent of the groups), malaria (80 per cent), retained placenta (77 per cent) and obstructed labour (76 per cent). HIV/AIDS was found much less frequently, despite the virus's endemic proportions in Malawi. The researchers state that this was probably due to the condition's complexity and contextual factors.

The 'Lancet' Maternal Survival Series follows similar series of articles published on the deaths of children under the age of five, on neonatal deaths (during the first four weeks of life) and on child survival. The aim of these series is to present strategies for combating the inequalities in health outcomes for mothers and children around the world.