UCL's cloisters were transformed into an Egyptian souk for the day on 16 September 2006 for 'Egyptomania Fantasia', a fundraising gala for the new UCL Institute for Cultural Heritage. 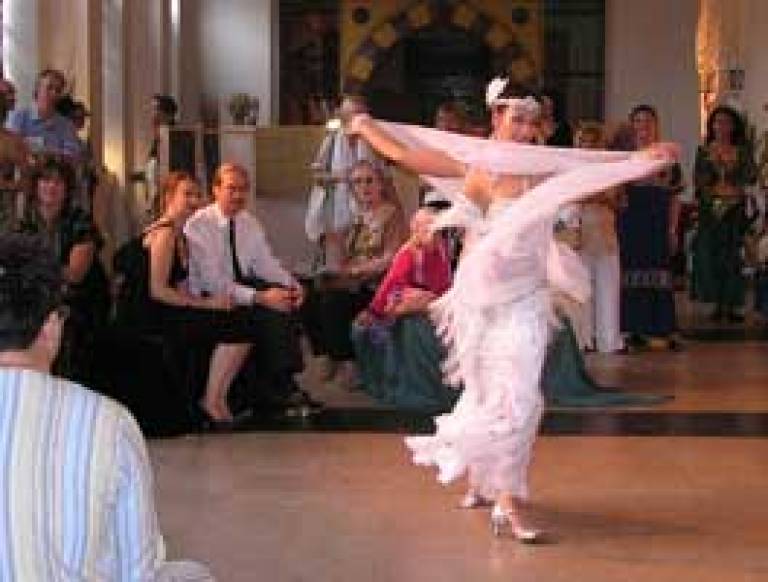 Organised by the Friends of the UCL Petrie Museum of Egyptian Archaeology, the celebration of Egypt, ancient and modern, was a festival of Egyptian food and culture, art and performance. Commencing with an afternoon spectacle of music, song and dance performances, readings of Egyptian tales, a display of replica costumes and exhibitions.

As dusk fell over the Nile, guests were served a feast of Middle Eastern delicacies, with each table hosted by an Egyptologist. Dr Barbara Mertz, author of the Amelia Peabody books, was a guest speaker followed by the grand finale - an auction of art and Egyptomania items, including donated works by Bridget Riley and Tracey Emin.

The dress code for the event was 'Egypt 4000BC to the present' and high priestesses mingled with pharoahs. Lisette Petrie, granddaughter of Flinders Petrie- creator of UCL's Egyptian collection - wore a traditional bedouin dress that belonged to her grandmother, Hilda Petrie.

Dr Sally MacDonald, Director of the UCL Museums & Collections, attended the occasion as Lynette Doyle from Agatha Christie's 'Death on the Nile'. She said: "Over the next four years we will be constructing the new Institute for Cultural Heritage, which - as well as housing some of UCL's most significant collections - will act as a public laboratory for some of these ideas. It's a tremendously exciting time."

Professor Michael Worton, UCL Vice-Provost (Academic & International) cracked his whip as daring archaeologist Indiana Jones. He said: "We have Jewish, Christian and Islamic art here, and we want to stress how these different cultures can exist in harmony."

The event was part of the fundraising campaign to raise £26million for the UCL Institute for Cultural Heritage, a major new building for London, which will house UCL's extensive Art Collections, Library Special Collections, Galton Collection and the UCL Petrie Museum of Egyptian Archaeology.

Open to the public, the new institute will be a vibrant forum for teaching, research, conservation and innovation in the broad field of cultural heritage, as well as providing state-of-the-art display, storage and study areas for UCL's collections, which include art by the old masters, medieval manuscripts and the largest collection of Egyptian artefacts outside of Egypt.

Image 1: Belly dancer in the souk

Image 2: The Octagon became a temple where Anubis performed the embalming ritual over Osiris