Planetary scientists in UCL's Mullard Space Science Laboratory (MSSL) have been studying data from the Cassini-Huygens spacecraft mission to Saturn and its moon, Titan. 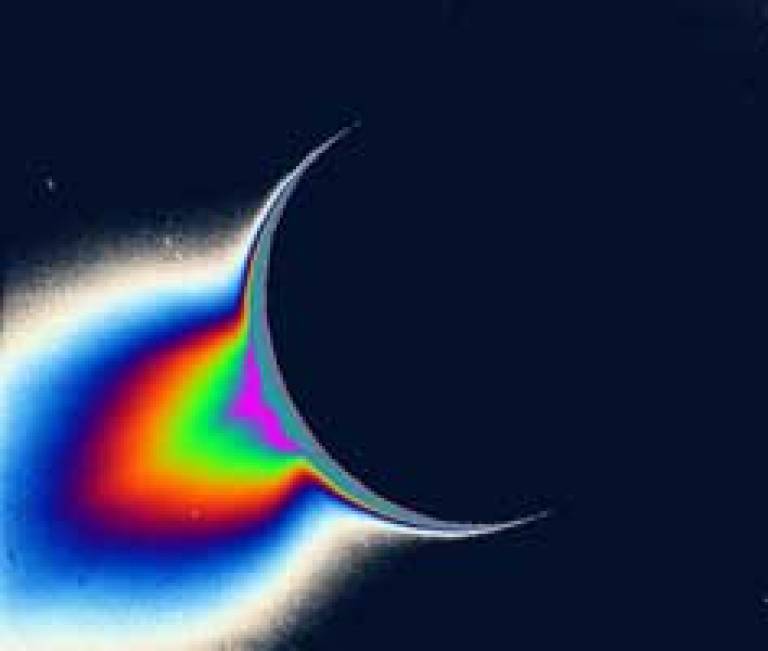 Cassini is returning amazing detail and stunning images of Saturn, its rings and moons, and investigators are learning vast amounts about this giant planet.

Launched in 1997, the US/ European mission includes a four-year (2004-2008) detailed exploration of the Saturnian system. The magnetosphere of Saturn is the most complex in the solar system and includes several unique features - large quantities of dust, particularly in the ring plane, icy satellites and Saturn's largest moon, Titan, with its appreciable atmosphere.

Cassini is the expedition's orbiter craft, and Huygens the lander craft, which descended through Titan's atmosphere and has remained on the planet's surface since landing in January 2005. The orbiter has already made over 70 revolutions of Saturn, including 45 Titan encounters, along with targeted icy satellite flybys of Enceladus, Dione, Rhea and Iapetus at altitudes of 1000 km or less. This allowed a detailed exploration of Saturn's magnetosphere by the orbiter plasma instruments, including the plasma interaction with the rings, with Titan and with the icy satellites.

Cassini carries an electron spectrometer instrument, designed and built at MSSL, which is also lead Co-Investigator on the project.

Dr Andrew Coates (UCL MSSL), Head of the UCL MSSL Planetary Science Group, said: "The spacecraft flew past Earth in August 1999 and Jupiter in December 2000 on its way to Saturn. At Earth, we took a 'snapshot' of the Earth's magnetosphere during this very fast flyby, while at Jupiter we gathered some exciting data on Jupiter's plasma environment and the causes of Jupiter's aurora. We measured the solar wind between Jupiter and Saturn, and since 1 July 2004, Cassini has been in Saturn orbit. Already we have excellent data on Saturn's magnetosphere including plasma near the rings and interaction with Titan and with the icy satellites."

In 2005, Dr Coates led a study on the plasma environment of the rings as Cassini flew the closest to the rings that it has been during the entire mission. The resulting paper was a key element in the discovery that the rings have their own atmosphere and ionosphere. Dr Coates said: "The new studies released this week show some stunning views of the backlit ring system. The new ring was discovered co-orbiting with Janus and Epimetheus, and meteoroid impacts feed this ring. The images all confirm our solar system as a beautiful and complex place, our place in the Universe, which we are striving to understand."

Cassini has also returned some stunning images of the region near Enceladus. This moon is dramatically seen feeding the E-ring with dust. Last year the Cassini instruments discovered plumes of gas and dust emanating from the 'tiger stripes' on Enceladus. This followed the discovery by field and plasma instruments of a magnetic field and plasma flow structure around the moon, indicating a large amount of gas being dumped into its near environment by this enigmatic moon. Dr Coates' team contributed to a study in 'Science' magazine earlier this year on this phenomenon, where a density increase was detected using the MSSL-built electron spectrometer.

"Now, we realise that icy Enceladus must have liquid water under, but near, the surface to feed this activity, joining the Earth and Europa as the only places in the solar system where we know liquid water exists now," said Dr Coates. "This is exciting, and establishes Enceladus as an interesting astrobiological target - the tiger stripe region is also hydrocarbon rich, and we hope to get further close looks at Enceladus with Cassini in the coming years."

The third discovery highlighted recently is the re-emergence of spokes in Saturn's rings. "These ghostly features, first seen by Voyager, depend on the extent to which the rings are sunlit and so vary with Saturn's seasons," explained Dr Coates. "Early in the mission they were absent, now the rings are more closed and they are there again, and it is thought that the plasma environment plays a key role in their formation. We look forward to getting close to the rings again with our electron spectrometer to study the process in detail."

On 26 September, radar images of lakes on Titan's frigid surface (-180 degrees C) were released from the flyby three days earlier. Dr Coates said: "This is another exciting discovery as we know from Cassini-Huygens that methane has played a major role in shaping the surface, producing river channels reminiscent of those on Earth, but the ones seen from Huygens were dry. We are also working on results on Titan's interaction with Saturn's magnetosphere from our electron spectrometer during Cassini's flybys of Titan."

Image 1: Enceladus backlit by the sun show the fountain-like sources of the fine spray of material that towers over the south-polar region

Image 3: With Titan's colder temperatures and hydrocarbon-rich atmosphere, these lakes likely contain a combination of methane and ethane, not water