UCL astrochemists have collaborated with colleagues from around the UK to create the immensely popular exhibition 'Stars 'R' Us', encouraging the public to engage with the inspirational science behind planet and star formation. 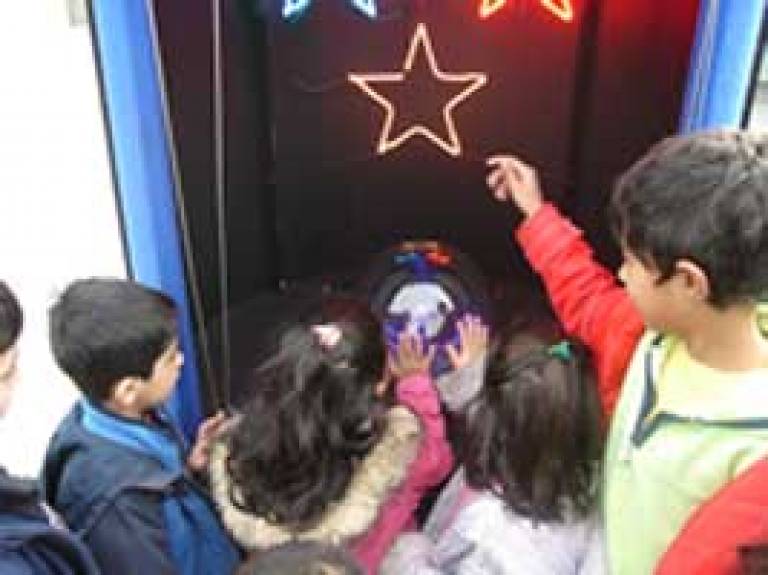 For millennia, mankind has been looking to the heavens, peering into the immense depths of space. From these observations, we have built up a detailed picture of the structure and evolution of stars, galaxies and of the universe itself.

Our universe is rich in atoms, from the primordial light atoms created in the big bang to the heavier atoms in the periodic table - synthesised by stars since that cataclysmic event. Indeed, the very atoms we are made of were forged in the nuclear furnaces of stars.

Around eighty years ago, with the gradual development of technology such as spectroscopy and radio astronomy, the interstellar atmosphere was found to be abundant in molecules, ranging from molecular hydrogen - the most abundant of all molecules - through to water, methanol, ethanol, and maybe even the building blocks of life on Earth - amino acids.

Later came the realisation that the star-forming regions of space are also rich in more complex molecules. However, the conditions in space are not conducive to the formation of molecules, so this is where astronomers, chemists and physicists come together to discover how these reactions take place light years from Earth, and explain the origin of the chemical complexity that can be found throughout the cosmos.

In 2004, at the Royal Society Summer Exhibition - the leading showcase for science in the UK - a consortium of scientists from UCL, the University of Nottingham, the Open University and the Leiden Observatory, got together with the Royal Observatory Greenwich to create 'Stars 'R' Us', an exhibition to explain the importance of this exciting area of science to the public.

"First of all, we told a story that focuses on the star cycle and the chemistry that controls this process," says Dr Serena Viti (UCL Physics & Astronomy). "The first part describes how stars form vast clouds of gas and dust and how the cosmos evolves through a continuous cycle of star birth, life and death, stressing how chemistry plays a crucial role in controlling the star cycle."

Four hands-on exhibits complement the explanatory posters so that visitors can experience first-hand how some of the science works. In the first, 'Seeing Stars' illustrates how visible spectroscopy allows scientists to detect atoms and molecules in stars. A number of glass 'stars' are filled with different gases, and visitors have to guess which gas is inside each star. "The visitors were amazed that it was possible to identify different elements so easily," said Dr Wendy Brown (UCL Chemistry). "Our plasma globe can also be viewed through a spectroscope, allowing viewers to see the distinct emission from the different atoms in the plasma."

'Seeing the Unseen' compares images of an interstellar cloud in the visible and infrared, demonstrating how using infrared light allows scientists to see inside star-forming regions. 'Reproducing Space' employs a static high-vacuum chamber, illustrating the lengths to which it is necessary to go in order to achieve the very low temperatures and pressures of interstellar space in the lab. The final hands-on exhibit is 'Life in a Bottle', where a water-based reaction mixture is excited by a spark from a high-voltage discharge circuit to produce complex molecules.

The show was such a hit with young and old alike at the 2004 exhibition, that it has gone on tour in France, Greece, at the Royal Observatory Greenwich, at UCL, and at the Open University and it made a welcome return to the Royal Society Summer Science exhibition in Glasgow in 2006. Dr Brown said: "The team feels that the exhibit projects a positive image of chemistry working closely with physics and astronomy, to attempt to answer some of the fundamental questions of importance in understanding the evolution of the universe and life."

To find out more, visit the 'Stars 'R' Us' web site