Two researchers from UCL Mechanical Engineering will be competing in the new series of Channel 4's 'Scrapheap Challenge'. 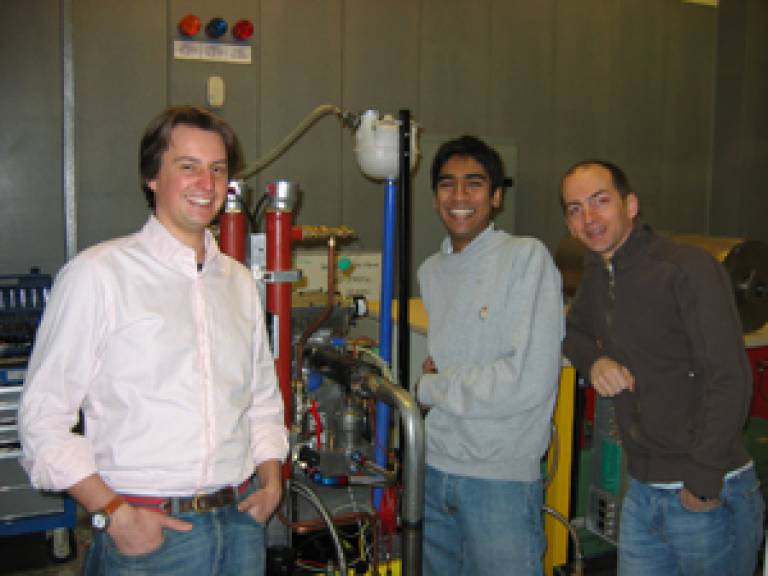 Rishin Patel and Zane Van Romunde, research assistants at the thermodynamics lab in the UCL Department of Mechanical Engineering, will form half of 'The Engine Eggheads' team. They are joined by Paul Loustalan (UCL Mechanical Engineering, 2001) and a fourth team member who will be allocated by the show. Rishin said: "We won't meet the fourth member until the night before the challenge, and we have no idea what the challenge is yet. We don't know what we're letting ourselves in for."

The team will have ten hours to design and build a machine for a specific task, using only the materials available to them on a giant scrapheap. At the end of the process, their completed machine has to out-perform another team's. About the unknown nature of the challenge, Zane said: "The general consensus is that anything motoring-related would be to our advantage, but in some ways it would be interesting to move out of our own sphere and try something new."

On the show, they could be asked to construct almost anything. Past challenges have included the construction of underwater cars, off-road milk floats and, in last season's grand final, even a light aircraft. Zane said: "I wouldn't say it was daunting, but it won't be a walk in the park."

Filming on the set, at a military base in Hampshire, begins in April and takes place over four days. But even getting as far as the first round has required a lot of work. Entry into the competition required the UCL team to make a five-minute film in which they constructed a machine from scratch. Using discarded bicycle bungees and some old pieces of metal framework, they built a catapult which shot steel down a corridor in the thermodynamics lab.

This is not the first time Rishin, Zane and Paul have competed together in a team. Paul designed a car chassis in 2001, which Rishin and Zane - then UCL Mechanical Engineering undergraduates - built and developed as part of the international Formula Student competition for engineers. The ongoing project has since been passed down to a team of current final-year undergraduates in UCL Mechanical Engineering, though Rishin and Zane remain on hand to advise on ideas about the vehicle's development.

Now in its eighth year, 'Scrapheap Challenge' has attracted a cult following. The new series will be aired on Sunday evenings from September.

To find out more, use the links at the bottom of the article.