An interview with His Excellency Sheikh Mohamed Bin Issa Al Jaber at UCL on 27 March 2006 provided some fascinating insights into Middle East politics, education and culture. 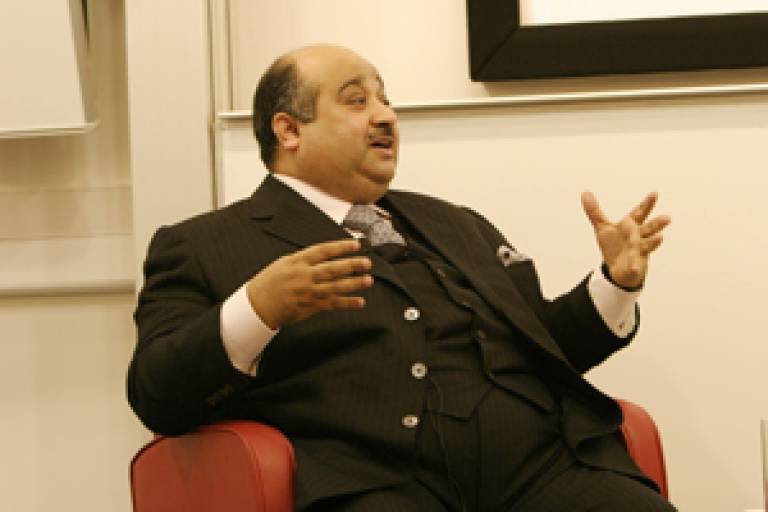 Sheikh Mohamed is the Founder and Chief Executive of MBI International and patron of the MBI Foundation. A successful self-made businessman, he devotes much of his time to promoting education and democracy throughout the Arab world. In 2005 he became a UNESCO Special Envoy, representing the Director-General on education, human rights, tolerance and cultures to build peace and democracy.

The interview was introduced by Professor Malcolm Grant, President and Provost of UCL, who discussed the Sheik's life works in context of UCL's global perspective.

Professor Michael Worton, UCL Vice-Provost (Academic & International) then led the interview with Sheikh Mohamed with some searching questions about the current situation in Iraq, as well as the recent election of the Palestinian party Hamas.

Sheikh Mohamed has been a vociferous public advocate for regime change in Iraq, and he told Professor Worton that he had felt "obligated to stand behind Iraqis and be loud and clear" about the need to end Saddam Hussein's oppressive regime.

At a time when many people have become pessimistic about the current situation in Iraq (and shortly after the former Iraqi interim Prime Minister Iyad Allawi has warned of civil war in the country), Sheikh Mohamed still believes that Iraq will see more prosperous times in the near future, citing the country's improved economic situation and new voting system.

On Hamas, Sheikh Mohamed again took an optimistic approach, reflecting on the party's social work in the early days of its foundation, and taking the long view that the Hamas of the future could be quite different from today.

The Sheikh's positive and proactive stance was nowhere better reflected than in his views on educational reform in the Arab world. His work with UNESCO into this area aims for an updating of the curriculum and wide retraining of teaching staff to ensure that acquire the education that they need to compete on the global stage, ensuring that Arab nations are not held up by what he called an "illusion of wealth" - such as money from foreign aid or oil supplies - but by a true wealth embedded in the education and skills of the nation.

To find out more about UCL's links with South Asia and the Middle East, use the link at the bottom of this article.