New WHO TB strategy launched in the 'Lancet'

This week's edition of the 'Lancet' features a set of ten essays on tuberculosis, to coincide with World TB Day on 24 March 2006. 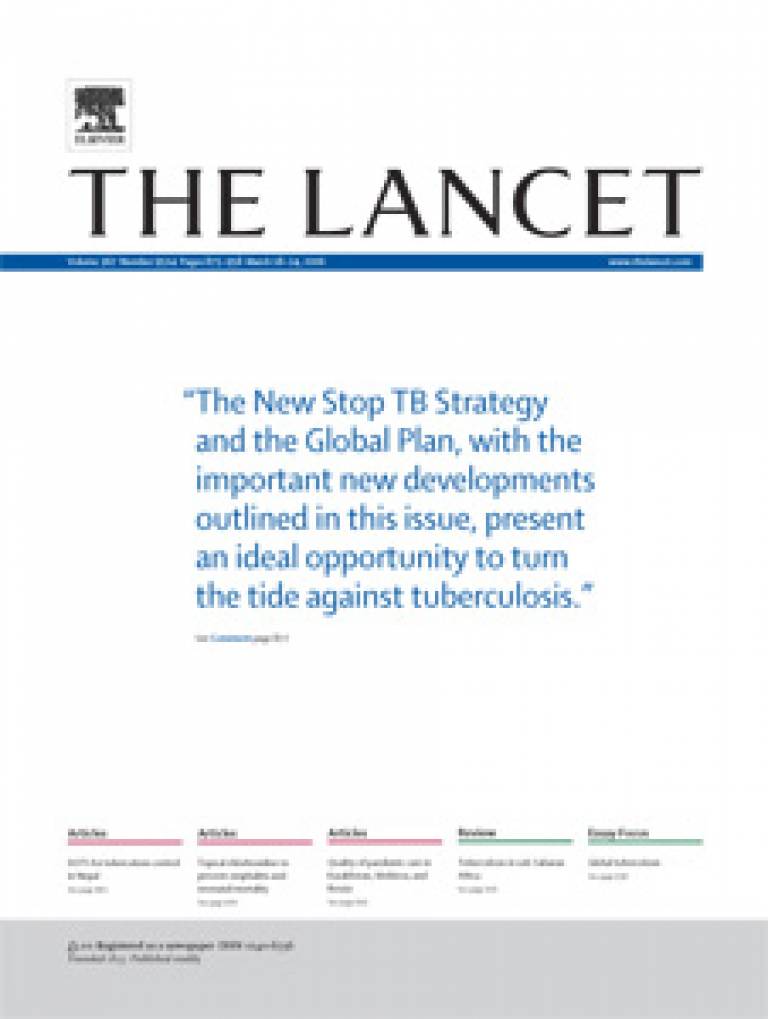 The date is of particular significance this year because of the recent launch of a new Global Plan to Stop TB 2006-2015 by the Stop TB Partnership, part of the World Health Organization (WHO). One of the Lancet articles, by Dr Mario Raviglione, outlines the new WHO strategy for TB, which takes place within the framework established by the Global Plan.

Professor Ali Zumla, Director of the UCL Centre for Infectious Diseases and International Health, played a leading role in collecting together the articles, which come from some of the world's leading researchers into TB and its treatment. In a joint introduction to the essays, written with The Lancet's Senior Editor Zoë Mullan, he wrote: "The tuberculosis fraternity has unified in stating its strategy. Now it is up to developing country governments to fully commit resources to tuberculosis control, and for donors to provide catalytic financial aid."

They concluded their Lancet commentary by stating: "The new Stop TB Strategy and the Global Plan, with important developments outlined in this issue (of the 'Lancet'), present an ideal opportunity to turn the tide against tuberculosis." At a press conference held by the WHO Stop TB Partnership at the 'Lancet' offices today, Professor Zumla stressed that the donor community should act now to reverse the extremely high current global mortality rate due to TB - a phenomenal 5000 deaths every day. He also warned European governments against complacency, since an ominous epidemic of multi-drug-resistant (MDR) TB lurks around the corner in Eastern Europe.

Professor Zumla's own work on TB is extensive. He is a vocal advocate for the promotion of an interdisciplinary approach to tackling the problem. In a book published in 2004, 'The Return of the White Plague', he argued that, while medicines that can cure TB have existed for decades, it persists as the world's most deadly infectious disease because of social and political factors. Underlying causes, such as poverty, deprivation and the failure of governments to introduce TB programmes, have prevented effective widespread treatment.

In January this year, the Stop TB Partnership released The Global Plan to Stop TB 2006-2015 at the World Economic Forum in Davos, Switzerland. The plan puts in place a framework for combating TB, including the expansion of directly observed treatment short-courses (DOTS), the WHO's recommended strategy for fighting the disease.

The DOTS strategy involves five key elements, which are summarised as: Sustained political commitment; access to quality-assured TB sputum microscopy; standardised short-course chemotherapy to all cases of TB; uninterrupted supply of quality-assured drugs; and a recording and reporting system that enables the assessment of outcomes. DOTS has resulted in the successful treatment of over 20 million cases of TB worldwide over the past decade.

The new WHO strategy will seek to build on the success of DOTS by broadening its scale and applying it to cases of TB with HIV/AIDS and MDR TB. The Stop TB Partnership will also work to introduce new TB drugs and vaccines and has established the Advocacy, Communications and Social Mobilization working group, which aims to tackle the social factors behind the disease. Professor Zumla has strongly endorsed the Plan and feels that this chance to get TB under control should not be missed by donor countries and funding agencies.

Image 1: Front cover of the 'Lancet'