The winners of the London Entrepreneur's Challenge 2005/6 were announced at the competition's final at UCL on 14 March 2006. 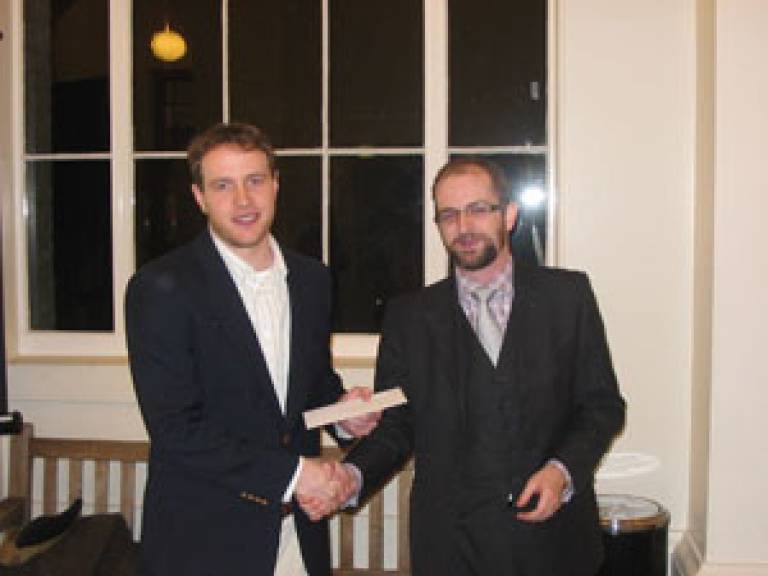 The annual business plan competition is open to staff, students and alumni of UCL and the London Business School, and collaborative teams are encouraged.

Throughout the afternoon of the final, the judging panel of entrepreneurs, venture capital experts and technology transfer experts listened to the finalists present their ideas. Their marks were added to those that had already been awarded for the teams' written business plans and the results were announced at a reception in UCL's North Cloisters that evening.

DataPoint, led by Mr Ethan Smith (UCL Human-Computer Interaction), took the E-Challenge champion prize of £5,000 for their development of a computer display for the visually impaired. The screen is made up of dots instead of pixels that can be raised or lowered on command, creating Braille text and images.

Swarm Technologies claimed the postgraduate, staff and alumni category prize of £3,000. Swarm intends to offer oil and gas producers a monitoring system for pipelines that uses the flow inside pipes to power monitoring nodes placed along it.

The undergraduate category was awarded to Ed Pettman (UCL Human Genetics) and Sally Broom (UCL Human Sciences) of EKCP Projects, which would develop properties suitable for disabled people that will also appeal to non-disabled buyers.

The Provost's Prize - awarded to the team that demonstrates the best combination of UCL and London Business School skills - was won by PicsPlus, a proposal for an online image processing service that allows users to alter light sources and other conditions for their digital images.

Competition judge Mr Peter Sinden, Senior Technology Transfer Manager at UCL Ventures, said: "I was extremely impressed with how polished the contestants were. Having seen the initial presentations before Christmas as well as the finals this time, it was evident how much work they had all put in and how much they had gained from the experience. The social aspect was clearly important and there was apparently a lot of camaraderie as well as healthy competition. Overall, the presentations and the plans were excellent. It was clear that many of the contestants had a real desire to continue with their projects after the competition was over. Well done to all!"

E-Challenge founder and organiser Mr Tim Barnes said: "We would like to congratulate and thank all of those who took part this year. Roll on the next Entrepreneurs' Challenge, which will kick off in September 2006."

To find out more about the competition, use the link at the bottom of this article.