Gerta Vrbová, whose autobiography 'Trust and Deceit; A tale of survival in Slovakia and Hungary, 1939-1945' was launched last night, has travelled a long way to become Emeritus Professor of Developmental Neuroscience at UCL Anatomy &amp; Developmental Biology. 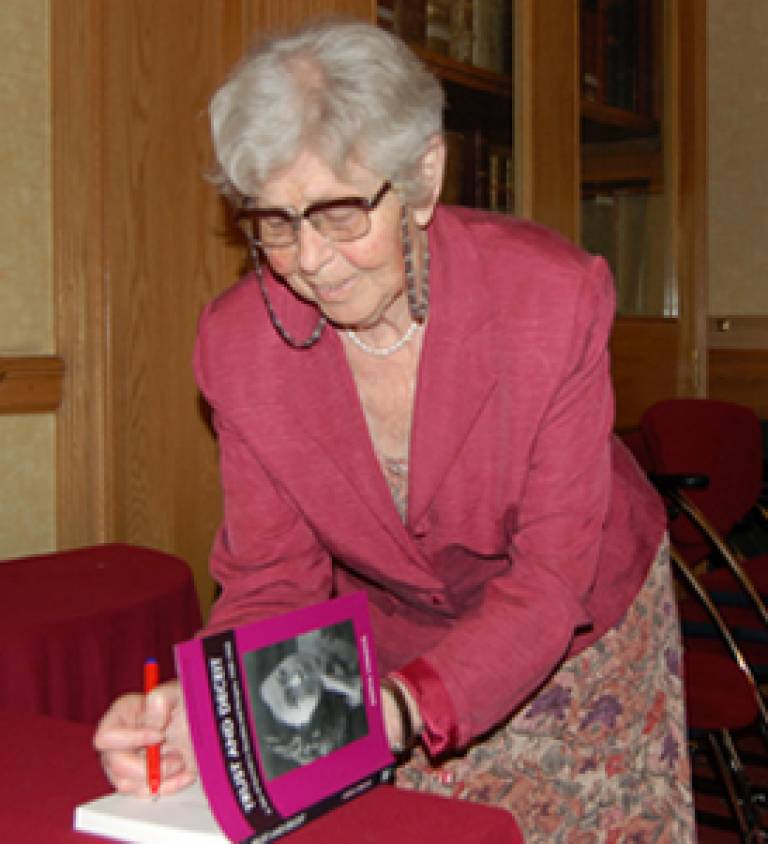 When Vrbová was 12 years old, the Second World War broke out. As a Slovak Jew, her life was in grave danger for the six years that followed. Fascism destroyed the coexistence of Jews with their Slovak neighbours, and the threat of deportation to concentration camps forced her family to flee to Hungary, where they lived under an assumed identity. When her father was arrested as Hitler tightened German control over Hungary, she fled back to Slovakia with her mother, assuming another false identity.

In summer 1944 she met a childhood friend, Walter, who gave her his first-hand account of Auschwitz. Later known as Rudolf Vrba, he was one of only five Jewish escapees from Auschwitz, and his testimony, produced with Gerta's help, alerted Allied forces, the Jewish Council in Hungary, and the Vatican, of the Nazi's Final Solution. The couple later married and had two children - Vrbová is the feminine of Vrba in Slovak.

Knowing what she knew, Gerta took a bold decision after the remaining Jews in Slovakia were rounded up. Having been denounced and handed over to the Gestapo, she escaped, risking certain death if caught. Alone now, she spent the rest of the war in Budapest, living as a Hungarian refugee from Russian-occupied Hungary. She survived both the Russian siege and the round up of Jews.

By the end of the war, Professor Vrbová was 18 years old, and had spent her teenage years in hiding, living under assumed identities and forging documents to stay one step ahead of the Gestapo.

Now 79, Professor Vrbová has written an account of this part of her life. 'Trust and Deceit; A tale of survival in Slovakia and Hungary, 1939-1945' was launched at a reception at the Royal Society of Medicine in June 2006. It is a powerful account of a young woman living on her wits, quickly learning whom she could trust and whom she had to deceive in order to survive.

But the book only tells part of the much longer story of Professor Vrbová's life. The question that begs to be asked is how a girl with very little formal education at the age of 18 (Slovakian schools were closed to Jews after 1939) came to finish a distinguished scientific career as an Emeritus Professor of Developmental Neuroscience at UCL. Fortunately, she has included an epilogue in her book, which outlines some of this story.

Following the war, Professor Vrbová received a fast-tracked education at a state-run school in Bratislava then moved to Prague, where she studied medicine, and eventually joined a research group at Prague university. Her first marriage yielded two daughters, but failed after a few years. She later met an English scientist, with whom she hoped to settle in the West - almost an impossibility at the height of the Cold War in the 1950s. However, as an academic she was able to gain permission to travel between the Soviet states of Eastern Europe, and on a visit to a conference in Poland in 1958, she decided to make her escape. Travelling on foot across the mountains back to Czechoslovakia, she collected her children aged four and six, crossed the Polish Czechoslovak border with them and took a train to Warsaw. Having unofficially entered the names of children on her passport, she was able to obtain a transit visa for Copenhagen, from where, after a year, she was able finally to come to England.

Despite her delight at the success of the launch - which ran out of copies of her book and was attended by over fifty people, including two old friends from Poland and one from Sweden - Professor Vrbová is less enthusiastic about the prospect of writing a second book to document her experiences of life in post-war Eastern Europe and England: "During the war, everything was life or death. The dangers later on were not life-threatening." However, reflecting on the risk she took in fleeing Eastern Europe, she said: "Thinking about it now, I realise that the consequences could have been disastrous for my children."

Fortunately, the many escapes she has made over the course of her life have all been successful. In England, she was able to develop her scientific career further, and she has published over 300 papers on developmental neuroscience.

'Trust and Deceit; A tale of survival in Slovakia and Hungary, 1939-1945', by Gerta Vrbová, is published by Vallentine Mitchell.

Image: Professor Gerta Vrbová at the launch of 'Trust and Deceit'