A new paper published in 'Advanced Functional Materials' describes the results of a UCL collaboration which has yielded a new type of bioactive glass, offering great promise for bone regeneration applications. 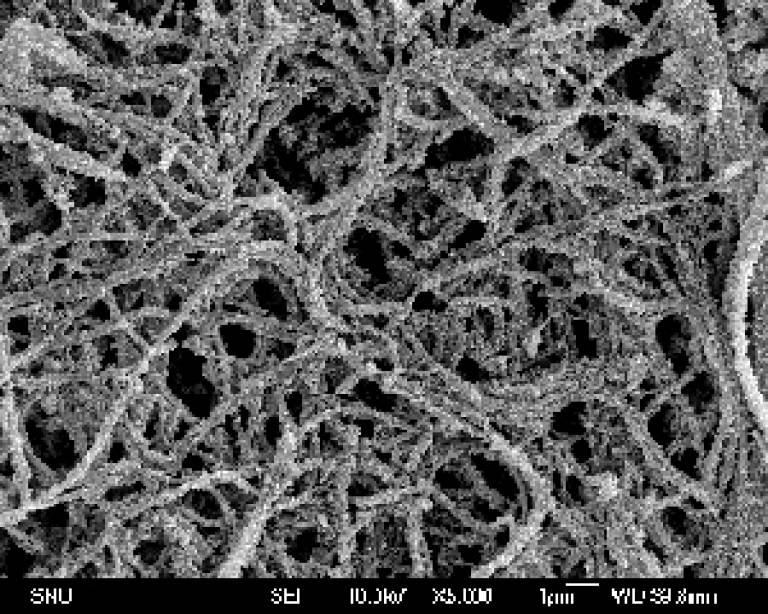 According to the paper, entitled 'Production and potential of bioactive glass nanofibers as a next-generation biomaterial', in vitro trials have shown that the new material has high bioactivity (the promotion of cell growth), which means that it can be used effectively for growing bone.

There are two key elements in the make-up of the material that give it these properties: its chemical composition and its production process. Chemically, the material is a glass made from a sol-gel, a gel in which the inorganic element of the glass is bound to organic molecules that are then burned off at relatively low temperatures. Sol-gels are an increasingly popular means of making glasses because they require less energy to produce than conventional glasses and also allow unusual glass compositions to be obtained.

Professor Jonathan Knowles, UCL Eastman Dental Institute, working with scientists from Korean universities, took a sol-gel and applied a process known as electrospinning. They passed an electric current through the jelly-like sol-gel as it flowed through a nozzle. By 'pulling' the sol-gel across a very high voltage difference between an electrical anode (the nozzle) and an earthed metal plate, they shaped the material into a nanofibre structure.

The collaboration of Korean scientists with Professor Knowles had its foundation when Professor HE Kim (Seoul National University) asked Professor Knowles to go to Korea and speak at a conference. Later, HE Kim's postdoctoral student, HW Kim (Dankook University), came to work for a year at the UCL Eastman Dental Institute, funded by the Royal Society. It was there that much of the work into this new glass was conducted.

The chemical composition and the nanofibre structure of the glass combine to give it its high bioactivity. The reason for the enhanced bioactivity is not clear, but Professor Knowles suggests it may be because bone is high in collagen, and the fibres in the material are of similar size to collagen, thus making it easy for new structures to grow onto it.

The glass has also proved very adaptable for use in making larger structures, for instance by meshing the fibres into sheets or three-dimensional shapes. As such, the material will be of use to tissue engineers in the growing of bone or other maxillofacial applications..

Image: Sol-gel nanofibres with apatite precipitation after only one day