By turning the traditional drug development process on its head and employing existing automation technologies in a novel way, a team from UCL looks set to dramatically reduce the cost of new drugs. 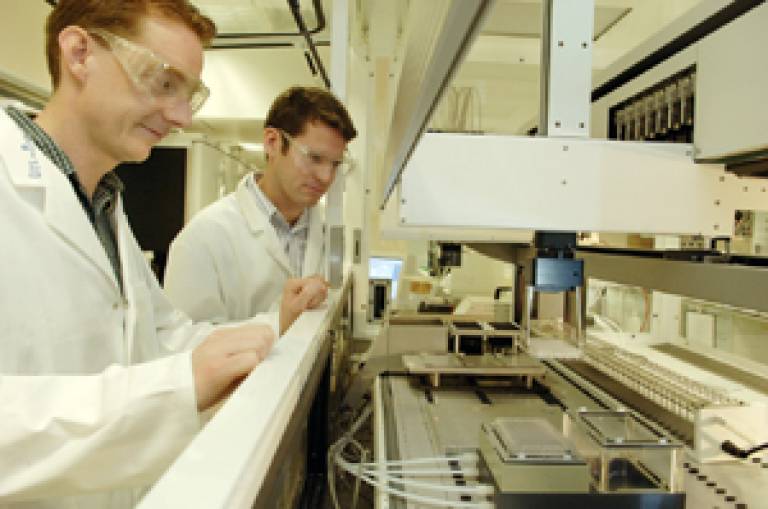 Dr Paul Dalby, Professor Gary Lye, Dr Chris Mason and Dr Farlan Veraitch of the UCL Advanced Centre for Biochemical Engineering are working with both industry and government to ensure these vital savings can be made in the near future.

The team, who have secured £1.2m of funding from the DTI, are working with Syntaxin Ltd, a drug development company, to look into tools to accelerate bioprocess development. They want to establish a new approach whereby manufacturing issues  are addressed at the start of new drug development, as they believe this will reduce costs significantly.

"Drug companies have always tended to concentrate on the early stages of drug discovery, leaving the manufacturing side of the process until last because costs were never really an issue. However, with recent high profile cases such as the cost of the breast cancer drug Herceptin, manufacturing costs are now very much at the forefront of public debate. These costs can be dramatically reduced by incorporating manufacturing issues into the process at an earlier stage." explained Professor Lye.

The team are not only championing a change in the process of drug development -they are also pioneering a way to speed up the translation of research into manufactured product. By using  laboratory robots and a standard bit of lab kit - a microwell plate - the researchers hope that bioprocess data can be collected more quickly, so that drugs can be developed faster and brought to the market sooner.

"The fermentation of cells can take eight hours, but because we now operate 96 fermentations in parallel using microwell plate technology, we can save an enormous amount of time and cut years off  process development. We are basically using standard kit, but in a different way to its  traditional use for drug discovery ", said Dr Paul Dalby.

The technology is generic and can be applied to any type of new drug, although the Syntaxin project is primarily interested in the development of drugs to combat chronic pain. A previous DTI award of £1.2m, received in June 2005, has enabled the team to work with Stem Cell Sciences (UK) Ltd to combine stem cells with state-of-the-art process engineering and automation for the development of bioprocess technology to produce a straightforward, robust stem cell resource for high throughput  chemical library screening.

The UCL Advanced Centre for Biochemical Engineering not only works with  over 30 industrial partners as part of EPSRC funded consortia but with 11 UCL groups including the UCL Wolfson Institute and the UCL Department of Biochemistry and Molecular Biology and the UCL Department of Chemistry. Their principal aim is to help underpin the rapid discovery and translation of new molecules into safe, cost-effective medicines. To find out more about their work, use the link at the bottom of this article.